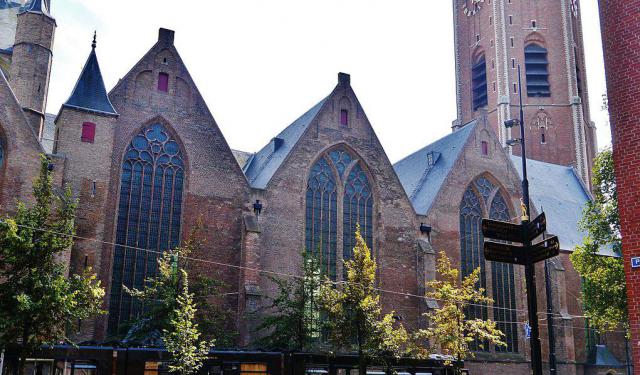 Image by Zairon on Wikimedia under Creative Commons License.

On this tour, you will find a mix of churches, both inside and outside the heart of The Hague. With a mission to guide the religious community of The Hague through its relationship with Jesus, local churches place great importance on worship and living in God's presence. Take this tour to visit churches that are popular with both locals and tourists.
How it works: Download the app "GPSmyCity: Walks in 1K+ Cities" from iTunes App Store or Google Play to your mobile phone or tablet. The app turns your mobile device into a personal tour guide and its built-in GPS navigation functions guide you from one tour stop to next. The app works offline, so no data plan is needed when traveling abroad.

Nieuwe Kerk is a highly unique Protestant church of the 17th century design. While the majority of Protestant churches at the time preferred a rounded floor plan, architect Pieter Noorwits designed two hexagonal areas, acting in accordance with the Protestant principle of centralization. Building of Nieuwe Kerk began in 1648 at the time of Protestant conquest in The Netherlands, and it was finished just a year later.
Image by M.Minderhoud on Wikimedia under Creative Commons License.
Sight description based on wikipedia
2

The Evangelical Lutheran Church is located on what was once a bomb cover. In 1751, the Lutheran parish decided to construct a larger church on the place where the bomb cover had been situated since 1615. The architect Pieter de Swart prepared a design for the front of the church. He worked with an architect from Amsterdam, who designed the interior. Construction began in 1758 and on December 13, 1761, the building was completed.
Image by Jojojoe on Wikimedia under Creative Commons License.
3

Grote of Sint-Jacobskerk is a landmark Protestant church. The building is located on the Torenstraat, named for its high tower. Together with the Binnenhof, it is one of the oldest buildings in the Hague. Members of the House of Orange-Nassau have been baptized there. The Grote Kerk (15th and 16th centuries) has a fine vaulted interior, and contains some old stained glass, a carved wooden pulpit, a large organ and interesting sepulchral monuments, and some escutcheons of the knights of the Golden Fleece, placed here after the chapter of 1456. It is remarkable for its fine tower and chime of bells, and contains the cenotaph monument of Jacob van Wassenaer Obdam, designed by Cornelis Moninckx and sculpted by Bartholomeus Eggers in 1667, and the renaissance tomb of Gerrit van Assendelft (1487 – 1558).

The church's six-sided tower is one of the tallest in the Netherlands. There are 34 panels with shields and names of knights of the golden fleece. The richly carved wooden pulpit was made in 1550. The church endured a fire in 1539, and the stained glass windows were repaired by leading glass artists. Charles V, Holy Roman Emperor, who visited the church after the fire, sponsored two windows by the Crabeth's that due to their royal origin are the only two windows that have survived up to the present day.

Image by Zairon on Wikimedia under Creative Commons License.
Sight description based on wikipedia
4

St. Theresia of Avila was built in 1839 in Neoclassic style. It is a handsome old church with a huge entryway. The entrance was built before the church itself, most likely in the 17th century. After the 80 Years War finished in 1648, the Republic showed little tolerance toward Catholics, but construction of the church was allowed for financial reasons.
Image by Andreas Praefcke on Wikimedia under Creative Commons License.
5

The Old Catholic Church houses a religious sect which owes its survival to a split in the Roman Catholic Church in 1702. The church has a Baroque interior and was in all probability designed by a French-Protestant immigrant and significant architect during that period. During the Reformation, Catholicism was forbidden, but things changed after the French King Louis XIV attacked the Republic in 1672 and held the area until 1674. Catholics paid enormous sums of money to be allowed to meet in churches since their religious institutions were not recognized at the time.
Image by Loraine on Wikimedia under Creative Commons License.
6

The Walloon Church in The Hague is constructed in the very modest Neoclassical style, but it is the biggest church in Holland. Its construction was arranged and controlled by King Lodewijk Napoleon in 1807 as a recompense for granting the chapel of the Walloon Protests to the Catholics. This church was attended by prominent citizens of The Hague. Since the foundation, The Walloon Church has enjoyed support from the Gallicise court and the Dutch military.
Image by Wolfgang Sauber on Wikimedia under Creative Commons License.
7

The history of Kloosterkerk begins around 1400. In 1393, the land where the present church is located was given to the Amsterdam St. Andrew Monastery, which sold the land in 1394. At that time, there were several castles in the area, yet by the end of the fourteenth century all of them had been demolished. In 1420, the church suffered a major fire. The government of Holland for many decades had kept their documents in the church. Back in the 15th century it was significantly smaller than today. In about 1540 the church was enlarged.
Image by Łukasz Waligórski on Wikimedia under Creative Commons License.
8

The Mennonite Church is one of a small number of Neo-Romanesque churches in The Hague. It was constructed by the Mennonites in 1885-1886 as a reaction to the ornate Neo-Gothic style. K. Stoffels designed the church, which is distinguished by its wonderful triangular section of wall that has a rose window in the center of it.
Image by Rudolphous on Wikimedia under Creative Commons License.

The Hague is a historic city and one of the most important cities in the Netherlands. It has a rich collection of impressive landmarks and memorials that date back hundreds of years, but are still in an extraordinary condition. Take this tour to visit some of the most notable landmarks in The Hague.