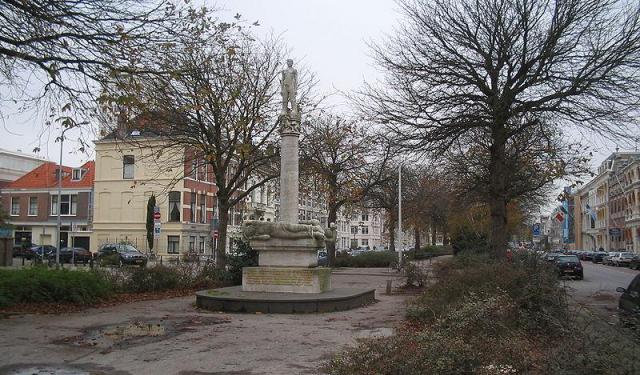 Image by M.Minderhoud on Wikimedia under Creative Commons License.

The Hague is a historic city and one of the most important cities in the Netherlands. It has a rich collection of impressive landmarks and memorials that date back hundreds of years, but are still in an extraordinary condition. Take this tour to visit some of the most notable landmarks in The Hague.
How it works: Download the app "GPSmyCity: Walks in 1K+ Cities" from iTunes App Store or Google Play to your mobile phone or tablet. The app turns your mobile device into a personal tour guide and its built-in GPS navigation functions guide you from one tour stop to next. The app works offline, so no data plan is needed when traveling abroad.

Gebroeders Maris is a monument erected to pay homage to the Maris brothers for their contribution as artists to the culture of Holland. Each of the three brothers held a position at The Hague School. Jacob became well known for his sceneries and depictions of towns. Matthijs’s style was more creative and ingenious, while Willem achieved success predominantly through his artwork depicting cows and ducks.
Image by Wikifrits on Wikimedia under Creative Commons License.
2

The monument of van Karnebeek was erected in 1916. Abraham Pieter Cornelis van Karnebeek, who lived from 1836 until 1925, was an equerry and Dutch conservative politician. During his career, he was a diplomat and an official Commissioner King in Zeeland. He was later Minister of Foreign Affairs. From 1890, he was an active Member of Parliament of Rotterdam and later Utrecht. While in Parliament, he voted against compulsory education.
Image by Wikifrits on Wikimedia under Creative Commons License.
3

The Peace Palace (Vredespaleis) is often called the seat of international law because it houses the International Court of Justice (which is the principal judicial body of the United Nations), the Permanent Court of Arbitration, the Hague Academy of International Law, and the extensive Peace Palace Library. In addition to hosting these institutions, the Palace is also a regular venue for special events in international policy and law. The Palace officially opened on August 28, 1913, and was originally built to provide a symbolic home for the Permanent Court of Arbitration, a court created to end war which was created by treaty at the 1899 Hague Peace Conference.
Image on Wikimedia under Creative Commons License.
Sight description based on wikipedia
4

The World Peace Flame is a prominent symbol of mankind's shared desire for peace. It was installed in 2004. Hundreds of people came together to make this futurist dream into a true mark of hope for all of the human race. It was an extraordinary gesture of solidarity. The stone represents the desire and commitment for peace and was inaugurated in 197 countries around the world. In April 2004, ambassadors from a number of different countries joined together to give their approval to a Joint Statement for Peace.
Image by Blacknight on Wikimedia under Creative Commons License.
5

Nassauplein is a long rectangular square in the Archipelago Area that has only 37 houses. Initially, there was a moat, but in 1883 it was vaulted. There are many houses here built in the eclectic style of the 19th century, a number of which are private buildings. There are also numerous public buildings, including several embassies and the Dutch-German Chamber of Commerce. Here you can find a museum named Damesleesmuseum that was founded in 1894. The museum provides you the opportunity to read peacefully and broaden your horizons. A little bit further along the square, there is the Lord's New Church and two very old monuments.
Image by M.Minderhoud on Wikimedia under Creative Commons License.
6

The Monument of Independence is situated on the roundabout and a square called Plein 1813. It is one of the most famous symbols of The Hague. The monument consists of many elements and has several inscriptions. It is a broad, square pedestal where a bronze statue of a victorious Dutch woman rests. On the front is the statue of William I and on the sides there are three characters who led to his failure. On both sides are some female figures.
Image by F.Eveleens on Wikimedia under Creative Commons License.
8

The Statue of Queen Wilhelmina is found on the Paleis Noordeinde. Wilhelmina was born on August 31, 1880. She was Queen of the Netherlands between 1890 and 1948, leading the Netherlands for a term of fifty-eight years. Her reign was the longest of all Netherland’s monarchs. Her period of influence was during the First and Second World Wars, the economic turmoil of 1933, and the decline of the Netherlands as an important colonial empire. Outside of the Netherlands she is mainly remembered for her role in World War II, as she struggled greatly for the Dutch people.
Image by Joris1919 on Wikimedia under Creative Commons License.
Sight description based on wikipedia
9

This equestrian statue of William I was recently restored. It dates back to 1924. The statue is located in the historic part of The Hague and is illuminated at night. William I was King of the Netherlands from 1772 to 1843. The statue is in a beautiful location, surrounded by greenery and in close proximity to most of The Hague’s touristic attractions, including museums, places of worship, and medieval and modern buildings.
Image by Joris1919 on Wikimedia under Creative Commons License.
10

The unveiling ceremony of the equestrian statue of William II was held in 1924. The statue was created by the Luxembourg designer A. Mercenier (1845-1916). Prince William II is depicted as the supreme commander of the army. At the corners of the pedestal are four allegorical figures. At the base of the monument was a leaden casket. Inside the casket were two biographies of King William II from 1849 and 1852. The casket was removed temporarily in 1993 for restoration, but it was unfortunately affected by moisture and irreparably damaged.
Image by F.Eveleens on Wikimedia under Creative Commons License.
12

The Frog with Umbrella is an attractive sculpture in an accessible location. The huge statue is near to a gallery of sculptures in the core of the city. The sculpture 'Frog with Umbrella' was a present from a foundation on The Hague's 750th anniversary. The inauguration of this sculpture was one of many celebrations held around the city for the anniversary.
Image by Karel Appel on Wikimedia under Creative Commons License.
13

The monument to Willem van Oranje is located on Oranje Plein. Willem was one of Holland's favorite emperors. He was a leader of the noble resistance and a supporter of religious freedom in the Netherlands. After converting to Protestantism, he led the military rebellion against the Catholics, yet he always insisted on religion tolerance. On December 31, 1564, William van Oranje addressed the Council of State, saying, "I cannot approve of a kingdom that wants to rule over the conscience of its people and take away their freedom of religious belief."
Image by Joris on Wikimedia under Creative Commons License.
14

This monument was raised to honor Hertog Karel Bernard van Saxen Weimar (1792-1882) who was son of the Grand Duke Karl August. He received an excellent education, which later enabled him to earn an honorable name in the field of literature. At the age of fourteen, he was a volunteer in the battle of Jena in Hohenlohe, and when his father joined the Rhine Confederation he joined as well. As Major of the General Staff, he participated in the field expedition in 1809.
Image by Pvt pauline on Wikimedia under Creative Commons License.
15

In the middle of Regentesseplein in The Hague lies a four-sided stone. It is a stone obelisk from 1905, which commemorates the popular Koningin -Moeder Emma. The obelisk is decorated with allegorical images of women and a portrait of Emma in bronze. On the monument can be read the inscription: "In grateful memory and commemoration of Koningin -Moeder Emma." Koningin-Moeder Emma was the Princess of Orange-Nassau, the wife of King William III and Queen Regent of the Netherlands from 1890 to 1898. As regent, she assumed royal authority for a few days before the death of her husband.
Image by F.Eveleens on Wikimedia under Creative Commons License.