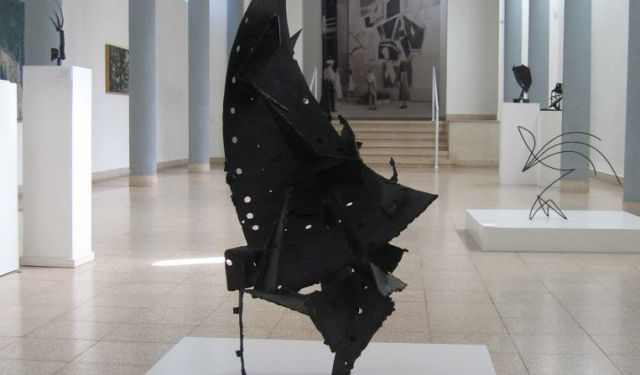 Image by Talmoryair on Wikimedia under Creative Commons License.

Haifa is one of the most beautiful cities in the Holy Land. Besides its great spiritual value, Haifa is also the cultural capital of Israel. It’s the site of the first ever theatre in the Holy Land, and is also home to a large number of museums. Take this tour to discover the most popular museums in Haifa.
How it works: Download the app "GPSmyCity: Walks in 1K+ Cities" from iTunes App Store or Google Play to your mobile phone or tablet. The app turns your mobile device into a personal tour guide and its built-in GPS navigation functions guide you from one tour stop to next. The app works offline, so no data plan is needed when traveling abroad.

The Tikotin Museum of Japanese Art is devoted to displaying and conserving Japanese artworks and is the only one of its kind in the Middle East. It was founded in 1959, with the assistance and on the initiative of Felix Tikotin (1893-1986) of the Netherlands, and the late Abba Hushi, who was then the Mayor of Haifa. The museum's collection comprises some 7,000 items including paintings, prints, drawings, screens, textiles, ancient illustrated books, ceramics, miniature carvings (netsuke), metal and lacquer work, antique swords and handicrafts, mainly from the 14th to 19th centuries. It also has some modern Japanese artworks. In 1995, a new wing designed by the late Japanese architect Junzō Yoshimura of Tokyo and Israeli architect Professor Al Mansfeld was added to the existing gallery.

Why You Should Visit:
Japan's art in a nutshell! Lots of constant exhibits of 'classical' Japanese art plus regular temporary exhibitions.
Signage is good (in both Hebrew & English); there is a small cafeteria and a pretty sweet gift shop.

Tip:
Might look just a bit overpriced, but check for discounts and consider buying a combined ticket (6 museums in a week for ~15 euro – see the Haifa Museums site).


Image by Asaf Elron on Wikimedia under Creative Commons License.
Sight description based on wikipedia
2

Mané-Katz left his paintings and extensive personal collection of Jewish ethnography to the city of Haifa. Four years before his death, the mayor of Haifa, Abba Hushi, provided him with a building on Mt. Carmel to house his work, which became the Mané-Katz Museum. The exhibit includes Mané-Katz's oils, showing a progressive change in style over the years, a signed portrait of the artist by Picasso dated 1932 and a large collection of Jewish ritual objects.

Why You Should Visit:
If you're into contemporary art from an artist who won the Legion of Honor for his work, stop here.
You won't be disappointed; also there's a beautiful view of Haifa Bay from the top of Mt. Carmel.

Haifa Museum of Art is nestled within a stone building for preservation. The museum showcases the works of Israeli and international artists and unfolds on the one hand the story of Israeli culture from the beginning of the 20th century, and on the other, the place of contemporary art in the age of globalization.

One of the three largest museums of art in Israel, Haifa Museum of Art sprawls over approximately 3,500 sqm and resides in three floors. The museum is an institution and an attraction for artists and art theorists who explore the topics of the history of Israeli and international art, with emphasis on contemporary art, which relate to essence, meaning, and the potential embodied in the museum’s collection.

Why You Should Visit:
Smart use of exhibits on 2 floors, plus air-conditioning, toilets and plenty of space.
Of course there's a shop and a café as well!

The Israel National Museum of Science, Technology, and Space (also known as Madatech) is the home of science and technology in the city of Haifa, and attracts approximately 200,000 visitors each year. The museum, established in 1983, is housed in a historic building that was designed as the first home of the Technion — Israel Institute of Technology, until it relocated to its current campus. The architect was Alexander Baerwald, a German Jewish immigrant, who began working on the building in 1912. On a visit to the Technion in 1923, Albert Einstein planted one of the palm trees in the courtyard, which can still be seen today.

Why You Should Visit:
Very accessible for kids and has lots of different interactive activities and exhibitions.
Most exhibits are good for adults as well, and the collections of old instruments & machines are terrific.

Tip:
Make sure you have a lot of free time, as you might want to dedicate a full day for it!
Best to enjoy the science garden out back in the summer when kids can run into the water-fountain.

The Israel Railway Museum is located at the former Haifa East Railway Station. Owned by Israel Railways, the museum recounts the history of Israel national railway as well as that of the neighboring states, spanning all the way back to 1892. The location itself is an attraction, as it was the shed for the Jezreel Valley branch of the former Hejaz Railway. The museum features a collection of rolling stock, signs, tickets and other items. It has both an indoor and an outdoor section, with the indoor section having been renovated in 2000.

Why You Should Visit:
Interesting spot which incorporates railroad history along with Ottoman & British Mandate history.
Signage is very helpful and you can climb into many of the retired old cars and engines

Tip:
Don't forget to visit the annex across the tracks for some more artifacts and photos.