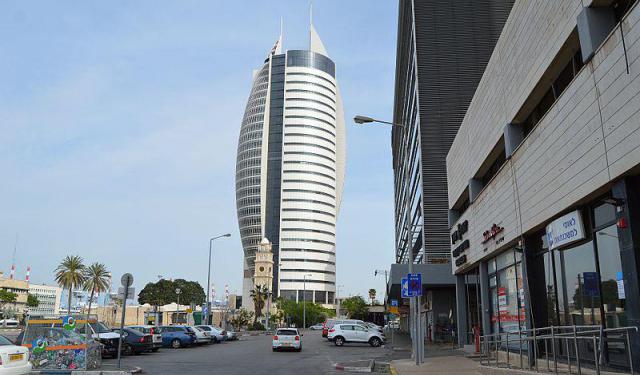 Image by Eurovaran on Wikimedia under Creative Commons License.

Haifa is a city that prides itself on preserving its history and traditions. As a result, today you can still see beautiful buildings around the city that date back to the 1800s, as well as some very picturesque Persian gardens. Take this tour to discover the most impressive buildings in Haifa.
How it works: Download the app "GPSmyCity: Walks in 1K+ Cities" from iTunes App Store or Google Play to your mobile phone or tablet. The app turns your mobile device into a personal tour guide and its built-in GPS navigation functions guide you from one tour stop to next. The app works offline, so no data plan is needed when traveling abroad.

Established in the early 1900s through the German-Jewish Ezrah fund, the Technion school of engineering and sciences was one of only two higher education institutions in what was then known as Ottoman Palestine. (The other was Jerusalem’s Bezalel Academy of Art and Design.) Although the cornerstone for Technion was laid in 1912, courses did not begin until 1924 after much debate about which language to use in the lecture halls. Having first considered German, Technion eventually adopted modern Hebrew as the college language in the wake of the first World War.
Image by ToastieIL on Wikimedia under Creative Commons License.
Sight description based on wikipedia
2

Located in Haifa’s Hadar neighborhood, the City Hall is a historic monument that dates back to the 1950s. It was erected at a significant time for the city when a number of important buildings were constructed and new neighborhoods were created.
Image by Avishai Teicher on Wikimedia under Creative Commons License.
3

Migdal ha Neviim - also known as Prophet's Tower - is named after the street it is located on in the Hadar neighborhood. It was one of the first ever glass buildings in Haifa. Inside you’ll find many shops and even an underground Arab theatre.
Image by Eva Ruth on Flickr under Creative Commons License.
4

The District Government Center in Haifa was planned to combine new and old elements. In contrast with the modern Sail Tower, the promenade leading up to it was designed in an older Middle Eastern style, including mosaic on the floors depicting the history of Haifa. One of the maps depicted dates back to 1773.

Image by Eurovaran on Wikimedia under Creative Commons License.
Sight description based on wikipedia
5

The Templars' Community Building is one of Haifa’s best preserved old buildings. Built in 1869, it was the first building constructed by the Templars in the territory of Palestine. Today it’s home to the Haifa City Museum, where you can find out the history of both the building and the entire city.
Image by Ester Inbar on Wikimedia under Creative Commons License.
6

The German Colony is a vivid example of the Templar’s existence in Palestine. This particular building was erected in 1872, as the plaque on the wall proudly displays. Wonderfully restored, this beautiful building now houses a popular restaurant.
Image by Deror avi on Wikimedia under Creative Commons License.