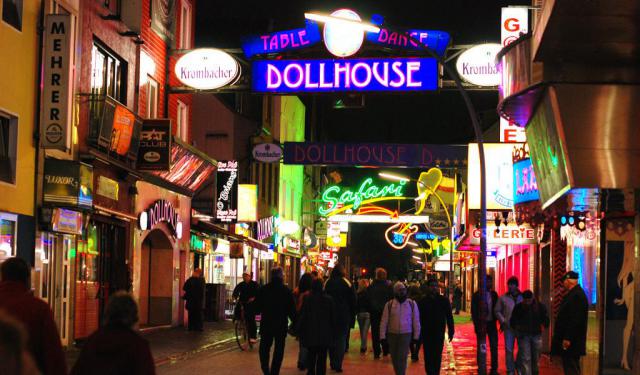 Image by alex.ch on Flickr under Creative Commons License.

Magnificent, modern, breathtaking architectural projects in Hamburg, as well as classical and historical buildings from last century. Take this tour to discover the most attractive architectural constructions of Hamburg.
How it works: Download the app "GPSmyCity: Walks in 1K+ Cities" from iTunes App Store or Google Play to your mobile phone or tablet. The app turns your mobile device into a personal tour guide and its built-in GPS navigation functions guide you from one tour stop to next. The app works offline, so no data plan is needed when traveling abroad.

This ten-storey office building with modern architecture was completed in 2002. It is one of the most spectacular glass buildings. It is located between Hamburg’s central business district and the newly developed Hafen City. The building was designed by Bothe Richter Teherani for Becken Investitionen Company
Image by Staro1 on Wikimedia under Creative Commons License.
2

Afrika Haus is an office building located at 27 Große Reichenstraße, in the Neustadt quarter of Hamburg. It was built by local architect Martin Haller, who also designed the Hamburg city hall, or Rathaus, and the Leiszhalle concert venue. It opened in 1899 and served as the headquarters of the C. Woermann Trading Company, one of the city’s most prestigious shipping organisations. At the peak of Atlantic trade in the late 18th century, Woermann ran one of many successful shipping lines bringing wealth to the city. Others included Hamburg Süd and the Hamburg American Line (now part of Hapag-Lloyd).

Afrika Haus was awarded listed status in 1972. It was given this name on account of the Woermann company’s strong trading history in Africa, much of which is documented on the building’s main staircase. The building’s interior also features a statue of an African warrior, sculpted by Walter Sintenis, and a mosaic featuring the company flag. There are also two large bronze elephants in the entrance foyer, extending the exotic theme. The building’s African flavour even extends to the subtle green and white patterns on its exterior. Afrika Haus remains a private office space, but does offer tours for large groups.

Image by Staro1 on Wikimedia under Creative Commons License.
3

The Church of St. Nicholas is a ruined church located in the centre of Hamburg. Previously one of the five Lutheran Hauptkirchen, or main churches, found within the city’s medieval centre, it was briefly the tallest building in the world. The towering Gothic Revival style spire, which stands 482 feet tall, is all that remains of the church; the main building has been demolished. The ruins are still an important tourist landmark, hosting events and displays, as well as an information centre in the old crypt.

A church has stood in this spot since the beginnings of Hamburg in the 12th century. A pillar of ecclesiastical life in the city for centuries, the previous church building was destroyed in the Great Fire of May 1842. The replacement was devised by British architect Gilbert Scott, and built between 1846 and 1863. The spire was completed in 1874, and made the church the world’s tallest building for two years, before being overtaken by Rouen Cathedral in Northern France. The ruined spire is still Hamburg’s second tallest structure, after the TV Tower.

The great height of the church spire proved to be its downfall, as it became an easy target for Allied Forces planes during World War 2. The nave of the church was destroyed, and the congregation moved to a new facility in an outlying suburban area. Restoration works have included the installation of an elevator within the spire, which takes visitors up to a 75 metre high platform, allowing great views over the nearby Speicherstadt district.

Image by Staro1 on Wikimedia under Creative Commons License.
4

Broschek Haus is located on the corner of Heuberg and Große Bleichen, in the historic Neustadt quarter of Hamburg. Built in 1925 and 1926 as headquarters for the Broschek publishing company, it was designed by renowned architect Fritz Hoger. An example of the Expressionist architectural movement popular in 1920s Germany, the building has an unusual stepped shape, with the upper three floors set back from the lower half of the building. It was initially supposed to be topped with a steeple – one of many extravagant features suggested by Hoger that were ultimately declined by the Broschek directors.

The building is now a luxury hotel, well placed for most of the city’s sights. It served as a publishing house until World War 2, whilst the national newspaper Die Welt was produced here under British occupation in 1946. Whilst the architect’s original plan was never fully realized, there are many interesting features which make Broschek Haus stand out from the many other grand office buildings in central Hamburg. There are gold triangles jutting out from the dark red brick work – when the sun catches the building’s exterior, they give the impression of sails glinting in the sunlight. There is also a small gold statue of the architect, hidden on a corner of this large office block.
Image by Staro1 on Wikimedia under Creative Commons License.
5

First opened in 1908, the Laeiszhalle is the premier classical music venue in a city with a rich musical heritage, from Brahms to the Beatles, who spent many years living in the city. It will soon be joined by the Elbe Philharmonic Hall, a new venue due to open in the HafenCity in 2015. Both venues will work in partnership to attract the most stellar names in the classical field to Hamburg. It wouldn’t be the first time – Richard Strauss, Sergei Prokofiev and Igor Stravinsky have all performed or conducted their own works within this historic concert hall.
Image by Claus-Joachim Dickow on Wikimedia under Creative Commons License.
6

The building of The Hanseatic Supreme Courthouse was planned and constructed at the beginning of the XX century by Lundt Kallmorgen and served as the supreme court of Hamburg, Bremen and Lubeck. Today it also hosts the Constitutional Court and is considered the center of the judicial forum, which includes the criminal and civil courthouses.
Image by Claus-Joachim Dickow on Wikimedia under Creative Commons License.
7

7) The Church of Mercy

Gnadenkirche, or the Church of Mercy, is located on a busy section of Holstenglacis, a road which forms the northern boundary of the Planten un Blomen public park. Built in 1907, it is a neo-Roman style church. It is notable for its distinctive central steeple with a diamond shaped roof. Inside, the small church hall is built around the altar and pulpit, giving the space a theatrical feel. This style is typical of Reformation ecclesiastical architecture. This style dominated protestant religious buildings before 1900, but was less common in the 20th century.

The Church of Mercy is one of several Protestant churches in the city of Hamburg. Traditionally a Catholic city, it fully embraced the reformation, and most city centre churches that are still open are Protestant or Lutheran places of worship. This church, located on a junction where traffic noise is sadly always audible, is close to the Reeperbahn and Landungsbrücken in the city’s bohemian St. Pauli district, north west of the city centre. It is believed to have earned its name due to an image of Mary found within the church which people will travel to the church to view. These churches, generally small city chapels, are known as churches of mercy, or grace chapels.
Image by Alwin Lenck on Wikimedia under Creative Commons License.
8

This is a fascinating building, with its modern, impressive design, for more than 12,000 annual national and international exhibitions and conferences. The visionary architecture aims to express the core idea of the Center's activities: light and transparency.
Image by last hero on Flickr under Creative Commons License.
9

Hamburg is one of Germany’s most historic cities, filled with grand architecture built throughout its history. Its tallest building, however, appears to have landed here from a science fiction film. The Fernsehturm, or TV Tower, was built in 1968 and stands 280 metres tall. Situated on the edge of the Planten un Blomen park, it towers over the surrounding area, in a city that is not renowned for its skyscrapers. Its distinctive shape, which resembles a collection of UFOs, similar to the Space Needle found in Seattle, can be seen from as far away as the Alsten lakes which surround the city.

The tower, like many found in cities across Europe, is used to relay television, telephonic and satellite transmissions. It has previously also served as a major tourist attraction, with an observation deck close to the summit offering spectacular views across the city. A restaurant immediately above the observation deck allowed diners to enjoy these views over lunch. There were even bungee jumps from the deck for the more adventurous visitor. Sadly the tower has been closed to the public for several years, though there are plans afoot to reopen it once building works at the base of the tower are complete.
Image by Kristof Hamann on Wikimedia under Creative Commons License.