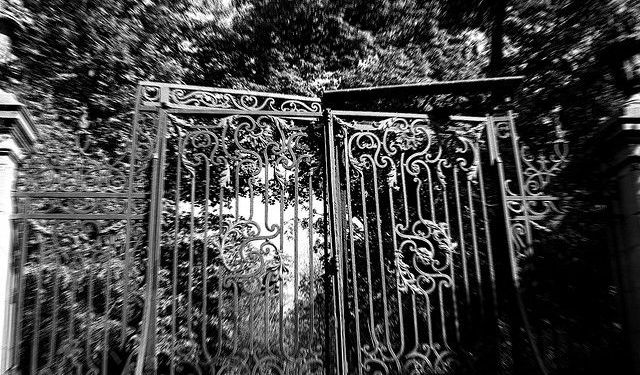 Image by Thomas Claveirole on Flickr under Creative Commons License.

Brisbane is believed to be the most haunted city in all of Australia. Scattered along the downtown area you'll find buildings thought to contain paranormal activity that will send a shiver down your spine. Take our tour to see the most frightening sights in Brisbane!
How it works: Download the app "GPSmyCity: Walks in 1K+ Cities" from iTunes App Store or Google Play to your mobile phone or tablet. The app turns your mobile device into a personal tour guide and its built-in GPS navigation functions guide you from one tour stop to next. The app works offline, so no data plan is needed when traveling abroad.

1) The Old Windmill (must see)

The Old Windmill is Queensland’s oldest surviving building and one of the very few convict built buildings to remain in the city. It was constructed in 1824 to grind maize and wheat to feed the convict population of the colony. Originally a treadmill the mill, but the cloth sails were added a couple of months after its inauguration; however the treadmill was still put to use as a form of punishment. In 1841 two aboriginal men were hung from the windmill after they were deemed to have been guilty of murdering two members of a surveying party at Mount Lindsay.

Around 1849 the windmill was decommissioned and was put to use as Queensland’s first museum and during the 1930s and 1940s it was used as a broadcasting tower. In fact, it is thought that this was the site of the very first TV broadcast in Australia in 1934. In 1866 a cannon was installed at the windmill and was fired each day at precisely 1pm for the residents of the colony to set their watches by.

Image by Figaro on Wikimedia under Creative Commons License.
2

Brisbane City Hall is located in King George Square in city’s CBD and is the center of the Brisbane City Council. The building is widely considered to be one of Brisbane’s best and one of the most ornate and beautiful of Australia’s city halls. The foundation stone of the building was laid in 1920 and construction was completed by 1930. For many years the hall was Brisbane’s tallest building and to this day you can take the elevator to the top of the clock tower and get an impressive panoramic view over the city. The viewing platform is open 10am to 3pm every day for free. The clock tower is 91 meters above the ground and was inspired by St. Mark’s Campanile in Venice, Italy.

Built in the Italian Renaissance style, there is much of interest to see in the building. Above the Corinthian columns at the entrance to the building is the ornately carved tympanum, which was carved by Sculptor Daphne Mayo in the 1930s. It features scenes of the settlement of Queensland with cattle drovers extending out into the lands filled with kangaroos. Inside there are many beautiful rooms, but the highlight is the main auditorium inspired by the Pantheon in Rome.

Image by Lacrimosus on Wikimedia under Creative Commons License.
3

The Brisbane Arcade is a heritage listed building that contains one of the city’s most charming shopping arcades. In addition to its art deco style architecture, the arcade is of historical importance as it was built by one of Brisbane’s most important and mysterious colonial families – the Maynes. The arcade was built by siblings James and Mary Mayne and opened in 1924 on the land their brother Isaac had bought in 1892. The Mayne family was also responsible for donating the land used to form the University of Queensland at the beginning of the 20th century. Their family had a murky past of madness and murder as it was said that their father Patrick had begun his immense fortune with money he had stolen from a man he murdered on the banks of the Brisbane River in the mid 19th century.

There is entry to the arcade from both Queen Street and Adelaide Street and inside there are two levels of retail stores. Each level has ornate floral moldings on the pilasters on the first level there are stylish wrought iron railings. Stepping into the arcade is like stepping back into the jazz age of the 1920s and its romantic nouveau aesthetic. Many of Brisbane’s most respected designers have boutiques here.

Image by monkeyc.net on Flickr under Creative Commons License.
4

The Pancake Manor is one of Brisbane’s best loved and most atmospheric family dining spots. Since 1979 the restaurant has been famous for two things – its excellent range of pancakes and for offering 24 hour service. You can have pancakes any time of the day or night that the craving might strike you at Charlotte Street in Brisbane’s CBD. It is worthwhile visiting the restaurant simply to see the beautiful heritage listed building that is its home. Formerly St. Luke’s Anglican Church, the building was constructed in 1904. From this time until St. John’s Cathedral was ready in Fortitude Valley, it was home to Brisbane’s largest Anglican congregation.

In 1910, the cathedral was complete and St. Luke’s became the headquarters for the Anglican Church of England’s Mission and remained so until the 1950s. The building is a stunning example of the Romanesque style and the interior is dominated by a huge archway and complex roof gables. Today the basement area is a bar known as the Good Knight Bar, but in the past it was a meeting place provided by the church for several community groups such as the Anzac Club, Newspaper Boys Club and the Overseas Girls Club.
Image by robstephaustralia on Flickr under Creative Commons License.
5

When you enter the main entrance you are greeted by a Minton tile European imported foyer and grand staircase, which leads up to the Chambers and the Reading Room. In the Red Chamber, which was the Upper House until it was abolished in 1922, you find Waterford crystal chandeliers, which were presented to the parliament by Queen Victoria. Stained glass in both the Green and Red Chambers depict the monarch. On a Parliament House tour you can view the mace, which is a stunning gold and silver creation one meter long and weighing 7.7 kilograms. It features many Queensland opals and sapphires and is placed in the Green Chamber when the Parliament is in session. There are guided tours held every Saturday and Sunday between 10am and 2pm.
Image by James Cridland on Flickr under Creative Commons License.
6

The Plough Inn may look like an ordinary pub, but it has its own unique ghostly stories. The owners of the inn believe that the building is haunted by the ghost of a little girl who was killed there in the 1920s. She has never been seen either as a figure or shadow, but her chilling voice is quite often heard here.
Image by Wombok on Flickr under Creative Commons License.