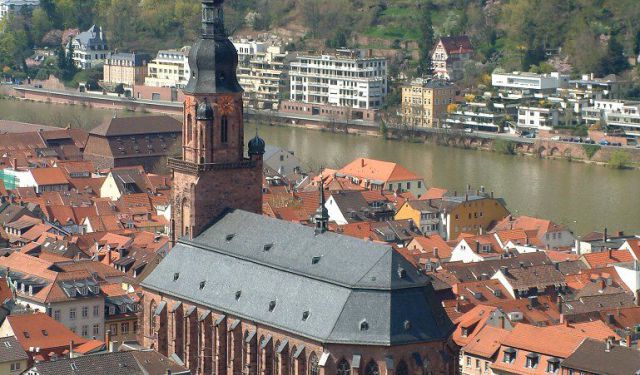 Image by Hans Lohninger on Wikimedia under Creative Commons License.

Germany has a rich history regarding religion, religious buildings and great architecture. Many significant Baroque innovations were born in Germany and this guide will lead you to some of its pearls of religious architecture. Heidelberg's houses of worship are a wonderful example of rare beauty.
How it works: Download the app "GPSmyCity: Walks in 1K+ Cities" from iTunes App Store or Google Play to your mobile phone or tablet. The app turns your mobile device into a personal tour guide and its built-in GPS navigation functions guide you from one tour stop to next. The app works offline, so no data plan is needed when traveling abroad.

1) Church of the Holy Spirit (must see)

The Church of the Holy Spirit stands in the middle of the market place in the old center of Heidelberg not far from the Heidelberg Castle. The steeple of the church, rising above the roofs, dominates the township. Documents name Arnold Rype, who was also mayor of Heidelberg for a time, as the master builder. In the usage of the time, the term "master builder" referred not to the architect but the financial coordinator.

The only known architects of the Church of the Holy Spirit are Hans Marx, who worked on the church until 1426 as well as Jorg, who was responsible until 1439. Both men probably supervised work on the nave. The construction lasted for some one hundred and fifty years. The Choir was consecrated in 1411 and the nave was finished in 1441. Probably in the same year the construction of the steeple was started. The work was interrupted until 1508 and the tower was finished in 1544. In 1709, after the church had been set on fire by the French during the War of the Palatinian Succession, it was rebuilt and received a baroque spire.

2) Church of the Jesuits

Construction of the Church of the Jesuits began in 1712. From 1866 to 1872, a bell tower made of red brick was added. The church was designed in the early Baroque style, with some Romanesque influences. Connected to the church is the Museum of Ecclesiastical Arts.

Image by José Luiz on Wikimedia under Creative Commons License.
3

St. Peter's Church, Heidelberg’s oldest church, was built by early Christians in the beginning of the 12th century. This unique church has orange walls and a red roof, arched windows sculpted in finely detailed bas-relief and a bell tower. It is a great example of early Baroque architecture, with Romanesque and even some oriental influences.
Image by BishkekRocks on Wikimedia under Creative Commons License.
4

This Protestant Evangelical church was built between 1659 and 1661. Its name means “God will ensure.” Destroyed in 1693 during the war, it was rebuilt in 1700. The north tower was added in 1717 and in the late 1800s, the interior was redecorated in a Neo-Renaissance style. The church contains Heidelberg’s oldest organ, which was made by Matthias Burkard.
Image by Georg Buzin on Wikimedia under Creative Commons License.
5

5) Church of the Redeemer

Church of the Redeemer, a former Dominican Convent chapel, was built in 1724. Heidelberg’s English-speaking community has used it for worship since 1900. Since 1971 it has shared its space with an Anglican congregation. Its inside walls are lined with unique murals.
Image by Luftschiffhafen on Wikimedia under Creative Commons License.
6

Saint Anna-Kirche, a red brick church built in the middle of the 19th century, has wide arcade windows, an unusual feature in Baroque architecture, but the portal and bas-relief columns meet the traditions of this style. Its interior walls are white with gold and dark wood elements.
Image by Luftschiffhafen on Wikimedia under Creative Commons License.
7

Jüdische Kulturgemeinde is a 20th century synagogue with modern architecture, featuring a white stone façade, large square windows and a rounded tower. Its furniture is made of dark wood and it displays traditional paintings.
Image by Adiel lo on Wikimedia under Creative Commons License.
8

St. Boniface, a Catholic church built between 1899 and 1903, was designed by Ludwig Maier. It is a purely Neo-Romanesque architecture, with a transept inside and twin towers out front. By 1925 the congregation had grown to over 8,000 members and in 1976 its interior was renovated. The contrast of light limestone and red sandstone form its unique color palette.
Image by Rudolf Stricker on Wikimedia under Creative Commons License.
9

The architecture of Christ Church is a mixture of Renaissance and Gothic design, corresponding to the traditional mix of these styles. A special feature is its four clocks, which recall the stages of the Reformation. The associated cities are included above each clock, which are Wittenberg, Worms, Speyer and Augsburg.
Image by 3268zauber on Wikimedia under Creative Commons License.