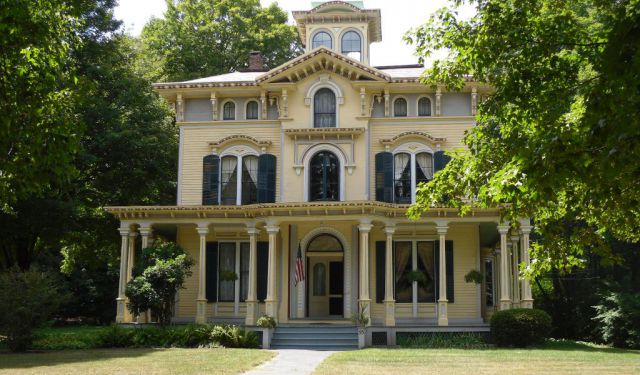 Image by dougtone on Flickr under Creative Commons License.

Historic Houses in Hartford Self Guided Tour (Self Guided), Hartford

Hartford is a place where visitors have to explore almost all the streets to see all the historic buildings of the city. Most of them are registered in the U.S. National Register of Historic Places. Take this self-guided tour to admire the most important historic houses in Hartford.
How it works: Download the app "GPSmyCity: Walks in 1K+ Cities" from iTunes App Store or Google Play to your mobile phone or tablet. The app turns your mobile device into a personal tour guide and its built-in GPS navigation functions guide you from one tour stop to next. The app works offline, so no data plan is needed when traveling abroad.

The Connecticut State Capitol houses the Connecticut General Assembly; the upper house, the State Senate, and lower house, the House of Representatives, as well as the office of the Governor. The Connecticut Supreme Court sits across Capitol Avenue in a different building. The building is one of the largest Eastlake Style buildings. The exterior is East Canaan, Connecticut marble and granite from Westerly, Rhode Island.

The building is roughly rectangular, the interior spaces organized around two open interior courts that run vertically to large skylights. In the center is a third circular open rotunda beneath the dome. The large hall of the House of Representatives forms an extension on the south side. There are high relief scenes from the state's history in the 16 tympana above the doors, (except for the carving above the main north door, which is of the state seal). The typanum of the main east door, "The Charter Oak" by Charles Salewski, was the first piece of sculpture created for the Capitol. The State Capitol was designated as a National Historic Landmark in 1971.

Image by jglazer75 on Wikimedia under Creative Commons License.
Sight description based on wikipedia
2

Connecticut’s State Library and Supreme Court Building includes the Library, State Archives, and Museum of Connecticut History. The groundbreaking ceremony for the premises was held on July 29, 1908. Architects Donn Barber of New York and E. T. Hapgood of Hartford envisioned a design based on an adaptation of the Italian Renaissance style of architecture. The design includes three wings off a central lobby, the State Library on the left, Memorial Hall in the center and the Supreme Court on the right.

Construction began on October 23, 1908 with Marc Eidlitz & Son of New York as the builder and general contractor. On November 28, 1910, State Librarian George Godard and his staff moved into the new building. An addition to the East Wing in 1969 was designed by Architects Jeter & Cook. The addition featured Museum exhibition space, an extensive stack area, and administrative office space.

Image by Mr. T in DC on Flickr under Creative Commons License.
Sight description based on wikipedia
3

The Building at 136-138 Collins Street was established in 1870 and is considered a national and historic site of Hartford since 1982. The house represents Second Empire architectural style. The so-called French elements like the mansard roof with large windows decorate the structure. The windows are decorated by detailed motifs. The exterior of the house is mostly a display of wood. The house is located not far from the Mutual Life Insurance Company.
Image by Sage Ross on Wikimedia under Creative Commons License.
4

The Building at 142 Collins Street was established in 1979. It was enlisted in the U.S. National Register of Historic Places of Hartford in 1979. The old house represents Queen Anne architectural style, also called English Baroque style. The structure is easily recognizable because of the asymmetrical front walls, the overhanging eaves, the balconies from the second floor, the brick stone chimney and the wooden roof. The beautiful combination of blue and reddish on the façade makes the house more original.
Image by Sage Ross on Wikimedia under Creative Commons License.
5

The William L. Linke House was established in 1880. The beautiful house is a special exemplar of American Queen Anne architectural style. This construction is distinctive because of its original mansard wooden roof. There are three brick stone chimneys. Brick stone is the predominant material used for the façade. Thanks to the numerous windows, there are several light rooms inside the house. At the entrance there is a small roof hanging on green wooden columns.
Image by Sage Ross on Wikimedia under Creative Commons License.
6

The Harriet Beecher Stowe House is a historic house in Hartford, that was once the home of Harriet Beecher Stowe, author of Uncle Tom's Cabin. Stowe lived in this house for the last 23 years of her life. The 5,000 sq ft (460 square meters) cottage-style house is located next door to the Mark Twain House. The house is part of the Harriet Beecher Stowe Center which preserves the house and center's collections. The research library includes letters and documents from the family. The house includes original items from the family. In addition to the Stowe House, the historic site includes a 1873 carriage house (the visitor's center) and the Katharine Seymour Day House (1884). The center offers tours of the house.

The Perkins-Clark House is a Gothic Revival villa, established in 1861. It is located on Woodland Street next to the Connecticut State University System. It was designed by Octavius Jordan who also created other famous buildings in the neighborhood. In 1924 the Perkins-Clark House was purchased by Probate Judge Walter Clark. Later, in 1978 it was enlisted in the U.S. National Register of Historic Places.
Image by Sage Ross on Wikimedia under Creative Commons License.
8

The building at 1430 Asylum Avenue resembles ordinary American buildings. The structure is comparable to George Washington’s Mount Vernon; there are several things that make the first one more impressive. The wooden railing alongside the roof is present on the front façade of the building. The white house has numerous large windows on the first and second floors. On the roof there is a small tower and two chimneys.
Image by Mira Hartford on Flickr under Creative Commons License.
9

A. Everett Austin House was the home of Wadsworth Atheneum director Arthur Everett Austin, Jr. Chick Austin built the house in 1930 after seeing the Palladian Villas of the Veneto on his honeymoon. It was declared a National Historic Landmark in 1994.

The house, only one room deep, is long and narrow, 86 feet in length by 18 feet in depth. In the front elevation, the central three-bay pedimented pavilion is flanked by four-bay wings. The bays are defined by shallow, two-story Ionic pilasters. The walls of the pavilion and wings are in the same plane, since the pavilion does not project. The planar effect is emphasized by the wall sheathing, which is flush boarding, tongue-in-groove. The twelve flat pilasters rise with entasis from bases of double torus moldings to stylized Ionic capitals. Two string courses, one at first-floor ceiling height, the other below second-floor window sills, establish a horizontal orientation to balance the strong upward thrust of the pilasters. After Austin's departure from Hartford in 1946, Helen Goodwin Austin remained in residence. In 1985, she and her two children, David and Sarah Austin, donated the house to the Wadsworth Atheneum.

Hartford’s museums are pleasantly surprising because of the local history and culture. The uniqueness of this tour is due to the original buildings and unusual exhibits that can be seen there and nowhere else. Take this tour to visit some of the most remarkable museums and art galleries in Hartford.