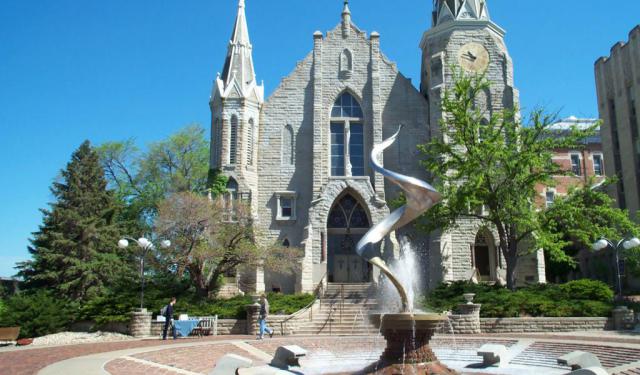 Image by azv44211 on Flickr under Creative Commons License.

Omaha is known as one of the cities with the most impressive and interesting churches, which are situated in downtown Omaha. The religious sites will help you to understand the city’s architecture, its religious history and even the way in which parishes were built. Take this tour to discover Omaha’s most significant religious sites.
How it works: Download the app "GPSmyCity: Walks in 1K+ Cities" from iTunes App Store or Google Play to your mobile phone or tablet. The app turns your mobile device into a personal tour guide and its built-in GPS navigation functions guide you from one tour stop to next. The app works offline, so no data plan is needed when traveling abroad.

The building was designated an Omaha landmark in 1985, and listed on the National Register of Historic Places in 1986. According to the City of Omaha, Holy Family is the oldest remaining brick church structure in the city.

St. John's Church, located on the campus of Creighton University, was built in English Gothic style. It was designed by a local architect - P.J. Creedon. This local university was named in honor of the Creighton family, who donated jewelry worth a fortune for the church’s construction. The building’s dimensions, without transept and apse, are 184 feet long and 138 feet wide. The construction, which lasted forty years (1887-1927), was built by the largest construction crew at the time - 4000 people.
Image by bibliofuture on Flickr under Creative Commons License.
3

Trinity Cathedral is located at 113 N. 18th Street. Nebraska's first Episcopal parish, Trinity was established in 1856, and became the state's first Episcopal cathedral in 1872. Designed by noted English architect Henry G. Harrison in 1880, the Cathedral was consecrated on November 15, 1883. It was added to the National Register of Historic Places in 1974.

Built in the late Late Gothic Revival style with rock-faced masonry walls and stone tracery over more than 43 stained glass lancet windows. The church is almost entirely of bluestone from Illinois in a design that is nearly cruciform with an entry tower extending outward. The exterior of the building has more than six stone crosses at varying points of its roof line. The interior features Gothic design throughout, including aisles, nave, transept, choir, and a clerestory. The church includes a noted carved oak bishop's throne and dean's stall.

St. Mary Magdalene, situated in downtown Omaha, was founded in 1868. At the beginning it was a small church. Afterwards, in 1903, the present church was built. This church was very popular and well-known because it was built “downwards”. Because of Omaha’s steep hills, (in 1919 Dodge Street was lowered), the new street level was at the mezzanine of the church. As a result, it was necessary to construct a new substructure. Here the masses last approximately thirty minutes.
Image by Bill Davies (SA) on Flickr under Creative Commons License.
5

The current building was opened in 1913, and the church continued to grow, adding neighborhood Sunday Schools across Omaha. Many of these "Sunday Schools" were later developed into congregations. In 1916 the church claimed to be the largest Lutheran congregation in the world, withover 2,000 members. The General Synod of the Evangelical Lutheran Church in the United States was held at the Church in 1887. In 1940 Kountze hosted the annual convention of the United Lutheran Church of America. Extensive remodeling and repair work coincided with the 100th anniversary of the building in 2006. Kountze celebrates its 150th anniversary as a congregation in 2008.
Image by Erika_Herzog on Flickr under Creative Commons License.
Sight description based on wikipedia
6

St. John the Baptist Greek Orthodox Church is one of few beautiful Orthodox churches situated in Omaha. After the arrival of many Greek workers in Omaha in 1907, an Orthodox church was needed. In 1908 a small church was constructed, which is today a Ukrainian Catholic parish. An interesting fact is that the church was officially accepted by Orthodox churches only in 1927. The present building was also constructed in 1908 in Byzantine style as The Temple Israel. In 1951 the church bought this edifice that later became the new St. John the Baptist Greek Orthodox Church. The interior is decorated with royal colors that create a peaceful and cozy atmosphere.
Image by icxcpainter on Flickr under Creative Commons License.
7

St Peters Church is located on the outskirts of downtown Omaha and was built in 1926. Next to it, there is an older church that was meant to be Omaha's cathedral. Today, the old building is used as the church's school. Its facade is made in Greco-Roman style, and its "no-pillar”, five-aisled nave represents the uniqueness of the 19th century. Its altar is made of Carrara marble that was brought from Italy and the cathedral's picturesque stained-glass windows were brought directly from Bavaria. Masses are held in Latin, Spanish, English and even Vietnamese.
Image by ˙·▪•● Peyman ●•▪·˙ on Flickr under Creative Commons License.
8

In August, 2007, Archbishop Elden Curtiss entrusted the care of the parish to the Priestly Fraternity of St. Peter to provide the Mass and Sacraments in the Traditional Rites of the Catholic Church to any who so desire them. The first Traditional Latin Mass in over 40 years was offered on Sunday, August 26, 2007. A personal parish dedicated to the Traditional Latin Mass is encouraged by Pope Benedict XVI in his 2007 Motu Proprio Summorum Pontificum on the Latin Mass.
Image by Ammodramus on Wikimedia under Creative Commons License.
Sight description based on wikipedia