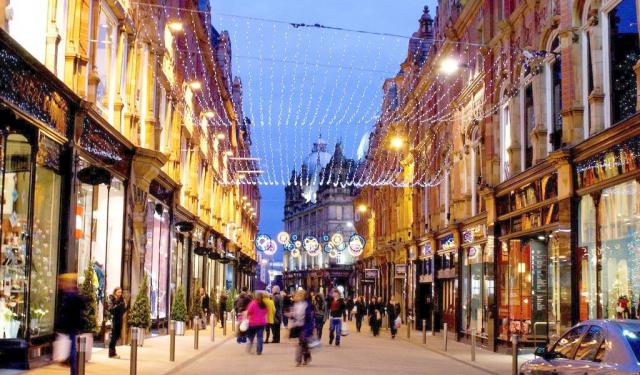 Leeds is a shopaholic’s paradise, home to big name brands and small independents housed in some of the city’s most iconic buildings. ***PH*** If you are looking for some special gifts and souvenirs, jewelry or accessories, the city's shopping spots are all here to serve your needs. The following walking tour will help you find the most exciting shopping venues.
Image Courtesy of Wikimedia and Andrew roberts uk.
How it works: Download the app "GPSmyCity: Walks in 1K+ Cities" from iTunes App Store or Google Play to your mobile phone or tablet. The app turns your mobile device into a personal tour guide and its built-in GPS navigation functions guide you from one tour stop to next. The app works offline, so no data plan is needed when traveling abroad.

The Corn Exchange was designed by Cuthbert Brodrick, the architect from Hull, who also designed the Leeds Town hall, the Leeds City museum, the Headingley Congregational Church and many other buildings in Leeds. His inspiration for the circular, round-topped exchange was the Bourse de commerce of Paris by Francois-Joseph Belanger.

The exchange was completed in 1864. The building ceased to be an exchange in time. In the 1980s it was acquired by Specialty Shops plc. It was renovated and restored and converted to retail businesses.

The Exchange building houses about 30 independent retailers and food outlet shops. It is built on an oval plan with millstone grit and it has a grey slate dome with molded bands. There is a frieze, a dentilled cornice and a parapet with a clock. There are three arcade porches with Tuscan columns and two floors of arched windows.

Image Courtesy of Wikimedia and Jungpionier.
2

Here is the big market to end all big markets. The Kirkgate Market on Vicar Lane and George Street is the largest covered market in all of Europe. It has about 170 traders selling a huge variety of goods and foods. There are exotic fruits and vegetables, a fish market and a meat sector, and bakeries. Flowers, clothing, and novelties can also be found here.

There is a Chinese supermarket, a Polish deli. Shawarmas, chapattis, crepes and real Yorkshire pudding can be had. There is a South Asian bazaar on Wednesdays with a range of South Asian foods, silk saris and Indian bracelets. The events space holds festivals, concerts and fashion shows. Some 800 stalls serve 100,000 customers a week.

The 1904 Hall is ornate. It has a glass roof and a balcony. It is a cast-iron structure decorated in a Flemish Art Nouveau style. The 1904 hall is the only part of the market to escape the ravages of the disastrous 1975 fire.

The 1976 Hall is a large open-plan hall with a latticed roof. The Outdoor Market is accessed from the 1976 and 1981 halls. There are three blocks of stalls including greengrocers, computers, clothing and electrical goods.

Victoria Leeds Shopping Arcades consist of 80 stores and services over more than 1.1 million square feet. It is made up of the 2016 Victoria Gate development and the Victoria Quarter. The area includes a casino and three anchor stores. Along with shopping, Victoria Leeds is known for having the largest work of stained glass in Europe.

County Arcade and Cross Arcade were created from a design by theatre architect Frank Matcham in 1904. They fell into disrepair over the years, but were restored in 1996 by Derek Latham & Co. The stained glass canopy was designed by artist Brian Clarke. It was the largest public artwork in Britain when it was installed. It is made of mouthblown glass that is traditionally leaded and enamelled.

Victoria Leeds is Grade II listed. It was awarded the Leeds Award for Architecture and the Civic Trust Award in 1991. The shopping centre is open from 10 AM to 6 PM on weekdays, from 9 AM to 6 PM on Saturday and from 11 AM to 5 PM on Sunday.
Image Courtesy of Flickr and traveljunction.
4

Queen's Arcade is a boutique shopping center that is located in a pedestrianized area that is in the center of the city. It is a Victorian-style shopping arcade that was built in 1889. It is designated as Grade II listed.

Many of the boutiques at Queen's Arcade have been in place for more than three decades. Some of these include Accent, Levi Strauss, The North Face and Arkade Barbers. Queen's Arcade also has buy, sell and exchange spaces such as Designer Exchange and the Handbag Clinic.

Businesses other than shopping boutiques in Queen's Arcade include Cancer Research UK, Karma Arts Tattoo, Silver Lining Piercing and Picture the Print Printing & Embroidery. Those wanting to have a bite can stop by restaurants that offer pizza and baked goods.

The stores of Queen's Arcade open Monday through Saturday from 9 AM to 5 PM and Sunday from 11 AM to 4 PM.
Image Courtesy of Flickr and Tim Green.
5

Thornton's Arcade is the oldest covered shopping street in Leeds. It was the brainchild of Charles Thornton, owner of the Varieties Music Hall. He built the arcade in 1878 on the site of the demolished Old Talbot Inn, which dated to 1715.

Thornton's Arcade is three levels with a glass roof. The clock at the northern end of Thornton's Arcade was made by William Potts and Sons. It features four life-size figures of characters from Ivanhoe who strike the hours and the quarters. These figures were created by sculptor John Wormald Appleyard.

Entrances to Thornton's Arcade are on Lands Lane and Briggate. A prominent shop in Thornton's Arcade is OK Comics. It hosts regular events, competitions, signings and parties. Patrons will also find a coffee shop, salon, clothing stores, a bakery and a tattoo parlor.

The arcade also hosts an occasional night market that brings in local vendors who set up booths on the street in the evenings.
Image Courtesy of Flickr and Visit Leeds.
6

The Grand Arcade is a shopping arcade on New Briggate. It was built by New Briggate Arcade Ltd. in 1897. Architects Smith & Tweedal designs the arcade using a Renaissance architectural style and a Modern, British Art Nouveau style.

The arcade was originally two parallel arcades between New Briggate and Vicar Lane. One of these arcades was converted into Tower Cinema in 1920.

The Grand Arcade offers unique boutiques that feature home goods, clothing and handmade items. There are a number of spaces that offer food, afternoon tea or coffee.

The Potts Clock at one end of the arcade was designed by Potts of Leeds. It features knights that strike the hour on their anvils and three revolving figures that bow during each hour. Beneath the clock is a quote stating, "Time waits for no man."

The Grand Arcade is a Grade II listed building.
Image Courtesy of Wikimedia and Chemical Engineer.

The old Brythonic word "Ladenses" meant "folks of the rapid river." The river was the River Aire that flows through the City of Leeds today. In the 5th century the once forested area of Leeds was part of the Brythonic kingdom of Elmet. The Venerable Bede called it "Loidis." In Welsh it was "lloed", "a place." At any rate, "Leeds."

Leeds is a city with a rich heritage and history. The city has numerous important statues and monuments, some of which are hundreds of years old but still in remarkable condition. Take this self-guided walking tour to discover the most significant and attractive statues and sculptures of the city.