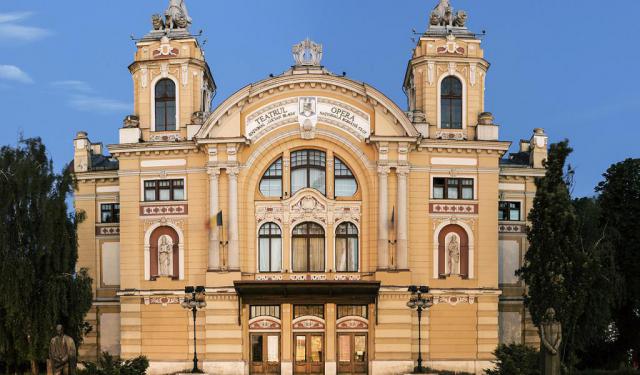 Image by ZARAKA Z on Wikimedia under Creative Commons License.

Unusual and magnificent historic buildings are some of the greatest attributes of Cluj-Napoca. Renaissance, Baroque and Gothic styles are particularly prevalent among the structures. Take this self guided walking tour to admire Cluj-Napoca’s most important historic buildings.
How it works: Download the app "GPSmyCity: Walks in 1K+ Cities" from iTunes App Store or Google Play to your mobile phone or tablet. The app turns your mobile device into a personal tour guide and its built-in GPS navigation functions guide you from one tour stop to next. The app works offline, so no data plan is needed when traveling abroad.

The Cluj-Napoca Tailors' Tower is located at the southeast corner of the old Cluj-Napoca citadel. It was built in the 15th century and rebuilt between 1627 and 1629, taking its present form. It was named after the Tailors' Guild, who took care of and guarded this part of the city. Near the tower — where Baba Novac, general of Michael the Brave and Saski priest, was killed in 1601 by General Basta — there is a statue of Baba Novac. Deserted until 2007, the municipality of Cluj-Napoca undertook to include the tower in the city's touristic itinerary, financing its restoration. The tower will become a Centre for Urban Culture, based on a project offered by the Transylvanian Branch of the Architects’ Chamber of Romania in collaboration with BAU (Birou de Arhitectura si Urbanism). The Centre will host an exhibition space on the ground floor, as well as a library and a conference room on the upper floors.
Image by Cluj Napoca on Wikimedia under Creative Commons License.
Sight description based on wikipedia
2

The Lucian Blaga National Theatre is one of the most prestigious theatrical institutions in Romania. The theatre shares the same building with the Romanian Opera. The theatre was built between 1904 and 1906 by famous Austrian architects Ferdinand Fellner and Hermann Helmer, who designed several theatres and palaces across Europe in the late 19th century and early 20th century, including the theatres in Iaşi, Oradea, Timişoara and Chernivtsi (Romanian: Cernăuţi). The project was financed entirely with private funds. The hall initially had a capacity of 928 places, being conceived in the Neo-Baroque style, with some inflections inspired by the Secessionism in the decoration of the foyer. Between 1950 and 1956 the stage house was extended to 1200 seats.
Image by ES Vic on Wikimedia under Creative Commons License.
Sight description based on wikipedia
3

The Mauksch–Hintz House is a historic building in Clug-Napoca's main square; it housed the first pharmacy in the city. The classicist façade dates back to the 1820s. However, the ground-floor and the basement were built in the Renaissance era. A fresco from 1752 in the former office tells about the history of the pharmacy in the Hungarian language. Cluj's first pharmacy was opened in the building in Main Square (today Piaţa Unirii) in 1573 and was operated by the government. In 1727 it was sold to its first private owner, Alexander Schwartz, and then to Tobias Mauksch in 1752. In 1851 it was inherited by the (Transylvanian Saxon) Hintz family and was renamed "Saint George's Pharmacy" (La Sfântul Gheorghe). After the establishment of Communist Romania, the entire building was nationalized and the pharmacy was closed. The descendants of the once-wealthy Hintz family migrated to West Germany in the 1970s.
Image by Cluj Kolozsvár Klausenburg on Flickr under Creative Commons License.
Sight description based on wikipedia
4

Image by Roamata on Wikimedia under Creative Commons License.
Sight description based on wikipedia
5

The Matthias Corvinus House (Romanian: Casa Matei) is one of the oldest buildings in Cluj-Napoca, Transylvania. It was built in the 15th century as a small guesthouse. During its history, the house served as a jail, hospital, and museum; it is now home to a visual arts institute. Matthias Corvinus, son of John Hunyadi the legendary Transylvanian warrior, Voivode of Transylvania, later one of the most renowned kings of Hungary, was born in this building.
Image by Istvánka on Wikimedia under Creative Commons License.
Sight description based on wikipedia