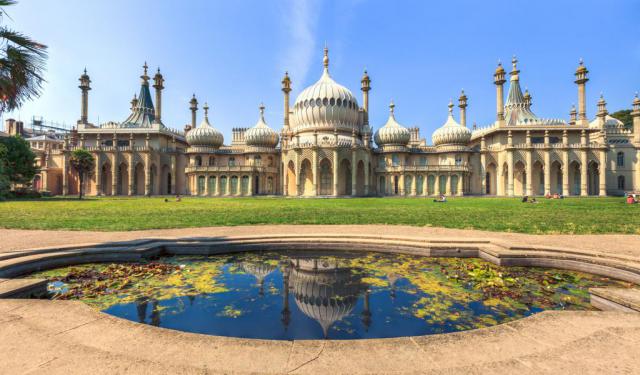 Image by Fenliokao on Wikimedia under Creative Commons License.

Brighton is home to a huge number of beautiful churches and old religious buildings. Some churches date back to the 18th century and are beautiful buildings of architectural, historical, cultural and religious value. This walking tour will take you to the most important religious sites in Brighton.
How it works: Download the app "GPSmyCity: Walks in 1K+ Cities" from iTunes App Store or Google Play to your mobile phone or tablet. The app turns your mobile device into a personal tour guide and its built-in GPS navigation functions guide you from one tour stop to next. The app works offline, so no data plan is needed when traveling abroad.

In December 2007, after a long period of consultation, the Diocesan Pastoral Committee recommended to the Church Commissioners that St Peter's should be made redundant. On 8 May 2009, Holy Trinity Brompton Church in London, an influential Church of England parish church which created the Alpha course, agreed to take over its ownership and running. The parish of St Peter, previously merged with that of the Chapel Royal, will be reconstituted as a separate, smaller parish. Services restarted on Sunday 1 November 2009. The Vicar is Archie Coates and the Curate is Jonny Gumbel, son of Nicky Gumbel who developed the Alpha Course.

St Peter's is the proud owner of a large and fine pipe organ built in 1888 for the Hampstead Conservatoire of Music by Henry Willis and brought to Brighton in 1910.

Image by Hassocks5489 on Wikimedia under Creative Commons License.
Sight description based on wikipedia
2

The building at 155–158 North Street in Brighton was built between 1921 and 1923 as a branch of National Provincial Bank. The King Louis-style bank was built on the site of several shops (with offices above). The properties were acquired by the National Provincial Bank during 1916–20. The Brighton Gazette had occupied 155a North Street since 1910, when its long-time home at number 150 was converted into the Cinema de Luxe. In 2011 it became J D Wetherspoon's second pub in central Brighton.

The "good attention to detail" shown throughout the building's Louis XIV-style façade has been praised. English Heritage has listed it at Grade II for its architectural and historical importance.

Image by Hassocks5489 on Wikimedia under Creative Commons License.
Sight description based on wikipedia
3

The Theatre Royal is a theatre in Brighton, presenting a range of West End and touring musicals and plays, along with performances of opera and ballet and a Christmas pantomime. In 1806, the Prince of Wales gave Royal Assent for the theatre to be built and it opened on June 27, 1807, with a performance of William Shakespeare's Hamlet. Since 1999, the theatre has been owned by the Ambassador Theatre Group. In 2007, the theatre celebrated its 200th anniversary with a visit from Queen Elizabeth II who renamed a box after herself.
Image by Oxfordian Kissuth on Wikimedia under Creative Commons License.
Sight description based on wikipedia
4

The original chapel was a stuccoed building in a broadly Classical style, with rounded sash windows and a pediment with the Prince's coat of arms. A row of Doric columns flanked the entrance. Inside there were galleries on each wall, supported by decorated columns. The gallery above the altar contained the organ, and there was a tall, highly decorated pulpit. The alterations of 1876–1877 removed the gallery above the altar and added a chancel, separated from the nave by an iron rood screen, new pulpit and lectern. The main weekly service at the Chapel Royal is held on Sundays at 11:00am. Other services are held on Saturdays, Tuesdays and Thursdays. There has been a long musical tradition at the chapel; concerts have been held right from the beginning, and continue to be a regular feature, usually on Tuesdays.
Image by Bin im Garten on Wikimedia under Creative Commons License.
Sight description based on wikipedia
5

The Royal Pavilion is a former royal residence located in Brighton. It was built in three campaigns, beginning in 1787, as a seaside retreat for George, Prince of Wales, from 1811 Prince Regent. It is often referred to as the Brighton Pavilion. It is built in the Indo-Saracenic style prevalent in India for most of the 19th century, with the most extravagant chinoiserie interiors ever executed in the British Isles. The palace looks rather striking in the middle of Brighton, having a very Indian appearance on the outside. However, the fanciful interior design, primarily by Frederick Crace and the little-known decorative painter Robert Jones, is heavily influenced by both Chinese and Indian fashion (with Mughal and Islamic architectural elements). It is a prime example of the exoticism that was an alternative to more classicizing the mainstream taste in the Regency style.
Image by Jim Linwood on Flickr under Creative Commons License.
Sight description based on wikipedia
6

Marlborough House is a mansion in Brighton on the south coast of England. It is a Grade I listed building. Located at 54 Old Steine, it was built as a red brick building circa 1765 for Samuel Shergold, a local hotelier. After being sold on by both Shergold and its second owner, the Duke of Marlborough, in 1786 it was bought by William Gerard Hamilton and altered to a Georgian design by Robert Adam. For many years it was owned by Brighton and Hove Council. It is currently undergoing major renovations.
Image by Hassocks5489 on Wikimedia under Creative Commons License.
Sight description based on wikipedia
7

The original St Mary the Virgin Church was one of four chapels built in the 1820s. Barnard Gregory had obtained an Act in 1825 to allow him to build St Margaret's Church in Cannon Place in central Brighton. In 1873, St Mary the Virgin became a parish church for the first time when Brighton's parishes and ecclesiastical districts were reorganized. St Mary the Virgin's parish was extended in 1948 when the nearby St James's Church closed, and when it was demolished in 1975 some memorials and fixtures were moved.
Image by Antiquary on Wikimedia under Creative Commons License.
Sight description based on wikipedia
8

Royal Crescent is a crescent-shaped terrace of houses on the seafront in Brighton. Built in the late 18th and early 19th century as a speculative development on cliffs east of Brighton by a wealthy merchant, the 14 lodging houses formed the town's eastern boundary until about 1820.

It was the seaside resort's first planned architectural composition, and the first built intentionally to face the sea. The variety of building materials used include black glazed mathematical tiles—a characteristic feature of Brighton's 18th-century architecture. The crescent of 14 houses was the first to be built facing the sea and to be designed in harmony with it. Brighton's 18th-century development had been haphazard and unplanned, and Royal Crescent also represented the first unified architectural design, planned as a set-piece and overseen from start to finish by one man. The grand scale was intended to attract middle- and upper-class residents, both permanent and seasonal, and it was immediately successful: early tenants included the Rice family, a brewing dynasty from London.
Image by Hassocks5489 on Wikimedia under Creative Commons License.
Sight description based on wikipedia