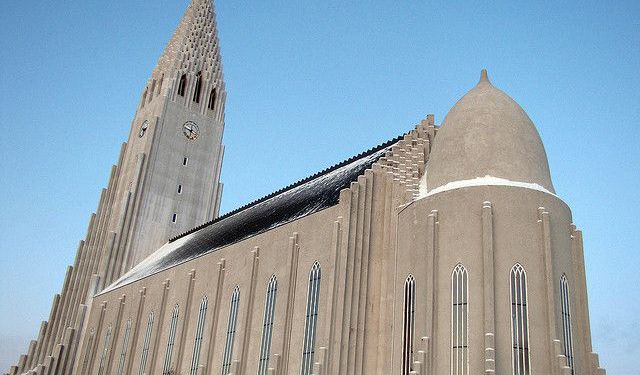 Image by o palsson on Flickr under Creative Commons License.

Icelandic churches are unique, and much of the best architecture of Reykjavik can be found at its religious sites. Most churches in Reykjavik do not intrude on the picturesque and dramatic scenery surrounding them. The exception to this rule is Hallgrímskirkja, the most impressive church of the city. This self-guided tour will lead you to the religious sites of Reykjavik:
How it works: Download the app "GPSmyCity: Walks in 1K+ Cities" from iTunes App Store or Google Play to your mobile phone or tablet. The app turns your mobile device into a personal tour guide and its built-in GPS navigation functions guide you from one tour stop to next. The app works offline, so no data plan is needed when traveling abroad.

Landakotskirkja ("Landakot's Church") is the cathedral of the Catholic Church in Iceland. It is located in the western part of Reykjavík, on the Landakot property. It has a distinctively flat top, as opposed to the standard spire. Its architect is Guðjón Samúelsson, who also built the famous Hallgrímskirkja and the Akureyrarkirkja in Akureyri.

The first Catholic priests to arrive in Iceland after the Reformation were the Frenchmen Bernard Bernard and Jean-Baptiste Baudoin. They bought the Landakot farmstead in Reykjavík and settled there in the early 19th century. They built a small chapel in 1864. A few years later, a small wooden church was erected by Túngata, close to Landakot. After the First World War, Icelandic Catholics saw the need to build a bigger church for the growing number of Catholics. They decided to build a Neo-Gothic church and entrusted the task to the architect Guðjón Samúelsson. After years of construction, Landakotskirkja was finally sanctified on the 23rd of July 1929. It was the largest church in Iceland at the time. Today, Landakotskirkja is a distinct landmark in western Reykjavík. The only Catholic school in Iceland, Landakotsskóli, is located nearby on the same land.

Image by Christian Bickel fingalo on Wikimedia under Creative Commons License.
Sight description based on wikipedia
2

The Reykjavík Cathedral (Icelandic: Dómkirkjan í Reykjavík) is the seat of the Bishop of Iceland and mother church of the Evangelical Lutheran Church of Iceland, as well as the parish church of the old city centre and environs.

It was in this Cathedral that Icelandic independence was first officially endorsed by the Lutheran Church of Iceland. Since 1845, members and cabinet ministers of every Alþing parliament (right next door) have gathered here for a service before the annual session. It was also in this church that Iceland's national anthem (also a hymn) was first sung in 1874.

Why You Should Visit:
The nice thing about this church is that there aren't too many buildings close to it thereby allowing you a really good view and opportunity to appreciate it.

Tip:
If you are interested in going in, don't hesitate to try the door!
Open weekdays from 10am to 4pm and for ceremonies during weekends.


Image by Wolfgang Sauber on Wikimedia under Creative Commons License.
Sight description based on wikipedia
3

Fríkirkjan Church is a Free Lutheran church located in the center of Reykjavik on the shore of the picturesque Tjörnin Lake. There are always many seagulls and ducks on the water near the church. The church is characterized by a green roof. In general, the buildings in Reykjavik are of different, rather bright colors. The church was built in 1902 and is constructed of wood covered with metal, a prime example of the Icelandic vernacular tradition.
Image by Luc Van Braekel on Wikimedia under Creative Commons License.
Sight description based on wikipedia
4

4) Church of Hallgrímur (must see)

Hallgrímskirkja is often considered the most beautiful church in Reykjavik. Its architecture is amazing and is known around the world. It is a very tall structure set on a hill, and it is therefore seen from the far ends of Reykjavik. You can walk around the church to admire its sophisticated architecture. There are also an elevator or a set of stairs that you can take to the top to view the city and its magical skyline.

Tip:
Best to go in the morning if you're short on time, as there are often funerals in the afternoon and both the church & the tower close.

Opening Hours:
Daily: 9am–9pm, tower closes 8:30pm (May-Sep); 9am–5pm, tower closes 4:30pm (Oct-Apr)
The tower is closed on Sundays from 10:30am–12:15pm during mass at 11am
Image by Molechaser on Flickr under Creative Commons License.
Sight description based on wikipedia
5

Hateigskirkja is a local Reykjavik church, which is part of the state church. It has a very beautiful white color that makes it especially solemn during winter, when there is white snow around. It has two tall spires and two shorter spires. You can see beautiful religious pictures inside the church.
Image by vestman on Flickr under Creative Commons License.
6

Laugarneskirkja Church is a small, but picturesque church in Reykjavik. It was designed by the architect Gudjon Samuelsson, who helped create many splendid buildings in Reykjavik. The church dates back to 1949. It is especially beautiful at night, when it is illuminated.
Image by TommyBee on Wikimedia under Creative Commons License.