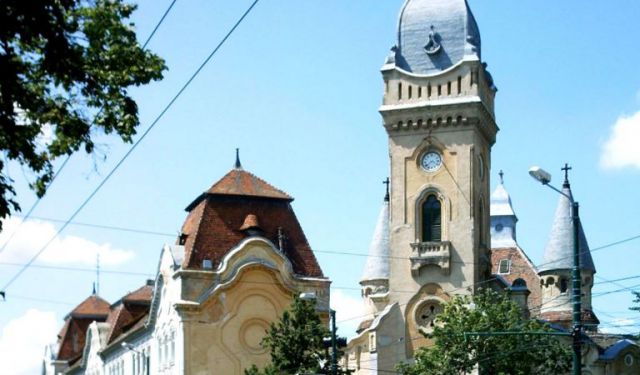 The city of Timisoara boasts an incredible number of religious venues that will even attract the attention of the most spoiled and dull creature on Earth. The main feature of the city’s worship places is the mix of uncommon architecture and varied history, which comes as an irreplaceable additional flavour to this walking tour.
How it works: Download the app "GPSmyCity: Walks in 1K+ Cities" from iTunes App Store or Google Play to your mobile phone or tablet. The app turns your mobile device into a personal tour guide and its built-in GPS navigation functions guide you from one tour stop to next. The app works offline, so no data plan is needed when traveling abroad.

The first Evangelic service, in the city of Timisoara, was held in 1795. In 1824, a new organization was inaugurated under the name – the United Protestant Community. In 1890, the Protestant Community divided into Evangelicals and Reformers. The Evangelical Lutheran Church in Timisoara is the only remaining church of the kind in the city. The tower was built in 1901, and in 1903, the 3 bells were mounted. One can visit the church from Tuesday until Friday, between 9 and 12 am.
Image by Wonderlane on Flickr under Creative Commons License.
2

The St. George's Cathedral, Timisoara or The Dome is located in Timisoara, Romania, at Piata Unirii, in the centre of town. The cathedral's foundation stone was put on 6th of August, 1736. It was designed by Joseph Emanuel Fischer von Erlach from Vienna, and then Hans Lechner continued working on the building as of 1750. In 1774, it was finished by two architects from Timisoara, Johann Theodor Kostka and Carl Alexander Steinlein. The Dome was built in Austrian Baroque style and it was dedicated to Saint George, the diocese's patron saint. The picture located at the high altar was painted by Michel Angelo Unterberger, director of the fine arts academy of Vienna, illustrating the patron saint. The side altars were painted by Johann Nepomuk Schöpf in 1772. The precious oil-lamps were made by Josef Moser. The organ was made by Leopold Wegenstein, and it provides an impressive experience for the ears. The cathedral's bells were renewed in Germany in 1998.
Image by Voytek S on Wikimedia under Creative Commons License.
Sight description based on wikipedia
3

The Serbian Orthodox Cathedral, dedicated to St. Nicholas, is situated in Piata Unirii in Timisoara. Next to this place of worship is located the Serbian Orthodox Vicariate, which finds itself in an amazing building decorated in the Baroque style, dating back to the 18th century. By the mid-nineteenth century, the religious edifice was used by the Orthodox community in the city, by both Serb and Romanian ethnicity, but after the separation of the two churches, the Serbian Church from Piata Unirii remained in the possession of the Serb community. Since 1964 the church is declared a historical monument.
Image by Voytek S on Wikimedia under Creative Commons License.
4

4) The Synagogue from the Fortress

The Synagogue from the Fortress was built between 1863 and 1865 and it is the only synagogue in Timisoara located in the central district of Citadel. The building was designed by the Viennese architect Ignatz Schuhmann, in the eclectic style, with features of Moorish style, a style that evokes old Spanish Jewish community in Timisoara. It has a capacity of about 3,000 people. The Synagogue was consecrated on the 19th of September, 1865 and served the Jewish community of Mosaic rite for almost 100 years.
Image by Martin Begrich on Wikimedia under Creative Commons License.
5

Known as the Misericordians Church, the current building of the Greek Catholic church, in Piata 700 dates back to 1851. But its history is older. St. John of Nepomuk Religious Association built a hospital between 1735 and 1737, which was subsequently taken over by the misericordian monks. In addition to the hospital, which at that time had only one floor in the Baroque style, the Roman Catholic Church was built between 1748 and 1753. The complex, which at the time sheltered the hospital, a pharmacy and a library, was destroyed during bombing in 1849, when the town was attacked by Hungarian revolutionaries. Rebuilt in 1851 and then dismantled in 1948, the church was taken over by the Greek Catholic Church.
Image by Székely Attila on Flickr under Creative Commons License.
6

The Parish Church “St. Catherine of Alexandria”, known as the Castle Church Timisoara has a long and interesting history. In the crypt of this medieval church was buried, in the 13th century, King Charles Robert of Anjou's wife, Mary Catherine. The church was owned by Franciscan monks, reformers of the Sanctissimi Salvatoris Province. This old church was demolished after 1723, at which point the monks moved downtown, the current Bolyai street. The new church of St. Catherine was built in a pure Baroque style containing many worship objects from the old church of Palanca Mare. Between 1887 and 1889, the church was modified and rebuilt mostly from scratch, though this time it was adapted to the Neoclassical style, while retaining many elements of Baroque. Nowadays in this church, services are held in German, Romanian, Slovak and Hungarian. Slovak believers celebrate the Holy Mass here every Sunday.
Image by Klearchos Kapoutsis on Flickr under Creative Commons License.
7

7) The Timisoara Orthodox Cathedral (must see)

The Timisoara Orthodox Cathedral is a Romanian Orthodox cathedral in Timisoara, Romania. It was built between 1937 and 1940. It is dedicated to the Three Holy Hierarchs, Saints Basil the Great, Gregory the Theologian and John Chrysostom. It has 11 towers, of which the central and the highest are 96 meters high. It is home to many valuable religious objects such as old icons and early writings in Romanian, such as the 1648 Noul Testament de la Bălgrad and the 1643 Cazania lui Varlaam. The building's style is quite unusual among Romanian Orthodox buildings, although it is partly based on local religious tradition and partly on Byzantine architecture. Elements such as niches under the eaves, starry vaulting in the interior and lacquered discs in a variety of colours, can be seen in monasteries such as Cozia or Prislop. The church's interior and exterior paintings were created by the painter Atanasie Demian.
Image by Turbojet on Wikimedia under Creative Commons License.
Sight description based on wikipedia
8

The Piarist Church is the church of Piarist Monks Order, who came to Timisoara in 1788 and received the Franciscan monastery and the church of St. John Nepomuc, which were built between 1733 and 1736. In 1909, the Piarists built a new church and a school. The old church was taken and demolished by the city in 1911; 261 skeletons were moved from its tomb. This church has Neo-Byzantine, Hungarian and Baroque elements from the old Franciscan church. Piarists have been active after 1948 as well. Here lived and died, in 2005, the last Piarist in the country - P. Francis Valo O.Sch.P. Since then, the church was taken over by Roman Catholic priests of the Gerhardinum Theological Lyceum.
Image by Turbojet on Wikimedia under Creative Commons License.