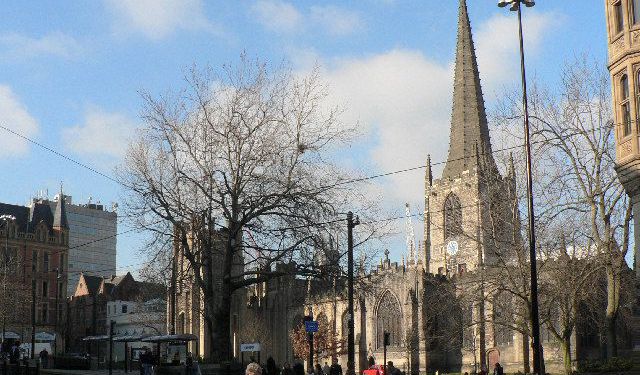 Image by Chris Cole on Wikimedia under Creative Commons License.

Sheffield is easily one of the most beautiful cities in England and loaded with a variety of prime religious buildings. Inside Sheffield one will discover old churches with fantastic architecture and exclusive mural paintings; as well as glorious facades with detailed sculptures and arched windows designed by the greatest artists of past centuries.
How it works: Download the app "GPSmyCity: Walks in 1K+ Cities" from iTunes App Store or Google Play to your mobile phone or tablet. The app turns your mobile device into a personal tour guide and its built-in GPS navigation functions guide you from one tour stop to next. The app works offline, so no data plan is needed when traveling abroad.

St Marie’s was completed in 1850 and opened on September 11th. During the Second World War a bomb blew out stained glass windows in the Blessed Sacrament chapel. The remaining windows were removed and stored in a shaft at Nunnery Colliery. When St Marie’s was re-ordered in 1970, following Vatican II, dark woodwork was removed and new lighting and benches were installed. In 1972, a new altar, allowing mass to be celebrated versus populum, was consecrated by Bishop Gerald Moverley, auxiliary Bishop of Leeds. The church building has been a Grade II listed building since 1973.
Image by JeremyA on Wikimedia under Creative Commons License.
Sight description based on wikipedia
2

Central United Reformed Church is located in the center of Sheffield. The church was built in the final years of the 20th century and is covered with a light green low roof. The roof matches the windows and is especially beautiful while the sun is out.
Image by Budby on Flickr under Creative Commons License.
3

Victoria Hall is a Methodist place of worship situated on Norfolk Street in Sheffield city centre. It is the most important Methodist building in Sheffield and it is a Grade II listed building. It is a large many roomed building which stands between the side streets of Chapel Walk and George Street. Although the main entrance to the church is on Norfolk Street, there is a separate administration entrance on Chapel Walk. Today the hall stands in an important position in the city centre, across from Tudor Square and close to the Crucible and Lyceum theaters. As well as a place of worship, the Hall is used by various voluntary organizations including meals for the homeless. It is a popular venue for classical music concerts and the function room is available for hire by the general public. There is a coffee morning between 10:00am and 12.00 Monday to Saturday.
Image by Mick Knapton on Wikimedia under Creative Commons License.
Sight description based on wikipedia
4

Sheffield Cathedral is one of five Grade I listed buildings in the city, along with Town Hall, Abbeydale Industrial Hamlet, and the parish churches at Ecclesfield and Bradfield. It is located in the city centre on Church Street and served by Sheffield Supertram's Cathedral stop. The East end of the current church is the oldest. In the east wall of the sanctuary there are stones from the 13th century church. Dating from the 15th century are the sanctuary and chancel. The pipe organ by N. P. Mander Ltd. was decommissioned in 1998 with a view to a long term replacement with another pipe organ. In the interim, a digital organ by Phoenix Organs is being used. In 2008 negotiations were undertaken with Warrington Borough Council to purchase their Cavaillé-Coll organ from the Parr Hall.The cathedral has 13 bells hung for change ringing, including a flat sixth bell. The bells are rung regularly for practice on a Thursday and for Sunday services, both in the morning and the evening.
Image by Ian Parkes on Wikimedia under Creative Commons License.
Sight description based on wikipedia
5

St Vincent’s Church is a currently disused Roman Catholic church situated on Solly Street at its junction with Hollis Croft in the centre of the City of Sheffield. Due to the war damage and continuing slum clearances in the post war St Vincent’s area, the church lost much of its congregation as the district was rebuilt as a business area. In 1998 it closed as a place of worship and is in need of some renovation with much of the land round the church used for car parking. The interior of the church is currently used for storing furniture for the Vincent's charity which recycles old furniture and redistributes it to the city's poorer and more vulnerable people. The church is now within the St Vincent's Quarter of Sheffield which is undergoing slow rejuvenation. Sheffield City Council are looking at new ways that the St Vincent’s group of buildings can be used in conjunction with the owners and the local community.
Image by Warofdreams on Wikimedia under Creative Commons License.
Sight description based on wikipedia
6

St George's Church is now part of the University of Sheffield and functions as a lecture theater and student housing. It was built in the Perpendicular style, 122 feet (37 m) long and 67 feet (20 m) wide, and consisted of a flat-ceilinged nave with six bays, a single-bay chancel, and a 140 feet (43 m) high tower. Galleries extended the length of the north and south walls, and there was a two-tiered gallery on the west wall. In all, the church could seat 2,000 people. The foundation stone was laid on 19 July 1821, and the church was consecrated by Archbishop Vernon Harcourt on 29 June 1825. It was acquired by the University of Sheffield, and in 1994 it was converted for use as a lecture theatre and student accommodation. Prior to this it had been the last of the Commissioners' churches in Sheffield to retain its original form. It is a Grade II listed building.
Image by JeremyA on Wikimedia under Creative Commons License.
Sight description based on wikipedia
7

It is a Grade II listed building. The church was built in the middle of the 19th century for the newly established St Matthews parish which was created when the original Sheffield parish was subdivided into smaller parts in 1848. The church which has been described as "a neat building with a graceful spire" cost £3,297 to build. There is an octagonal tower with a tall spire on top at the front (west) end of the church with the main entrance below on Carver Street. There are three main stained glass windows, the east window which dates from 1886 depicts the Incarnation and includes St Matthew and other saints in its design. The altar and reredos are also by Sedding with carvings by Frank Tory and a centerpiece painting of the Adoration by Nathaniel Westlake. The interior is richly furnished with many of the designs by Henry Wilson. The church organ dates from 1992, it is made in the classic British style by Martin Goetze and Dominic Gwynn.
Image by Mick Knapton on Wikimedia under Creative Commons License.
Sight description based on wikipedia
8

St Mary's Church is one of three churches that were built in Sheffield under the Church Building Act 1818 (the other two being St George's Church, Portobello and St Phillip's Church, Netherthorpe), and is the only one still to be used as a church. The church was designed by Joseph Potter and cost £13,927 (£1,020,000 as of 2010). A grant of £13,941 was received from the Church Building Commission to cover the cost of building and other expenses. The foundation stone was laid on 12 October 1826 by the Countess of Surrey, and the church was consecrated on 21 July 1830. The church is built in the Perpendicular style, with a 140 feet (43 m) high tower, It was damaged by bombing during the "Sheffield Blitz" and when restored was divided: the chancel and two east bays of the nave remain in use as a church, the rest of the building is used as a community centre. It is a Grade II* listed building.
Image by Warofdreams on Wikimedia under Creative Commons License.
Sight description based on wikipedia