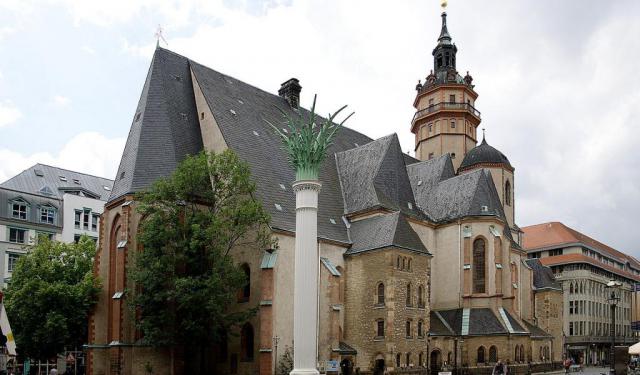 Image by Appaloosa on Wikimedia under Creative Commons License.

Leipzig has a large variety of amazing churches to discover. These architectural masterpieces grace the city's streets and squares. Follow this tour to see Leipzig’s most fascinating and popular religious buildings.
How it works: Download the app "GPSmyCity: Walks in 1K+ Cities" from iTunes App Store or Google Play to your mobile phone or tablet. The app turns your mobile device into a personal tour guide and its built-in GPS navigation functions guide you from one tour stop to next. The app works offline, so no data plan is needed when traveling abroad.

While many of the city's attractions are located in the center, a visit to Gohlis, a small village in the countryside, is well worth it. A part of the city since the late 19th century, it is where Friedenskirche can be found. Construction of this Neo-Gothic church began in 1871, designed by architect Hugo Altendorff. The church’s tower offers a great view of the surrounding landscape.
Image by Lumu on Wikimedia under Creative Commons License.
2

The Michaeliskirche has survived the destruction of the war unscathed and is distinguished by the original design of other church buildings of the epoch.

Image by Bbb on Wikimedia under Creative Commons License.
Sight description based on wikipedia
3

Reformierte Kirche, founded in 1899, was designed by George and Richard Weidenbach Tschammer in a Neo-Renaissance style. It has a 73 meter tower which was damaged in 1943, postponing its completion until 1969. Nowadays, the church offers concerts, community events and prayer services.
Image by Jaime Silva on Flickr under Creative Commons License.
4

Image by Appaloosa on Wikimedia under Creative Commons License.
Sight description based on wikipedia
5

St. Thomas Church, a Lutheran church, is most famous as the place where Johann Sebastian Bach worked as a cantor, and where his remains currently lie. Between 1212 and 1222 the former church became the St. Thomas Monastery of the Augustinian Order. In 1217, Minnesinger Heinrich von Morungen bequeathed a relic of St. Thomas following a trip to India. After several reconstructions, the current late Gothic building was consecrated by Thilo of Trotha, the Bishop of Merseburg, on April 10, 1496.
Image by lostajy on Flickr under Creative Commons License.
Sight description based on wikipedia
6

Located near Johannapark, Luther Church, founded in 1887, was designed in the Gothic style by Julius Zeißig. It has been used as a concert hall, exhibition hall and a meeting place. Named after the originator of the Protestant Reformation, Martin Luther, the church is used sporadically but still attracts many tourists.
Image by JeanNeef on Wikimedia under Creative Commons License.
7

St. Peter Church, a Lutheran church founded in 1885, was designed by architects Hartel and Lipsius in the Neo-Gothic style. The interior houses many old sculptures of the Apostles and the altar is adorned with carved figures and paintings. The church also possesses the highest tower in the city.
Image by Johannes Kazah on Wikimedia under Creative Commons License.