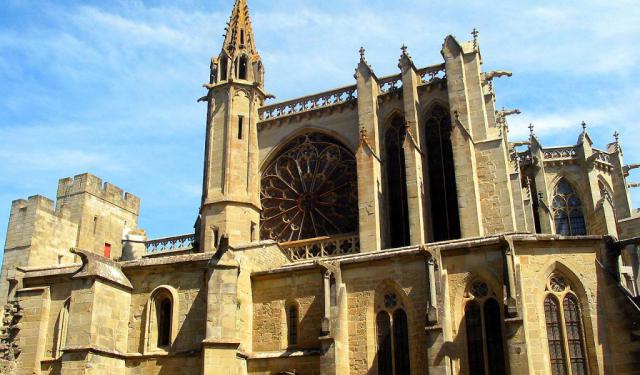 Image by Jean-Pol GRANDMONT on Wikimedia under Creative Commons License.

Carcassonne is remarkable for its impressive churches and cathedrals. The majority of them were built in Gothic Languedoc style and are noteworthy given their stained glass windows, large choirs and interesting architectural elements. Take this tour and discover them all.
How it works: Download the app "GPSmyCity: Walks in 1K+ Cities" from iTunes App Store or Google Play to your mobile phone or tablet. The app turns your mobile device into a personal tour guide and its built-in GPS navigation functions guide you from one tour stop to next. The app works offline, so no data plan is needed when traveling abroad.

The small, reformed Protestant community was organized in 1842, but only from 1878 and on did it have a resident pastor, Adolphe Monod, who contributed to the building of the Protestant church on Antoine Marty Street in 1890. The building is an Anglican church, but in order not to shock the local Catholics too much, its facade is relatively neutral and decorated with stained glass.
Image by Tambako The Jaguar on Flickr under Creative Commons License.
2

Eglise des Carmes has an important historic value, proving that certain regions had their own chapel. It consists of a nave 12 m wide and 17 m long, bordered by twelve chapels of the nineteenth century, of which only ten remained. It was built according to the same plan as the Cathedral of St. Michael and St. Vincent Church, in Gothic Languedocien style, and it is a rather plain church, but not without decorations, paintings and sculptures.
Image by mescladis.free.fr under Creative Commons License.
3

St. Vincent Church is a beautiful example of Gothic Languedoc style with a wide nave and imposing vault, an octagonal tower with a square base which houses a carillon of 47 bells. It boasts rich art furniture such as tables and a lectern of the seventeenth century, paintings of Gamelin, Nicolas and Pierre Mignard Subleyras and rosettes and windows from the fifteenth century. In the niches of the main portal are 4 beautiful stone statues of the fourteenth century that represent St. Vincent in a bishop costume, St. Louis, founder of the city and two apostles.
Image by Pinpin on Wikimedia under Creative Commons License.
4

The first stone of the chapel was laid in 1640. It is part of the Jesuit college which went through transformations over the years, before being used as "Museum" by Jacques Gamelin, painter and teacher at the Ecole Centrale de l'Aude, which makes it an Exhibition center of paintings. For decades, the chapel fell into oblivion and was in a state of disrepair and neglect, until 2000 when it was remarkably restored in its Baroque elements, with curved coffered ceilings, galleries and balustrades, an octagonal tower and gate; it was given a new cultural life.
Image by Esejotas on Wikimedia under Creative Commons License.
5

Carcassonne Cathedral (Cathédrale Saint-Michel de Carcassonne) is a cathedral and designated national monument in Carcassonne. It is the seat of the Roman Catholic Bishop of Carcassonne. The building was built in the thirteenth-century as a parish church, dedicated to Saint Michael. Following war damage in the fourteenth century it was subsequently rebuilt as a fortified church. In 1803 St Michael's was elevated to cathedral status, replacing the pre-Revolutionary cathedral dedicated to Saints Nazarius and Celsus. The old cathedral now serves as the Basilica of St. Nazaire and St. Celse.
Image by Florent Pécassou on Wikimedia under Creative Commons License.
Sight description based on wikipedia
6

Chapelle des Dominicains, situated on Rue de Verdun, was built in the Gothic Languedoc style as were the majority of religious sites in the city, with stained glass windows and beautiful decorative elements. The chapel often hosts different expositions and meetings, thus having an important cultural role.
Image by cyrildoussin on Flickr under Creative Commons License.
7

According to notarial acts, the little chapel Notre Dame de la Santé was built with money from the legacy of Jean de Saix, in 1527, as a hospital for those suffering from the plague. It was considered a faithful guard in that strategic location, the narrow passage between fortified buildings. On December 18, 1685, it was agreed to expand the chapel beside the south wind on the river Aude.
Image by Flickr.Whisker on Flickr under Creative Commons License.
8

The church Saint-Gimer was built between 1854 and 1859, by architect Eugène Viollet-le-Duc. Modesty was one of its stated goals; it has a nave and two aisles and a polygonal apse stationed on two vestries, all preceded by a porch. For this church, whose agenda is that of a single parish, Viollet-le-Duc preferred simplicity, while appealing to a repertoire of forms that could be called "Gothic", but not hesitating to create new forms.
Image by Pinpin on Wikimedia under Creative Commons License.

Perched atop a hill in Southern France's region of Languedoc, the town of Carcassonne is noted primarily for its medieval citadel, La Cité, surrounded with numerous watchtowers and double-walled fortifications. Another key local attraction is a 12th-century Château Comtal, situated within the Cité, replete with archaeological findings and inner ramparts. To explore these and other historic...  view more