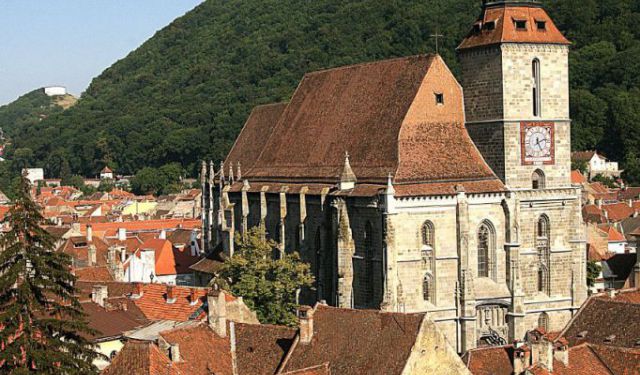 Image by Giåm on Flickr under Creative Commons License.

Brasov is a religious city boasting a number of churches, monasteries, cathedrals, and synagogues which are historic monuments as well. Almost every religious building here represents an architectural heritage. The most notable examples are those built in the Middle Ages that are well-preserved today. Take this walking tour to see Brasov’s most famous religious buildings.
How it works: Download the app "GPSmyCity: Walks in 1K+ Cities" from iTunes App Store or Google Play to your mobile phone or tablet. The app turns your mobile device into a personal tour guide and its built-in GPS navigation functions guide you from one tour stop to next. The app works offline, so no data plan is needed when traveling abroad.

Saint Nicholas Church is a Romanian Orthodox church in Braşov, dominating the historic district of Şchei. The church was established in 1292. It was mentioned in a Papal bull issued in 1399 by Pope Boniface IX. Starting in 1495, the church was rebuilt in stone by the locals, with help from Vlad Călugărul, Voivode (Prince) of Wallachia. More help was provided around 1512 by Neagoe Basarab. Initially built in the Gothic style, it was later redone in the Baroque style. It has frescoes painted by the renowned muralist Mişu Popp. Next to St. Nicholas Church is the First Romanian School (started in 1583), and a statue of Coresi. Nearby is a cemetery, where Ioan Meşotă, Aurel Popovici, Vasile Saftu, and Nicolae Titulescu are buried.
Image by Ágoston Berecz on Wikimedia under Creative Commons License.
Sight description based on wikipedia
2

Saint Parascheva Orthodox Church was erected between 1874 and 1876 with the help of Brasov priest Bartholomeu Baiulescu. The church was constructed with stone and brick in the form of a cross crowned with a dome with 16 windows. There are mosaic elements in its façade and three stained glass windows. The roof has 10 towers and a belfry with two bells. The interior is decorated with painted frescoes by Iosif Vasu. The icons from the iconostasis date from 1838. There is cemetery adjoining Saint Paraschiva Church where notable Romanian people were buried: poet Andrei Muresanu, composer Iacob Muresanu, professor Andrei Bârsenu, philologist Sextil Puscariu, priest Bartolomeu Baiulescu and others.
Image by Alex:D on Wikimedia under Creative Commons License.
3

In 1877 the Brasov Jewish community was divided into two groups: Orthodox Jews and Reformed Jews and two separate synagogues where built. The Orthodox Synagogue was constructed in 1924 in the Mudéjar style with a total area of 365 sq. m. The exterior of the building is ornate with ceramic mosaics, elements of plants and two lions supporting a candelabrum. Currently, the synagogue is not open.
Image by Emmanuel DYAN on Wikimedia under Creative Commons License.
4

The first families of Jews moved to Brasov in 1807. The Reformed Synagogue was constructed in 1901 by architect Leopold Baumhorn but was heavily damaged during the World War II. The renovations were done 100 years from its foundation. The total area of the building is 658 sq. m. The synagogue was constructed in Neogothic architectural style with elements of Mudéjar. In 2004 the Reformed Synagogue was included in the list of Brasov historic monuments.
Image by Alex:D on Wikimedia under Creative Commons License.
5

Biserica Neagră or Black Church is a magnificent cathedral built by the local German community; hence the typically German Gothic style. This is the largest Lutheran church in Transylvania, standing 65 meters high, 89 meters long and 38 meters wide. The cathedral has a six-ton bell - the biggest bell in Romania, an impressive 4,000 pipe organ built in 1839, and a rich collection of Anatolian carpets (donated in the Middle Ages by Transylvanian Saxon merchants).
Image by Alex:D on Wikimedia under Creative Commons License.
6

The construction of the Romanian Orthodox Cathedral began in 1894 with the help of 114 Orthodox families' donations. It is located in the centre of Brasov Old Town, on Piata Sfatului. The church has a tower constructed in Byzantine style that was destroyed in 1940 and reconstructed in its original form 30 years later. The interior is beautifully decorated with ornaments and paintings. The pride of the church is its Brasov School's iconostasis.
Image by Alex:D on Wikimedia under Creative Commons License.
7

Franciscan Church, included in the list of city’s historic monuments, was built in the 15th century and renovated in the 17th century. The building is done in Gothic style, with a not large but high trapezoidal hall and polygonal vaulted choir. There is a slab above the entrance commemorating 1724. The roof of the hall is supported by vaults made in Baroque style. The Baroque pulpit and three altars were made in 1729.
Image by Ágoston Berecz on Wikimedia under Creative Commons License.
8

The Catholic Cathedral is one of the few Baroque buildings in the city. It was built between 1773 and 1787 by architect Lamanch József Károly with the support of Empress Maria Tereza. The main altar was gilded and is adorned with wooden elements. The other six altars are decorated with sculptures and paintings. The organ dates from the period between the two World Wars. The stained glass windows were created in Budapest in the end of the 19th century. The monumental cross was raised in 1782 and the way to it is presented by 14 paintings. There are statues of St. Peter and Paul, St. Ann and St. Anthony of Padua still preserved in the sanctuary.
Image by Auguste on Wikimedia under Creative Commons License.
9

The evangelical church of Saint Martin is one of the oldest monuments in the city. It was mentioned for the first time when King Sigismund ordered a celebration there, in 1395. The first owners of the place were Franciscans. It was also the first residence of Brasov Administration and the place where the treaty of collaboration between Mircea cel Bătrân and Sigismund from Luxemburg was signed. The church got its present look in 1792. The interior decoration also dates back to the end of the 18th century.
Image by Ágoston Berecz on Wikimedia under Creative Commons License.

This orientation walk covers top 14 attractions of Brasov, including the city's medieval fortifications, museums, and architectural monuments. The imposing grandeur of these magnificent structures stands witness of and provides insight into the city's eventful history, both ancient and recent.

Transylvanian culture is very rich in artistic masterpieces, notable cultural figures and venues. Brasov theatrical and musical productions became successful both on Romanian and international stages. The city boasts a number of memorial houses of national poets, painters, musicians, journalists and other distinguished people. Art is part of everyday life in Brasov; some of the city’s cafes are...  view more

Brasov cultural and historical heritage is immense. It is reflected in the city’s museums and memorial houses. Most of the museums are located in beautiful historic edifices with grand architecture. Visiting Brasov museums you will learn the history of the city, daily life of medieval residents, local arts development and see the first Romanian school with the oldest printed books. Take this...  view more