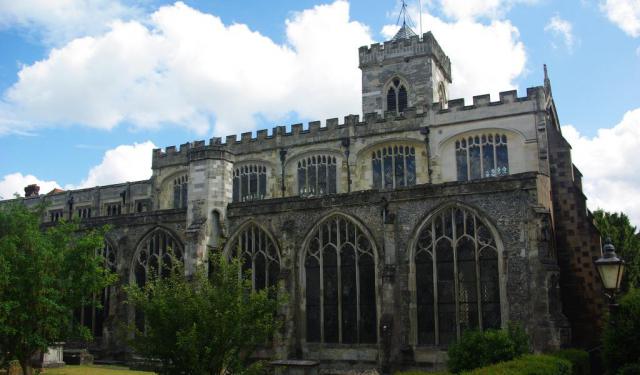 Image by GrossoMatto on Flickr under Creative Commons License.

Salisbury welcomes people of many different faiths, and you can find Catholic, Anglican, Baptist, and other religious institutions represented here. Most places of worship in the city, however, belong to the Anglican Church, which has historically had a strong presence in Salisbury and the country as a whole. This walking tour will guide you to the most notable religious sites in central Salisbury.
How it works: Download the app "GPSmyCity: Walks in 1K+ Cities" from iTunes App Store or Google Play to your mobile phone or tablet. The app turns your mobile device into a personal tour guide and its built-in GPS navigation functions guide you from one tour stop to next. The app works offline, so no data plan is needed when traveling abroad.

Salisbury Methodist Church was founded in the early 1750s, and the congregation moved into the former St. Edmund's Church. In 1810, the church was expanded to accommodate the growing congregation, and another remodeling project occurred as recently as 1992. Salisbury Methodist Church is famous for its stained glass windows, which were installed in 1889 to honor George Truckle, a local preacher.
Image by Chris Talbot under Creative Commons License.
2

Salisbury Baptist Church, located on Brown Street, was built in 1829. It was renovated in 1935 and again in the late 1980s. During the most recent renovation, another story was added to accommodate a hall, meeting space and expanded worship area.
Image by Peter Facey on Wikimedia under Creative Commons License.
3

In the second half of 17th century, Augustus W. Pugin, an English architect and leader of the Gothic Revival, designed St. Osmund's Church. Construction on the church started in 1847, and in 1848 the church was consecrated. The structure is beautiful and simple with well-balanced proportions. It is faced with flint and stone. There is a statue of St. Osmund at the western door.
Image by St. Osmund's Parish under Creative Commons License.
4

Known locally as St. Thomas's Church, the Church of St. Thomas Becket was once Salisbury’s premier place of worship. The primary wooden building of the church was constructed at the beginning of the 13th century in the Gothic style. Amazingly enough, the more recent part of the church dates back to the 15th century. One of the church's greatest treasures is its medieval mural of the Last Judgment, which was created in 1475. The sanctuary and aisles of the church have slender pillars and foliated capitals. The roof features elaborately carved angels.
Image by Andrew Mathewson on Flickr under Creative Commons License.
5

Salisbury United Reformed Church is located in the center of the city on Fisherton Street. It was built in the 1870s in the Gothic Revival style, although the pointed archway is in the Medieval style. It has a steeply-pitched roof like a castle. The church was extensively renovated in 1978. Today the Salisbury URS has congregations throughout Great Britain.
Image by asianfiercetiger on Flickr under Creative Commons License.
6

St Paul’s Church Salisbury is located on the north-west side of city, next to St Paul’s Roundabout and just a short walk from the city centre and Salisbury train station. St. Paul's church replaced the church of St. Clement, demolished in 1852, to serve the expanding population of this area of Salisbury. The foundation stone was laid in 1851 and the church consecrated in 1853.

It was designed by T.H. Wyatt in the Early Decorated style and originally had a chancel, a nave of six bays, a south aisle, a west gallery, a south porch and a tower. The tower buttresses, some of the interior arches, piers, and the font were all brought from the demolished church of St. Clement's. The new tower was made the same size as that of St. Clement's to accommodate the bell frame timbers and the six bells from the old church. In 1876 a north aisle and a west porch were added.

The chancel walls were coloured in 1880 and in 1883 painted texts were places over the arches. There was a restoration with various alterations in 1898 and a restoration of the chancel in 1910. Various monuments had been brought from St. Clement's in 1852 and placed in the new church.

The parish registers from 1654 (christenings and marriages) and 1653 (burials), other than those in current use, are held in the Wiltshire and Swindon Record Office.

Image by Sjs889 on Wikimedia under Creative Commons License.
Sight description based on wikipedia