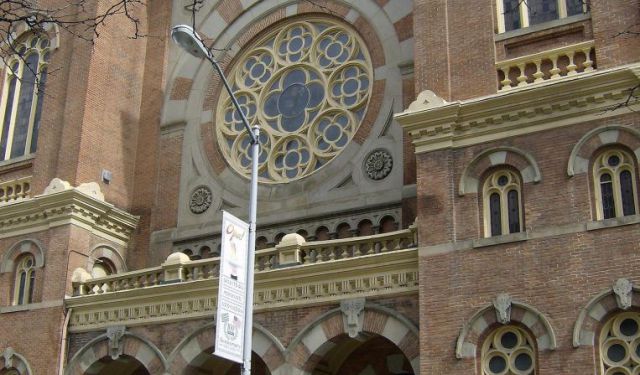 Detroit is a multicultural city, which is reflected in the variety of churches found here. There are splendid Orthodox and Catholic cathedrals, as well as historic Protestant churches. This self-guided tour will lead you to Detroit's most magnificent places of worship.
How it works: Download the app "GPSmyCity: Walks in 1K+ Cities" from iTunes App Store or Google Play to your mobile phone or tablet. The app turns your mobile device into a personal tour guide and its built-in GPS navigation functions guide you from one tour stop to next. The app works offline, so no data plan is needed when traveling abroad.

The Saints Peter And Paul Church is a Roman Catholic church located at 629 East Jefferson Ave in Detroit. It is the oldest existing church in the city of Detroit. In 1844, Bishop Peter Paul Lefevere, the leader of the Detroit Catholic church, began construction on Saints Peter And Paul Church; the cornerstone is dated June 29, 1844. Construction was completed over four years, as the Bishop paid for each stage of construction with cash. The church was consecrated on June 29, 1848 and Bishop Lefevere used the church as his cathedral until his death in 1869. The original parishioners were predominantly Irish, with some French families attending.

Lefevere's successor, Caspar Borgess, continued to use the church as his cathedral until 1877, when he gave the title to the building to the Jesuit Order with the intention of starting Detroit's first Catholic college. The Jesuit college eventually became the University of Detroit-Mercy, and UDM's law school still occupies the building adjacent to the church. The church was altered in 1879 and 1882, completely renovated in 1892, and remodeled again in 1911. A chapel was added to the rear of the building in 1918. Although these alterations changed the look of the church, the original plan has been substantially preserved. The church is still in use, offering daily masses.

Image by Andrew Jameson on Wikimedia under Creative Commons License.
Sight description based on wikipedia
2

The Annunciation Greek Orthodox Cathedral is located in historic Greektown and was founded in 1910. This 100-year-old church has a large, central, blue dome and multiple semi-domes on the sides and at the front. An arch denotes the entrance to the church. Be sure to venture inside, as there are many beautiful religious paintings on display.
Image by Argos'Dad on Wikimedia under Creative Commons License.
3

Image by Mikerussell on Wikimedia under Creative Commons License.
Sight description based on wikipedia
4

Trinity Lutheran Church is a historic Detroit church currently registered as a National Historic Site. At 150 years old, it is the oldest church in this region and is the most famous Lutheran church in the city. The church was built from red brick and incorporates decorative elements made of glass, wood, tile and brass. The church is an excellent example of the 16th-century Pier and Clerestory Gothic styles of architecture.
Image by Andrew Jameson on Wikimedia under Creative Commons License.
5

Image by Andrew Jameson on Wikimedia under Creative Commons License.
Sight description based on wikipedia
6

In 1911, some of the newer black residents of the Catholic faith established a chapel at old St. Mary's. In 1914, the growing congregation moved to a converted Episcopalian church at Eliot and Beaubien. The church flourished, and in the late 1930s, the congregation petitioned to move to the nearby Sacred Heart, due in part to the school building on the site. In 1938, Sacred Heart was converted from a German parish to an African American parish. The congregation at this time measured approximately 1500 members, and they quickly utilized the school at Sacred Heart, graduating the first high school class in 1945.
Image by Andrew Jameson on Wikimedia under Creative Commons License.
7

Sweetest Heart of Mary is one of the largest and perhaps most impressive Gothic Revival Cathedral Churches in the Midwest. The church is constructed of red brick in a cruciform shape with a cross gabled roof. The facade on Russell boasts a rusticated stone lower level with a triple portal, a pointed arch structure, and a stone balustrade atop everything. Two towers flank the entrance, topped with identical Spires, which are capped with buttresses and detailed with crosses.
Image by Andrew_Jameson on Wikimedia under Creative Commons License.
Sight description based on wikipedia
8

St. Albertus Roman Catholic Church is a church located at 4231 St. Aubin Street in Detroit in the Forest Park neighborhood area on the city's central East side. It is a brick building 200 ft (61 m) long and 70 ft (21 m) wide, with a spire originally 280 ft (85 m) tall. The original spire was shortened after being damaged in a windstorm on Good Friday of 1913.

Contrasting with the plain brick of the exterior, the interior of St. Albertus has an ornate Medieval flair. The altars, baptismal font, and the wainscot are made of patterned terra-cotta. The ceiling is ornately painted. Sixty-three pieces of painted plaster sculpture are within the church, and the windows are decorated with Medieval-style stained glass.
Image by Andrew Jameson on Wikimedia under Creative Commons License.
Sight description based on wikipedia