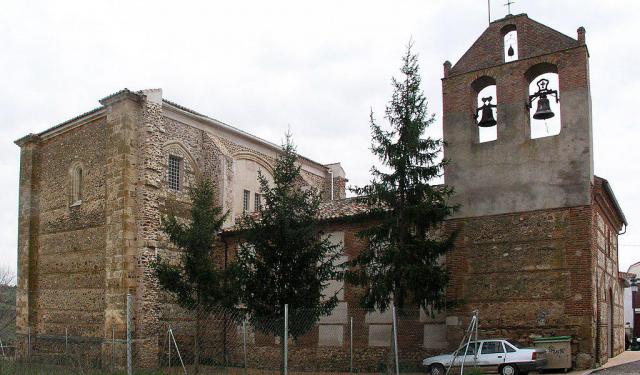 Image by Xauxa on Wikimedia under Creative Commons License.

Historical Churches in Malaga, Part I (Self Guided), Malaga

Malaga is a city that actually boasts its incredulous number of treasures; among these, there are quite a number of religious venues that will surely attract the attention of a visitor. The churches in Malaga have a breathtaking architectural style; various style combinations can be observed and contemplated. Take this tour to visit the utmost prominent religious buildings in Malaga.
How it works: Download the app "GPSmyCity: Walks in 1K+ Cities" from iTunes App Store or Google Play to your mobile phone or tablet. The app turns your mobile device into a personal tour guide and its built-in GPS navigation functions guide you from one tour stop to next. The app works offline, so no data plan is needed when traveling abroad.

This parish church is located in the historical El Perchel neighborhood of Malaga. The location has many old buildings that reflect its fishing port history. The church has many relics with sailing boat themes dedicated to St. Carmen the patron saint of sailors and fishermen.

The parish of Saint Carmen was established in 1584. The earthquake of 1680 destroyed the original parish church. After the destruction, construction of a new church began in the 17th century and continued till the 18th century. The church also has a chapel of the brotherhood of Mercy, one of the fraternities that go on procession in Malaga on Holy Week. During the civil war, the building served as a warehouse.

The Iglesia del Carmen has two anchors at the entrance in honor of the patron saint of sailors and fishermen. The façade has ceramic panels depicting the Holy Virgin. It has three naves with chapels. There are images of the procession of Semana Santa or the Holy Week. The statue of the Virgin of Carmen was sculpted by artist, Jose Even Navas in 1945. There is also a magnificent altar dedicated to the Virgin of Carmen.

Image by Tyk on Wikimedia under Creative Commons License.
2

The origin of San Pedro Iglesia’s building dates back to an ambitious unfinished project led by Pedro Diaz de Palacios, who was commissioned in 1629 to oversee the construction of Iglesia San Pedro in the neighborhood of El Perchel. Due to events that took place in the early 20th century and following the events in 1931 and 1936 (the building was found in ruins), projects were presented in 1942 and 1943 by architect Enrique Atencia in order to rebuild it. The church’s structure was respected, but two chapels were added to house the images of the Cofradía del Cristo de la Expiración.
Image by alf.melin on Wikimedia under Creative Commons License.
3

Parroquia Santo Domingo De Guzman of Malaga dates back to the 15th century. The church’s external form is somewhat peculiar because of the demolition of some surrounding buildings, resulting in an irregular perimeter. The interior space is divided into three naves separated by arches on cruciform pillars. The building is presented as a set of detached buildings, mostly two-storey ones, difficult to interpret in the current fragmented urban context.
Image by Olaf Tausch on Wikimedia under Creative Commons License.
4

This parish church presides over one of the four parishes established in Málaga after the defeat of the Moors in 1487. Two fraternities that go on procession on Holy Week have chapels within the building. The fraternity of sorrows of San Juan occupies the sacramental chapel and a chapel in the right aisle and the Fused brotherhood occupies four chapels, three in the left aisle and one at the foot of the right aisle.

The church was constructed combining Gothic and Mujedar architectural styles with Moorish arches and pillars. A tower was completed in 1543. The 1680 earthquake damaged the structure including the tower. A baroque style tower porch leading to the building was erected at the entrance of the church in 1770 and reconstruction of the church was completed in 1780. The tower porch has a rectangular shape with an elliptical dome. The chapels and altarpiece of the church are richly carved. There is a splendid 17th-century statue of San Juan by the artist, Franciso Ortiz.

The building has undergone periodic restoration. Extensive repairs were carried out in 1962. Recently, the interiors were given a makeover and the church was repainted from beige to the original white.

Why You Should Visit:
Stands out for its huge tower and very unusual exterior murals from the 18th century.
The interior is a soft shade of blue and also impressive, including the richly decorated altar.

Image by Olaf Tausch on Wikimedia under Creative Commons License.
5

This Catholic Church, dedicated to the Holy Christ of Health was built by the Jesuits in Malaga. The church got its present name from the miraculous healing that took place during an epidemic that ravaged Malaga in 1649.

At first a small chapel of St. Sebastian stood on the site of the church. The Jesuit order found the church too small for worship and the Bishop of Malaga, Salcedo Blanco donated a larger piece of land for the church in 1572. The building has an unusual design with a large eight sided roof on an octagonal base. There is a small cupola at the top of the roof. The church stands on a narrow street and is an example of Spanish mannerism and a baroque style of architecture unique to Malaga. It was consecrated in 1630.

The Iglesia del Santo Cristo de la Salud has an ornate interior with a high altar and tabernacle designed by Jesuit Priests, Angel Cortes and Diaz de Ribero. A small chapel for Saint Peter was added by Jose Martin de Aldeheula in 1787. At the back of the church is a chapel dedicated to Christ crucified and Our Lady Vergen Dolorosa. The sculptures at the altar are from the 17th century Seville School.
Image by Miwipedia on Wikimedia under Creative Commons License.
6

Iglesia del Sagrado Corazón is located in the Plaza de San Ignacio de Loyola. It is a neo-Gothic building constructed in 1920, according to the architectural plans of Fernando Guerrero Strachan, who was commissioned by the Jesuits. It has a basilica, divided into three naves. This church was the seat of the Archicofradía del Santísimo Cristo de la Redención y Nuestra Señora de los Dolores, for as long as their original home, Iglesia de San Juan, was being restored.

Why You Should Visit:
Another of the myriad impressive churches that can be found in (or around) Málaga city centre.
Might be tucked away and overshadowed by the Cathedral but certainly, the cleaned stonework is very pretty – especially so, when floodlit.
Image by Olaf Tausch on Wikimedia under Creative Commons License.
7

Iglesia de San Pablo is a Christian Catholic temple located in the neighbourhood La Trinidad of Malaga. It is the work of architect Jerónimo Cuervo and was built between 1874 and 1891. Designed in the neo - Gothic style, its main façade consists of an oval - shaped front, flanked by columns on each of its sides. Its interior consists of three naves; its 50 meter high tower ends in a square pyramid, with pinnacles adorned with ceramic decorations of floral form.
Image by Morancio on Wikimedia under Creative Commons License.
8

Iglesia de Nuestra Señora de Fátima is a Christian Catholic temple. The church was canonically established in 1956 by the Bishop of Malaga, don Ángel Herrera Oria, one of the most respected and remembered bishops of the city, but it was not blessed until the year that the construction was finished. The church, located on the right bank of the river Guadalmedina, in the district La Trinidad, was finally completed in 1961, according to the design of architect Fernando Morilla Cabello. The temple’s style is a mix of modern and neo - Gothic elements, making it a valuable piece of avant-garde modern architecture.
Image by Morancio on Wikimedia under Creative Commons License.
9

La Trinidad neighborhood of Malaga is an old neighborhood that not long ago turned 500 years old. In this very same neighborhood are located the convent and the Parroquia Santisima Trinidad. The convent and the church were initiatives of Ferdinand and Isabella driven from their authority and affection for the monks. It is one of the many churches of Malaga that is attractive through its architectural characteristics.
Image by Antonio Ruiz-Molero on Flickr under Creative Commons License.