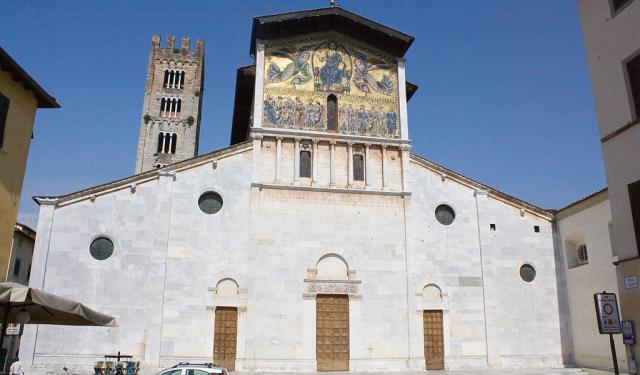 Image by Richard Barrett-Small on Wikimedia under Creative Commons License.

Lucca is a marvelous city that keeps the Walled City of Lucca teeming with places of worship. Their original design is retained and beautifully renovated in some of the churches. Take this part of the tour guide to admire the historical and religious buildings of Lucca.
How it works: Download the app "GPSmyCity: Walks in 1K+ Cities" from iTunes App Store or Google Play to your mobile phone or tablet. The app turns your mobile device into a personal tour guide and its built-in GPS navigation functions guide you from one tour stop to next. The app works offline, so no data plan is needed when traveling abroad.

The presence of Franciscan monks in Lucca was already attested in 1228, and the new religious order had just took a prominent role in city life. The Church of San Francesco, built out of gravel, is a single classroom with a trussed roof. It was completed in the early 15th century with the inclusion of three presbyterate chapels. The façade, which shows two sides of the portal arche sepulchral, adopted a coat of white limestone, which remained incomplete, and was completed only in the 20th century. The care taken with the interior design, is in parallel with the construction of the complex, which took from the 14th century to the 17th century. After reacquisition by the state in the 19th century, part of the collection of paintings were moved to the museum in Lucca.
Image by sailko on Wikimedia under Creative Commons License.
Sight description based on wikipedia
2

St. Peter's Church is located in the square of the same name, which is characteristic of the city. It was founded in the eighth century by Summal. The church was rebuilt in the late twelfth century. The apse of the church is made of brick and there are three aisles made of sandstone that complete the upper part of the facade. The central entrance and other parts of the church, which are the single pieces that survived, were remade in the nineteenth century.
Image by Robespierre on Wikimedia under Creative Commons License.
3

3) Church of San Frediano (must see)

The Basilica of San Frediano is a Romanesque church in Lucca, situated on the Piazza San Frediano. Inside, the basilica is built in richly carved white marble. It consists of a nave and two aisles with arches supported by columns with Roman and Romanesque capitals. The Roman capitals were recycled from the nearby Roman amphitheatre. The highlight at the entrance is the huge 12th century Romanesque baptismal font. It is composed of a bowl, covered with a tempietto, resting on pillars, inside a circular basin. It is the craftmanship of master Roberto (his signature is on the basin) and two unknown masters. The basin is decorated with The Story of Moses by a Lombard sculptor. Master Roberto did the last two panels The Good Shepherd and the Six Prophets.

The remains of St. Frediano lie underneath the main altar from the 16th century. A massive stone monolith stands left of the main altar. This was probably pilfered from the amphiteatre of Lucca. But local tradition has it that it was miraculously transported to Lucca by San Frediano and used as a predella (step of an altar) for the first altar.

Image by Georges Jansoone on Wikimedia under Creative Commons License.
Sight description based on wikipedia
4

St. Andrew's Church was built in the eleventh century and completely reestablished in the late twelfth century. The structure consists of rows of sandstone and the central entrance is designed by Guidetto. At the end of the fourteenth century the church was enriched and adorned with new chapels, frescoes and altarpieces by some of the most significant urban families from Lucca. Saint Andrew's Church is located on Sant'Andrea Street.
Image by sailko on Wikimedia under Creative Commons License.
5

The Church of St. Christopher was established in the eleventh century and reestablished in the middle of the twelfth century. Some decorative and original motifs can be observed in the entrance. It is surrounded by stone arches that extend the entire side of the façade. The upper side of the building is represented by a tower. On the sides there are two sculpted lions that are now reduced to a fragmentary state. The central window and the arches date back to the fourteenth century.
Image by sailko on Wikimedia under Creative Commons License.
6

The Church of Santa Maria Forisportam is also known as the Church of Santa Maria Bianca from Lucca, located in Santa Maria Bianca Square. The name of the church is linked to the fact that the church was connected to the part of the city outside the walls. The façade is divided into several parts; the first one is divided by three portals and the second one is characterized by a double series of loggias. There are three naves that were completed in the twelfth century. From inside, the columns show the Medieval design.
Image by sailko on Wikimedia under Creative Commons License.
7

The Holy Trinity Church is situated on Via Elisa and was completed in 1595. It is characterized by a single room covered by a barrel vault and the presence of an altar. The original and complex decoration started in 1595 and was finished in 1721. The paintings on the altar describe the Trinity with Saints John the Baptist, Paul, Sebastian, Antonio and Caterina Pietro Paolini. On one side of the altar the Madonna del Latte made by Matteo Civitali can be seen. The decoration of the Holy Trinity was made by Pietro Sorri and was completed in 1721.
Image by sailko on Wikimedia under Creative Commons License.
8

The Church of San Micheletto is located in the same area where a monastery was used until the fifteenth century. The foundation of the church is dedicated to St. Michael. It dates from the eighth century and there is only a frame and some reused columns on the left side of the church which have been replaced. In the eighteenth century it was completely renovated.
Image by sailko on Wikimedia under Creative Commons License.
9

The Monastery-Sanctuary of St Gemma is also known as the Monastery of Passioniste. It is located outside the Walled City of Lucca. The Monastery is dedicated to Saint Gemma Galgani who lived there. She had a vision of Christ who told her about the new monastery. So in 1935, architect Italo started working on the structure and after the war, the construction was completed. The bell-dome seems to be an inspiration by the Berlin Cathedral. Inside there is an altarpiece and two mosaics that are made by Primo Conti.
Image by sailko on Wikimedia under Creative Commons License.