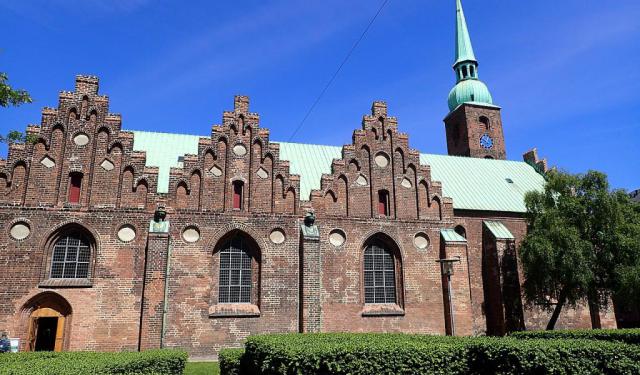 Image by RhinoMind on Wikimedia under Creative Commons License.

Aarhus churches provide a good insight into Denmark’s cultural and religious heritage. This tour reveals Danish churches of various architectural styles, all charming in their own way. The two major historical churches in Aarhus are Aarhus Cathedral and the Church of Our Lady. Don’t miss the opportunity to check out the magnificent churches Aarhus has to offer.
How it works: Download the app "GPSmyCity: Walks in 1K+ Cities" from iTunes App Store or Google Play to your mobile phone or tablet. The app turns your mobile device into a personal tour guide and its built-in GPS navigation functions guide you from one tour stop to next. The app works offline, so no data plan is needed when traveling abroad.

Langenæskirken was built in 1966, designed by architect Arne Gravers. The red brick church and its grey tower topped with a cross utilize glass in their construction, a unique modern combination. The church organ was built in 1970. Worship services are held on Sundays at 10:00 am.
Image by Asp on Wikimedia under Creative Commons License.
2

This Neoclassical parish church, built in 1926, was designed by Anton Frederiksen & Kaj Gottlob. It provides a variety of youth activities, as well as a host of special activities and services for its congregation.
Image by Nico-dk on Wikimedia under Creative Commons License.
3

St Paul's Church is a parish church built in 1887, was designed by architect Th. Walther in the Neo-Romanesque style. It has two identical towers with green domes. The church’s interior is white with charming lighting. Its interior and exterior design was inspired by Roman basilicas, seen in its beautiful white columns and arches.

In 1978, a parish building was attached to the church. It was designed by Inger and Johannes Exner as a fan-shaped attachment with a meeting room, confirmation classrooms and offices. It is connected to the apse by means of a foyer with a glazed roof.

Image by RhinoMind on Wikimedia under Creative Commons License.
Sight description based on wikipedia
4

Aarhus Cathedral, the city’s major religious edifice, is dedicated to the patron saint of sailors, St. Clemens and located on Store Torv (Large Square). It is the largest church in Denmark, at 93 meters long and 96 meters high, seating around 1200 people. Construction began at the end of the 12th century. A number of its frescoes date back to between 1470 and 1520. Until the Reformation, most of its walls were covered in frescoes, many of which were lost, though it still has more than any other church in Denmark. One older painting was saved from the first cathedral, the Lazarus Window, painted around 1300.
Image by Schwarz Weiss on Wikimedia under Creative Commons License.
Sight description based on wikipedia
5

The Church of Our Lady (Vor Frue Kirke), located in the city center, is one of Aarhus’ largest churches. Originally called St. Nicholas' Church, it was expanded by the construction of a Dominican priory in 1240, Vor Frue Kloster (Our Lady's Priory), of which the present church formed the southern wing. After the Reformation its name was changed to the Church of Our Lady and King Christian III decreed that the surrounding buildings, formerly a priory of the Dominicans, should function as a hospital for the sick and poor. The church was subsequently granted congregational privileges which officially made it the center for clerical activities in its area. Between 1250 and 1500 the church was heavily expanded by the addition of, among other things, the large tower. In the 1950s a crypt was rediscovered beneath the church during renovations.
Image by Nico-dk on Wikimedia under Creative Commons License.
Sight description based on wikipedia
6

Sankt Markus Kirke, built in 1935, was designed by Copengen architect Thomas Havning. Inspired by medieval churches, it is reminiscent of Roman basilicas. The church interior is simple, painted white with light wooden pews.
Image by Claus B. Storgaard on Wikimedia under Creative Commons License.
7

Møllevangskirken, consecrated in 1959, was designed by Danish architect C.F. Møller. The elegant 25 meter high tower was built in 1969. The beautiful yellow brick crucifix of the altar was sculpted by Erik Heide.
Image by Nico-dk on Wikimedia under Creative Commons License.
8

Hasle Kirke, built in 1140, contains Romanesque features. The two-story tower with a wooden ceiling was erected in the 16th century and the porch was added in 1872. Worship is held every Sunday at 10:00 am.
Image by Heelgrasper on Wikimedia under Creative Commons License.