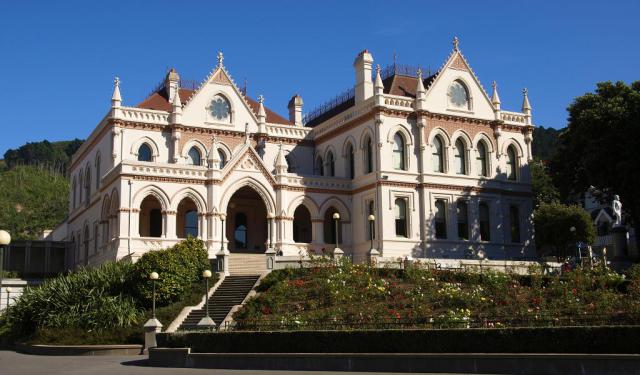 Image by Pear285 on Wikimedia under Creative Commons License.

When immigrants first arrived in New Zealand they brought their beliefs. Most of the first settlers were Christians. The second church built in Wellington, in 1855, still stands today and is a great historic site. This self-guided tour will help you explore the churches and other religious monuments of Wellington.
How it works: Download the app "GPSmyCity: Walks in 1K+ Cities" from iTunes App Store or Google Play to your mobile phone or tablet. The app turns your mobile device into a personal tour guide and its built-in GPS navigation functions guide you from one tour stop to next. The app works offline, so no data plan is needed when traveling abroad.

One of New Zealand’s greatest heritage places, Old St Paul’s was built by the Anglican Church between 1865 and 1866 on what was originally the site of Pipitea Pā, a Māori settlement on Wellington’s waterfront.

Constructed from fine native timbers, the church is a handsome sight from the outside. Inside, it is simply breathtaking. Spectacular lighting gives the interior a rosy glow, enriching the appearance of brass fittings, stained glass windows and exquisitely embroidered furnishings.

As well as being one of the best examples of Gothic Revival architecture in the world, the former cathedral is a repository of many interesting stories, including that of its own survival. Having served the Anglican community up to the 1960s, it was threatened with demolition after the new St Paul’s was built one block away. Saved, restored and reopened to the public, today Old St Paul’s stands not only as a place of spiritual significance and a venue for special events (including weddings and concerts) but also as a reminder of one of New Zealand's great heritage battles.

Opening Hours:
Daily: 10am-4pm (except on some public holidays and for special events)


Image by Michael Coghlan on Wikimedia under Creative Commons License.
Sight description based on wikipedia
2

St Paul's Cathedral is the cathedral church of the Anglican Diocese of Wellington and the seat of its bishop of Wellington.

Work began in 1955, and was completed in 1998. It was constructed in reinforced concrete due to the effects of the 1931 Napier earthquake, making other choices impractical. It began functioning as a cathedral in 1964.

The wooden Lady Chapel is on the "north" side of the cathedral. The Lady Chapel was moved to Wellington Cathedral from its original site in Paraparaumu in 1990.
Image by WCSPMusic on Wikimedia under Creative Commons License.
Sight description based on wikipedia
3

The Metropolitan Cathedral of the Sacred Heart and of Saint Mary His Mother, better known as Sacred Heart Cathedral, is a Roman Catholic cathedral.

The first church to be built on the Hill Street Site was St. Mary's Cathedral, blessed and opened in 1851. It was gutted by fire in 1898, during repainting. Because the Catholic population of Wellington was then mostly based in the Te Aro and Newtown areas, it was decided that a new cathedral should be erected in that part of the city and a 'serviceable church in brick' built on the site of the old cathedral.

However the new church, called the Basilica of the Sacred Heart, was rather grander than this. Its foundation stone was laid in 1899 and the building blessed and opened two years later. The money to build Sacred Heart was taken from the fund for the new cathedral. The new cathedral was never actually built. In 1983 the Basilica was elevated to the status of a cathedral by Cardinal Thomas Williams.
Image by User:Silenceisfoo on Wikimedia under Creative Commons License.
Sight description based on wikipedia
4

St Mary of the Angels is a Catholic church.

The building, is classified as a "Category I" ("places of 'special or outstanding historical or cultural heritage significance or value'") historic place by the New Zealand Historic Places Trust.

The current building was opened in 1922, and is the third church built on the Boulcott Street site.

Architecturally, the design is traditional Gothic of French influence. Also innovative in that it is 'the first occasion ferro-concrete was used for a church of Gothic design'. It is built of reinforced concrete and brick with a timber roof supported by concrete arches with steel tie rods.
Image by Lanma726 on Wikimedia under Creative Commons License.
Sight description based on wikipedia
5

St Peter's Anglican Church was built in 1848. Its highlight is stained glass windows. The church was built from local timber in the Gothic Revival style. It is marked by a corner spire. This big wooden church is a prominent landmark in the inner city of Wellington.
Image by Ian S on Flickr under Creative Commons License.
6

The Greek Orthodox Cathedral of the Annunciation, located on Mount Victoria, was build in the 1940s, it is one of the very few Greek Orthodox churches in Wellington. The distinctive Byzantine-syle domed Greek Orthodox Church - The Annunciation of the Virgin Mary was consecrated in 1970 by Metropolitan Dionysios Psiachas, the first Archbishop of the Holy Metropolis of New Zealand. The current Metropolitan of New Zealand, Bishop Erithron Amfilochios Tsoukos elevated the church on Hania Street to cathedral status. The church is not very big, but is nevertheless a very distinctive landmark.
Image by Geogre on Wikimedia under Creative Commons License.
Sight description based on wikipedia
7

Built in 1932, funded by public donations, the three storied Monastery was constructed as a home for the Redemptorists.
Image by PM on Wikimedia under Creative Commons License.
Sight description based on wikipedia