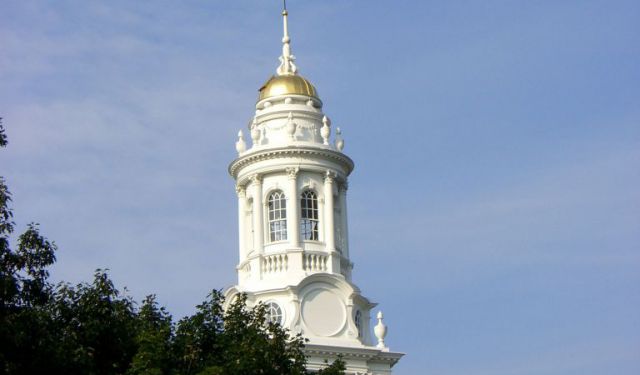 New Haven is home to a number of beautiful churches. While the majority of which feature mostly Gothic style, you can also see examples of Georgian, Federal and Colonial styles of architecture. This self-guided walk takes you to visit the most important churches in downtown New Haven including the three prominent churches next to New Haven Green.
Image Courtesy of Flickr and Aaron Gustafson.
How it works: Download the app "GPSmyCity: Walks in 1K+ Cities" from iTunes App Store or Google Play to your mobile phone or tablet. The app turns your mobile device into a personal tour guide and its built-in GPS navigation functions guide you from one tour stop to next. The app works offline, so no data plan is needed when traveling abroad.

1) Trinity Episcopal Church on the Green

The Trinity Episcopal Church on the Green is an Episcopal church near the New Haven Green Park. The church was founded in 1752 when the Episcopalians decided to have a dedicated place of worship in New Haven. Consecrated in 1816, the Trinity Episcopal Church is among the first Gothic Revival churches and was designed by architect Ithiel Town. Originally built as a small wooden structure with two Gothic tablets in the form of arches, today the church is a concrete piece with an impressive Gothic tower.
Image Courtesy of Flickr and JERRY DOUGHERTY.
2

2) Center Church on the Green

The Center Church of the Green, also known as The First Church of Christ (United Church of Christ / Congregational), is the middle church of the three located just near the New Haven Green Park. It was established in 1639. The present Georgian-style building was constructed in 1812, designed by architect Ithiel Town.

The church is famous for housing The Crypt, located in its basement, containing the identified remains of about 137 people, plus another 1,000+ of the unidentified ones, with gravestones dating back to 1687-1812, which is one of the rare colonial burial grounds preserved intact. The oldest dated stone there (1687) is that of Sarah Rutherford Trowbridge.

*** Amistad Freedom Trail ***
Back in the mid-19th century, this church congregation was actively involved in supporting the Mende African captives during the Amistad incident and were particularly instrumental in gaining support for the Africans held in the New Haven Jail.


Image Courtesy of Wikimedia and Farragutful.
Sight description based on Wikipedia.
3

3) United Church on the Green

Originally known as the North Church, the United Church on the Green is the third of the three New Haven Green Park churches. It was constructed in 1814 in a Federal style by architect David Hoadley. In 1884, it merged with Third Church to create a United Church.

The United Church on the Green features tall white columns in combination with brick walls, thus creating an impressive sight. The steeple of the church has served as a model for other church steeples in the U.S. Another prominent feature of this temple is a pipe organ.

*** Amistad Freedom Trail ***
Several members of both congregations were ardent abolitionists and played an active role in assisting New Haven’s free black community. Among them were the Reverend Samuel Dutton, Nathaniel and Simeon Jocelyn, who was one of the three founding members of the Amistad Committee formed to raise a defense for the Amistad captives, as well as Roger Sherman Baldwin, member of North Church and a New Haven attorney, who offered legal services to the Mende African captives. After the captives were freed, the Amistad Committee arranged for their return to Africa. Commemorating that event is a memorial plaque inside the church.
Image Courtesy of Flickr and Daniel Hershman / www.hershmanphoto.com.
4

The church building, completed in 1898, was designed by architect Henry Vaughan. It is notable for its very fine Gothic architecture, and its central location near downtown New Haven makes it something of a landmark. Its stone tower is modeled on the tower of Magdalen College, Oxford. Vaughn personally chose the artists who created the beautiful interior. Bavarian-born Johannes Kirchmayer executed the intricate wood carving, notable in particular on the rood screen. The stained glass windows (including a large window at the back of the sanctuary above the baptismal font) were created by the noted firm of C.E. Kempe in London. The high altar also features monmunental stone figures and a carved Caen stone reredos inspired by examples in Winchester Cathedral and St. Alban's in England.
Image Courtesy of Wikimedia and Delcio GP Filho.
Sight description based on Wikipedia.
6

The Church of St. Mary is the parish church of the second oldest Roman Catholic parish in Connecticut. The parish was established in 1832. The Knights of Columbus was founded here in 1882 by Father Michael J. McGivney, who was then the church's assistant pastor. The church is currently run by friars of the Dominican Order. The first church was built in 1834. It burned down in 1848. The current church at 5 Hillhouse Avenue was dedicated in 1874. It was designed by the eminent architect James Murphy of Providence, Rhode Island.
Image Courtesy of Wikimedia and Eumenes12.
Sight description based on Wikipedia.