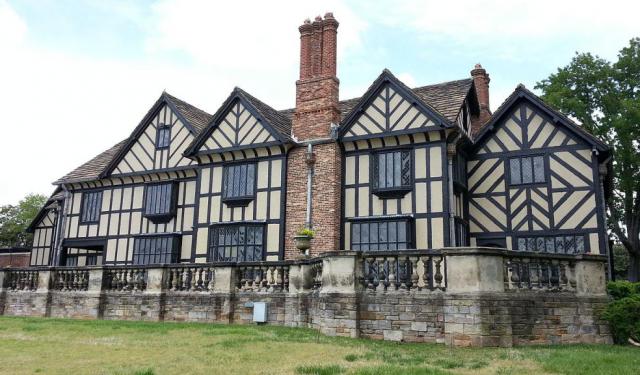 Being one of America’s oldest major cities, the capital of Virginia, Richmond is rich with historic homes that preserve the local heritage and beauty. Those passionate about history and culture, will surely find plenty to their taste here. This walk is Part Two of the self-guided tour of Richmond's Historical Homes, and it continues to introduce you to some of the city's most prominent mansions, dating back to the 1800s and beyond.
Image Courtesy of Wikimedia and Fopseh.
How it works: Download the app "GPSmyCity: Walks in 1K+ Cities" from iTunes App Store or Google Play to your mobile phone or tablet. The app turns your mobile device into a personal tour guide and its built-in GPS navigation functions guide you from one tour stop to next. The app works offline, so no data plan is needed when traveling abroad.

Columbia, also known as the Philip Haxall House, is a historic home located in Richmond. A rare surviving hi-style Federal Villa. The house name is derived from the Columbia Flour Mills which Haxall operated. It was built in 1817–1818, and is a two-story, three bay Federal style brick dwelling on a high basement.

The entrance features an elliptical fanlight opening sheltered by a one-story Doric porch. It was added when the entrance was moved from the Lombardy Street side to the Grace Street side in 1924, when the building was expanded to house the T.C. Williams School of Law of the University of Richmond. In 1834 the Baptist Education Society purchased the house and it became the main academic building of Richmond College, later University of Richmond. It housed the School of Law from 1917 to 1954. In 1984 Columbia was purchased by the American Historical Foundation for its headquarters.

It was listed on the National Register of Historic Places in 1982.

Image Courtesy of Wikimedia and Morgan Riley.
Sight description based on Wikipedia.
2

Branch House was thus elevated to the National Register because it was designed by one of the country's prominent architectural firms during the early 20th century because it is the only example of the firm's Tudor-Jacobean Revival residences in which the interiors have survived intact. In addition, the house is located within a historic district of cultural significance and is the largest house in the city of Richmond.

Branch House also accurately reflects a particular period of American history, in the early decades of the twentieth century, when English architectural styles were fashionable among wealthy industrialists and financiers. The client was also scion to a distinguished Virginia family and had assembled a substantial collection of Renaissance artifacts.

Image Courtesy of Flickr and Brett.
Sight description based on Wikipedia.
3

Virginia House is a manor house on a hillside overlooking the James River in the Windsor Farms neighborhood of Richmond.

The house was constructed from the materials of the 16th-century Warwick Priory in Warwickshire, England, and shipped over and reassembled, completed several months before the stock market crash of 1929. Virginia House is in the Tudor architectural style but incorporates a range of designs from other English houses and has modern facilities such as ten baths and central heating.

Virginia House was built by Alexander and Virginia Weddell, salvaging many materials from the Priory and other old English manor houses and adding further elegant English and Spanish antiques, oriental carpets, silks, and silver. Today Virginia House is operated by the Virginia Historical Society as a house museum, although it largely remains as it was in the 1940s during the Weddells’ tenancy.
Image Courtesy of Jennifer M. Guild.
Sight description based on Wikipedia.
4

Agecroft Hall is a Tudor manor house and estate located on the James River in the Windsor Farms neighborhood of Richmond. The manor house was built in the late 15th century, and was originally located in the Irwell Valley at Agecroft, Pendlebury, then in the historic county of Lancashire, England, but by the 20th century it was unoccupied and in a state of disrepair.

Mr. Thomas C. Williams, Jr. of Richmond, Virginia, a wealthy entrepreneur, purchased Agecroft Hall. During the Country Place Era, when many wealthy American families were building extensive country estates emulating those they had seen in Europe, Mr. Williams, whose business interests included tobacco, banking and shipping wished to build a true English manor house on his 23-acre estate overlooking the James River. The manor house was dismantled, crated, transported across the Atlantic, and reconstructed in Richmond's Windsor Farms neighborhood - then a fashionable new neighborhood being developed by Mr. Williams on the Williams' family farm site, which had long been known as 'Windsor.'

The intention was not to replicate Agecroft as it had stood in Lancashire, but rather to create a functional and comfortable mansion reminiscent of its English predecessor. The original floor plan was abandoned and many 20th century conveniences were included. The project was completed during the spring of 1928.

The following year Mr. Williams died, having stipulated in his will that upon his widow's death or relocation, Agecroft Hall would become a house museum.

Today this historic English manor house is a top attraction in Richmond. Both the interior and its garden are open year round for guided and self-guided tours and special events. Here you can see what a 16th century wealthy English family lived like without leaving the US.