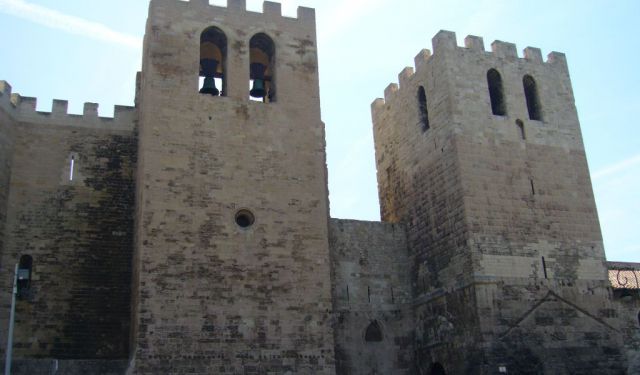 Image by Abderitestatos on Wikimedia under Creative Commons License.

As Marseilles is the oldest city in France, it has a lot to offer visitors interested in history. It has many ancient buildings and churches of historical interest. All of these ancient buildings are very popular among tourists and have a rich history. Don't miss the chance to visit some of its most interesting constructions.
How it works: Download the app "GPSmyCity: Walks in 1K+ Cities" from iTunes App Store or Google Play to your mobile phone or tablet. The app turns your mobile device into a personal tour guide and its built-in GPS navigation functions guide you from one tour stop to next. The app works offline, so no data plan is needed when traveling abroad.

One of the most impressive buildings in Marseille, Palais du Pharo was built in the 19th century as Napoleon III's waterfront residence. It stands on a hill overlooking the Château d’If and the entrance to Vieux-Port. Today this high-class architecture, one of the most beautiful in Europe, serves as a conference center that receives up to 60,000 people every year.
Image by Georges Seguin (Okki) on Wikimedia under Creative Commons License.
Sight description based on wikipedia
2

This star-shaped fort was built in 1680. At that time Marseille's independence was finally lost and Louis XIV needed to keep an eye on the rebellious citizens. Today this grand building is home to the Foreign Legion.
Image by Rvalette on Wikimedia under Creative Commons License.
3


Image by Tanya Dedyukhina on Wikimedia under Creative Commons License.
Sight description based on wikipedia
4

The Grand-Théâtre was designed by the three architects Ebrard, Castel, and Raymond. Many well-known contemporary singers made their French debuts in this opera house. Among them are Alfredo Kraus, Plácido Domingo, and Renata Scotto. Past music directors of the company have included János Fürst. After World War II the Marseille opera house staged Sigurd by Ernest Reyer in 1963 and 1995.
Image by Jeanne Menjoulet on Flickr under Creative Commons License.
Sight description based on wikipedia
5

Hôtel de Cabre is considered the oldest house in Marseille. It was built in 1535. It was partially destroyed in 1943 due to fire, but was later extensively renovated.
Image by Robert Valette on Wikimedia under Creative Commons License.
Sight description based on wikipedia
6

The ‘Diamond House’ was built in 1570. It is named so because of the diamond-shaped reliefs that decorate its outer facade. The museum represents a testament to life in Marseille during the 18th and 19th centuries, and presents a comprehensive exhibit dedicated to the Plague of 1720.
Image by Robert Valette on Wikimedia under Creative Commons License.
Sight description based on wikipedia
7

During World War II Fort Saint-Jean was occupied by the German military in November 1942. In August 1944 during the liberation of Marseilles, the explosion of a munitions depot within the fort destroyed much of its historic battlements and buildings. Classified as a historical monument in 1964, the damaged portions of the fort were reconstructed between 1967 and 1971. It now houses the Museum of European and Mediterranean Civilizations.
Image by decar66 on Flickr under Creative Commons License.
Sight description based on wikipedia
8

A former almshouse, now functioning as a museum and cultural center, La Vieille Charité is situated in the heart of the old Panier quarter of Marseille. Constructed between 1671 and 1749 in the Baroque style to the designs of the architect Pierre Puget, it comprises four ranges of arcaded galleries in three storeys surrounding a space with a central chapel surmounted by an ovoid dome. The main body of the structure is a rectangle, 112m by 96m, composed of four walls in pink and yellow-tinted molasse stone from the ancient quarries at Cap Couronne, with no outward facing windows. On the inside are three arcaded galleries superposed on each other, opening onto an interior courtyard measuring 82m by 45m.

Spared during the French Revolution, the building was used as an asylum for vagrants and the dispossessed in the 19th century. It was transformed into a barracks for the French Foreign Legion until 1922 when it was used to lodge those displaced by the demolition of the district behind the Bourse and later those made homeless by the dynamiting of the Old Port during the Second World War. In 1962 all the residents were rehoused and the building shut down. It was only in 1968, thanks to the intervention of the Minister of Culture André Malraux, that funds became available to rescue the buildings. La Vieille Charité was restored between 1970 and 1986, restoration of the chapel being completed in 1981.