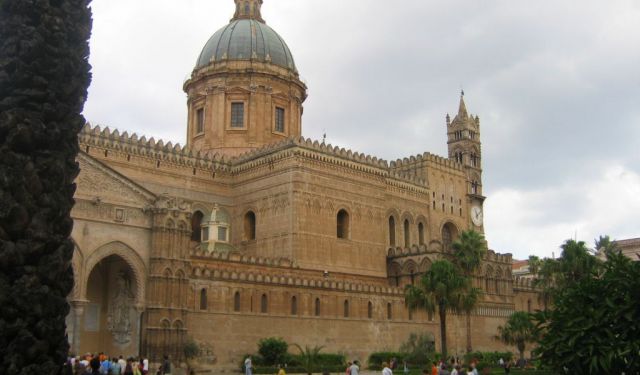 Image by Urban on Wikimedia under Creative Commons License.

Religion is central to the culture of Italy. Thus, the city of Palermo features a wide variety of religious institutions including churches, cathedrals, and temples. Journey down the part two of Palermo's religious buildings tour and enjoy the sights.
How it works: Download the app "GPSmyCity: Walks in 1K+ Cities" from iTunes App Store or Google Play to your mobile phone or tablet. The app turns your mobile device into a personal tour guide and its built-in GPS navigation functions guide you from one tour stop to next. The app works offline, so no data plan is needed when traveling abroad.

1) Cathedral of Palermo (must see)

Image by vic15 on Flickr under Creative Commons License.
Sight description based on wikipedia
2

Image by Motivase on Flickr under Creative Commons License.
Sight description based on wikipedia
4

Chiese Cattoliche Parrocchiali S. Nicolo' Da Tolentino is situated in the very heart of Palermo's historic center. The cattoliche served as a shelter for poor priests for numerous centuries; since 1866 it has been used as the provisional seat for many other institutions including Chamber of Commerce and Notarial Archives.
Image by Carson Coots on Flickr under Creative Commons License.
5

San Cataldo is a church linked to the Santa Maria dell' Ammiraglio church. It was founded in 1160 and is a bright example of Norman architecture. It served as a post office during the 18th century, but now it is restored and ready for religious service.
Image by Allie_Caulfield on Flickr under Creative Commons License.
6

La Martorana or Santa Maria dell' Ammiraglio is a chapel located in Piazza Bellini. It was built in 1143 and is known for its amazing gold Byzantium mosaics. This is probably one of the most beautiful churches in Palermo, having an exterior that displays Norman architecture, Gothic towers and Baroque facades.
Image by Bjs on Wikimedia under Creative Commons License.
7

Chiesa di Sant'Anna la Misericordia was designed by Mariano Smiriglio and erected in a late Renaissance style (built in 1639). Unfortunately, the church was severely damaged by an earthquake in the year 1726. The facade has since been renovated by architect Giovanni Biagio Amico.
Image by Balarm on Wikimedia under Creative Commons License.
8