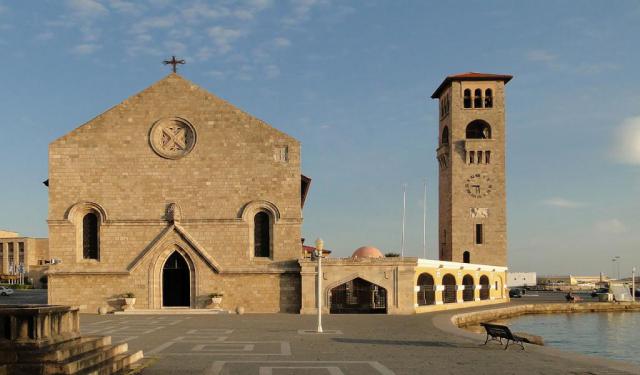 Rhodes has a great variety of religious buildings, many of which date back centuries. Mosques, Catholic churches, synagogues-- these places of worship have beautiful architecture and historic significance, in addition of offering religious services. Because of the close proximity to Turkey (18km), Rhodes is home to many mosques; fourteen of them are located in the old part of the city. Take this tour to discover the most noteworthy places of worship in Rhodes.
How it works: Download the app "GPSmyCity: Walks in 1K+ Cities" from iTunes App Store or Google Play to your mobile phone or tablet. The app turns your mobile device into a personal tour guide and its built-in GPS navigation functions guide you from one tour stop to next. The app works offline, so no data plan is needed when traveling abroad.

The Mosque of Suleiman in Rhodes is an immense pink-colored mosque that was built by the sultan in 1522 to celebrate the victory of the Turkish over the Knights Hospitallers. The Knights had established themselves in Rhodes in 1307 and their possession of the island was confirmed by Pope Clement V in 1309. The newly crowned Ottoman sultan Suleilman, however, led naval attacks on Rhodes and the vastly outnumbered Knights fled, taking only what they could carry. As many conquerors are wont to do, this huge religious site was built over the remains of the destroyed Christian Church of the Apostles and it is the largest of all the mosques in Rhodes.

The building was re-constructed in 1808, following damage, and its striking minaret sadly had to be removed in 1989, as it was deemed unsafe. However, to this day the rose colored stone exterior and classic Ottoman style is striking and adds significantly to the ambiance of the Old City. The Mosque of Suleiman remains one of the major landmarks of the city of Rhodes. Although it is currently closed to visitors, pending restoration, you can appreciate its design from the street. The mosque is conveniently located right across from the old Turkish Bazaar.

Image by Ron McWhorter on Flickr under Creative Commons License.
2

The Mustafa Mosque is located near the Turkish Bath on Platia Arionos in the Turkish quarter of Rhodes. The beautiful mosque was built by Sultan Mustafa III in 1765. The sultan was very religious and built many mosques during his time. Be sure to check out this historic and religious site.
Image by Nikater on Wikimedia under Creative Commons License.
3

The Rejep Pasha Mosque is one of the 14 mosques in Rhodes’ Old City, but it is considered historically important as one of the earliest examples of the Ottoman influence on the island. Constructed in 1588 from the remains of destroyed churches, it is best known for containing the tomb of Rejep Pasha. It also features impressive minarets, a dome, mosaics and a stunning fountain. The mosque had recently been reinforced to strengthen the ageing foundations; however it has also suffered recent collapses, which have extensively damaged the Colonnade, extending from the Prayer Hall, and placed pressure on the entire structure. Approximately 3 million Euros are needed in order to fully restore the dazzling structure.

Following a possible restoration, there have been plans to turn it into a museum for Islamic art. Indeed, the mosque is known to have a great deal of impressive Islamic art within its walls. The future of the iconic and historically significant mosque is up in the air, following collapses and lack of funding. Without extensive reparations it may not be around for much longer and its future depends on significant restoration and structural renovations.

Image by Michael Alifanz on Flickr under Creative Commons License.
4

The Kahal Shalom Synagogue is a Sephardic Jewish synagogue located in the Jewish Quarter of the city. There have been Jewish people in Rhodes for more than two millennia and, although they were often persecuted under the Romans and Knights of Rhodes, they enjoyed peace and prosperity under Ottoman rule and this encouraged even more Sephardic Jews to settle here. Built in 1577, the Kahal Shalom is Greece’s oldest surviving and continuously used synagogue. However, much of the local Jewish community emigrated following the Italian take over the Dodecanese Islands in 1912, especially during the fascist era.

The layout of the building is typical of most Sephardic synagogues with the Tevah, where the Torah is read, in the center of the sanctuary. The striking floor of the interior space is a mosaic made of black and white local stones and there are two unusual Torah arks on each side of the interior courtyard. There are several plaques relating to the history of the Jewish community, adorning the walls of the interior and exterior of the synagogue in Ladino, the Sephardic language, Hebrew and even French. There is a museum attached to the synagogue, which highlights the history of the Jewish people in Rhodes - the complex also often used for community events.

Image by NYC2TLV on Wikimedia under Creative Commons License.
5

5) Church of Our Lady of the Castle (must see)

The Church of Our Lady of the Castle is a Byzantine gem and one of Rhodes most popular attractions. Built sometime in the 11th century, it was used as the Orthodox Cathedral of Rhodes under Byzantine rule and the Latin Cathedral under the Franks. In addition to the Byzantine features, there are also some Gothic elements that were added at a later date. When the Ottomans took over Rhodes from the Knights, the church was converted into a mosque, but fortunately, the original design of the construction was maintained. During Ottoman rule, it was called the Enterum Mosque and the bell tower was converted into a minaret.

During Byzantine times, the church was a single domed and one-aisled structure. It was later expanded, under the tutelage of the Knights of Hospitaller, and the noteworthy bell tower was added. In the 14th century, a monastery was added to the church grounds. Within the grounds of the church there are also the remains of a Doric Temple of Athena Polias – this fascinating site features intricate carvings and should not be missed. The interior of the church has many frescoes and paintings that are hundreds of years old and which pertain to different eras of its patronage.
Image by anna welch on Flickr under Creative Commons License.
6

Evangelismos Church (also called The Church of the Annunciation) is located next to Mandraki Harbor. It was built in 1925 by the Italians, as Rhodes was an Italian city at that time. The church is a magnificent example of Gothic architecture. It is similar in design to St. John Church located in Old Town. This church is also dedicated to St. John. The interior is decorated with murals by Fotis Kontoglou.
Image by Magdalena Siudy on Wikimedia under Creative Commons License.
7

7) Church of Our Lady of Victory

The Church of Our Lady of Victory is known locally as Sancta Maria and has a long and turbulent history on Rhodes. The church existed during the reign of the Knights over the island and was run by the Franciscans, but following the victory of the Ottoman Empire, in 1522, they were forced to leave and the original church was destroyed. In 1719, their mission on Rhodes was allowed to return and in 1743, the Church of Our Lady of Victory was rebuilt in its current location. In 1851, the church underwent significant expansion and it was made the main Catholic Church on Rhodes.

Following an earthquake in 1926 the Belltower collapsed and plans were forged to construct a new façade. The renovations were completed in 1929 and the Baroque Portal was replaced by a new wrought iron gate brought from Emilia-Romagna in Italy. The façade now features elements of the church’s crusader origins as well as a Maltese cross. Inside the church there is a single nave and transept along with three cross vaults and a cupola that is crowned with a lantern. In 1937 Rhodian marble was added to the frontal of the main altar.
Image by Philip Tapp on Flickr under Creative Commons License.