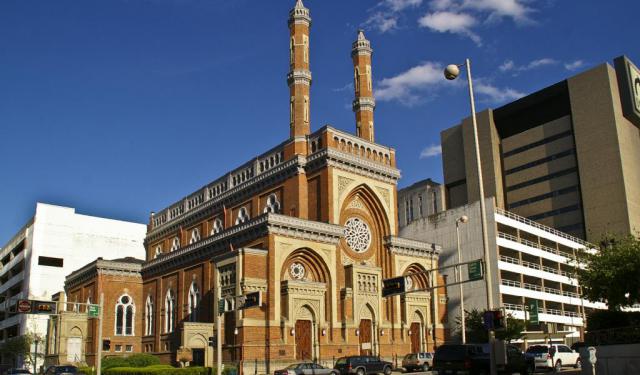 Cincinnati is known as "The Paris of America" due to the architectural and historical significance of many of its parishes. Cincinnati possesses some fine examples of churches built after World War II. Take a couple of hours on this tour to discover the beauty of Cincinnati's churches and cathedrals.
How it works: Download the app "GPSmyCity: Walks in 1K+ Cities" from iTunes App Store or Google Play to your mobile phone or tablet. The app turns your mobile device into a personal tour guide and its built-in GPS navigation functions guide you from one tour stop to next. The app works offline, so no data plan is needed when traveling abroad.

St. Louis Church is located downtown at Walnut Street and 29 East Eighth Street. The church, designed in the Florentine style, is a five-story limestone building with two chapels. The current church was built in 1930 on the former site of St. Ludwig Kirche, a Roman Catholic church that was initially built in 1870 for a Christian sect known as the Campellites. St. Louis Church offers Roman Catholic services.
Image by Tom Bastin on Flickr under Creative Commons License.
2

Saint Peter in Chains Cathedral is the cathedral of the Roman Catholic Archdiocese of Cincinnati. It is a Greek Revival structure located at 8th and Plum Streets in downtown Cincinnati. The cornerstone of Saint Peter in Chains was laid on May 20, 1841, under the direction of then-bishop — later archbishop — John Baptist Purcell, and formally dedicated on November 2, 1845. Its striking single spire, which soars 220 feet above street level, was the tallest man-made structure in the city for many decades. The interior of Saint Peter in Chains is distinctly unique among Roman Catholic cathedrals in America, with its Greek-themed mosaics depicting the Stations of the Cross, its ornate Corinthian columns and its massive bronze doors. The cathedral is a popular venue for weddings.
Image by Greg Hume on Wikimedia under Creative Commons License.
Sight description based on wikipedia
3

The Isaac M. Wise Temple (formerly the Plum Street Temple) is the historic synagogue erected for Rabbi Isaac Mayer Wise. Rabbi Wise was the founder of American Reform Judaism. The temple is located at 720 Plum Street and was built by members of the Lodge Street Synagogue. The temple was dedicated on Friday, August 24, 1866 and is among the oldest synagogue buildings still standing in the United States. This building was designed by James Keys Wilson and blends the Neo-Byzantine and Moorish Revival styles of architecture. The temple has a tripartite facade, rose window and a basilica style arch, similar to a Gothic Cathedral, yet Islamic influences are visible in its minarets and other architectural details.
Image by Lanskeith17 on Wikimedia under Creative Commons License.
Sight description based on wikipedia
4

The church building is a rectangular two-story structure facing to the east. Worshippers enter through doors in a prominent tower that occupies the center of the façade. Such a tower is characteristic of the German Gothic churches that this church was built to emulate, as are the transepts on either side of the tower. In 1973, the church was listed on the National Register of Historic Places because of its place in local history and because of its distinctive and well-preserved historic architecture. Ten years later, most of Over-the-Rhine was added to the Register as a historic district, and the Apostolic Bethlehem Temple Church qualified as one of its hundreds of contributing properties.

Image by Greg5030 on Wikimedia under Creative Commons License.
Sight description based on wikipedia
5

First Lutheran Church is located in downtown Cincinnati on Race Street. This historic church was first established in 1814 by a group of German Protestants and was constructed in 1895 by the architectural firm Charles Crapsey & W.R. Brown in the Romanesque Revival style. The church features a large Gothic window and a 130-foot-tall tower.
Image by Pompeo Batoni on Wikimedia under Creative Commons License.
6

Old St. Mary's Church is a parish church of the Roman Catholic Archdiocese of Cincinnati in the United States. It is located at 123 E. Thirteenth Street in the Over-the-Rhine neighborhood. This Roman Catholic parish was organized in 1840 by German immigrants.

Designed in the Greek Revival style by Franz Ignatz Erd, it is the second-oldest German-Catholic parish in the city and the oldest standing church in Cincinnati. The church is 142 feet long, 66 feet wide and with a steeple 170 feet tall. The "Old" was added in 1904 when St. Mary's in Hyde Park was founded. The parish, which today draws parishioners from some 50 different zip codes, practices the rich liturgical, musical and cultural heritage of the Roman Catholic tradition. The Church offers Masses in Latin, German and English every Sunday. The Latin Mass features a Gregorian chant choir.

Image by Adam Sonnett on Wikimedia under Creative Commons License.
Sight description based on wikipedia
7

St. Francis Seraph Church is a Roman Catholic parish in Cincinnati. It was established in 1859 by the Franciscan Friars of the Province of St. John the Baptist on the former site of the first Catholic church in Cincinnati, Christ Church. Its name comes from St. Francis of Assisi, the founder of the Franciscan order. St. Francis had a vision of a six-winged angel, or seraph, for which the church is also named.
Image by fradaveccs on Flickr under Creative Commons License.
Sight description based on wikipedia
8

Philippus United Church of Christ is located on the northwest corner of West Mcmicken and Ohio Avenues, in the Over-the-Rhine neighborhood, in Cincinnati. The church is a landmark because of a gilded hand, with its index finger pointing to the heavens, on its tall steeple. The church is an outgrowth of the now defunct St. Matthews German Evangelical Church at Elm and Liberty Streets, which was a stronghold of Free Protestantism.

Philippus Church is a red brick church completed in 1891. The church features Gothic Revival-style details. Recessed pointed-arch windows flank the gabled pointed-arch entrance and projecting tower with its rose window. For many years Phillippus Kirche ministered to Cincinnati's German immigrants and their families under the direction of the Rev. Dr. Pister. All services were conducted in German until 1921. Following the union of the Evangelical and Reformed Church in 1933, Philippus Kirche assumed the name Philippus Evangelical and Reformed Church. Since 1957 the church has been an active part of the United Church of Christ. The Rev. Cherie Hambleton is the current pastor of Philippus United Church of Christ.

Image by Yashna M on Flickr under Creative Commons License.
Sight description based on wikipedia