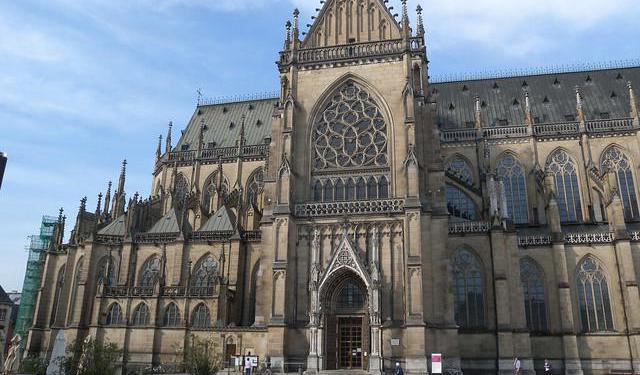 Image by Tauralbus on Flickr under Creative Commons License.

Linz is home to some of Europe’s oldest churches. Besides being historic sites, most of them are beautiful architectural pieces. The following tour highlights the most significant and spectacular religious buildings in Linz.
How it works: Download the app "GPSmyCity: Walks in 1K+ Cities" from iTunes App Store or Google Play to your mobile phone or tablet. The app turns your mobile device into a personal tour guide and its built-in GPS navigation functions guide you from one tour stop to next. The app works offline, so no data plan is needed when traveling abroad.

The building of the New Cathedral, also known as the Cathedral of the Immaculate Conception, in Linz was begun in 1855 by Bishop Franz-Josef Rudigier. The first stone was laid in 1862. With 20,000 seats, the cathedral is the largest, but not the highest, church in Austria. The originally-planned, higher spire was not approved, because in Austria-Hungary at the time, no building was allowed to be taller than the South Tower of the St. Stephen's Cathedral in Vienna. At 135 m, the New Cathedral is two meters shorter than the Viennese cathedral.

Particularly noteworthy are the cathedral's stained-glass windows. The most famous is the Linz Window, which depicts the history of Linz. The windows also contain portraits of the various sponsors of the church's construction. During the Second World War some windows, particularly in the southern part of the cathedral, have been damaged. Instead of restoring the original windows, they have been replaced with windows displaying modern art. Also noteworthy is the nativity scene in the church burial vault, with its figures made by S. Osterrieder, and the display of the regalia of Bishop Rudigier.

Image by H. Raab on Wikimedia under Creative Commons License.
Sight description based on wikipedia
2

Ursulinenkirche, built between 1736 and 1772, was designed by notable architects Johann Haslinger and J.M. Krinner. Its interior is adorned with sculptures and other works by famous artists such as Bartolomeo Altomonte, Antonio Belucci and Martin Altomonte. A notable later addition to this beautiful church is its Baroque facade.
Image by Michael Kranewitter on Wikimedia under Creative Commons License.
3

Carmelite Church, next door to Ursulinenkirche on Landstraße Street, is a beautifully ornate building established in 1674. Modeled after the Franz-Josef Church in Prague, its interior decorated with altarpieces by Carlo Carlone, Martin Altomonte, J.A. Wolf and Carl von Reslfeld is particularly worth seeing.
Image by Extrawurst on Wikimedia under Creative Commons License.
4

Seminarkirche, a small church built between 1718 and 1725, contains work by famous artists, including Paolo d'Allio, Hildebrandt, Martin Altomonte and Joseph Schmidt. Architectural details such as the wooden doors, the marble portal and the black cross above the front door are remnants of the Order of German Knights, dissolved in 1785, after which the church became property of the seminary.
Image by Extrawurst on Wikimedia under Creative Commons License.
5

Stadtpfarrkirche, located near Hauptplatz, is a Romanesque building with Gothic elements. One of the oldest churches in the city, dating back to 1286, in 1648 the church was transformed into a Baroque structure. Be sure not to miss the famous statue of St. John of Nepomuk by Georg Raphael Donner from 1727 and the altarpiece depicting the Assumption of Mary into heaven by Johann Karl von Reslfeld.
Image by Anneli Salo on Wikimedia under Creative Commons License.
6

Designed by Pietro Francesco Carlone, Ignatiuskirche, also known as the Old Cathedral, was built between 1669 and 1678. From 1785 to 1909 it served as the Cathedral of the Diocese of Linz. This single-nave Baroque church has lateral chapels and galleries, as well as a closed choir and stucco work by J.P. Spaz and G.B. Mazza. The marble high altar by Colomba and Barberini with a picture by Antonio Bellucci and the Aloisian altarpiece by Bartolomeo Altomonte are particularly noteworthy. The choir pews originate from the former monastery church in Garsten, while the organ by Franz Xaver Krismann comes from Engelzell Monastery. From 1856 to 1868 famous composer Anton Bruckner served as its organist.
Image by Michael Kranewitter on Wikimedia under Creative Commons License.
Sight description based on wikipedia
7

Minoritenkirche (Church of the Minor Friars) is one of Linz’s most remarkable churches. The main structure dates back to 1236 and was rebuilt several times, including a Rococo transformation in 1751. Be sure to check out its spacious interior, beautiful furniture and an impressive reproduction of Da Vinci's Last Supper.
Image by Douglas Sprott on Flickr under Creative Commons License.
8

Martinskirche, first mentioned in 799, is Linz’s oldest church, though no one knows for sure when this beautiful church was built. Particularly noteworthy is its Carolingian architecture and Romanesque and Gothic door and window arches.
Image by Gerhard Anzinger on Wikimedia under Creative Commons License.

A provincial center in the Holy Roman Empire, founded by the Romans in the 8th century AD, the city of Linz breathes history. Closely associated with many historic figures of arts and politics – the likes of Wolfang Amadeus Mozart, Anton Bruckner, Habsburg Emperor Friedrich III and infamously Adolf Hitler lived here at the time – the city abounds in fascinating sites and attractions of great...  view more

Linz, the capital of Upper Austria, is one of the most beautiful cities in the country. You will find a host of historic sites, great architecture, cultural venues and modern touches here. The best way to absorb the culture of this city is to visit its museums. Take the following tour to discover the great museums Linz has to offer.