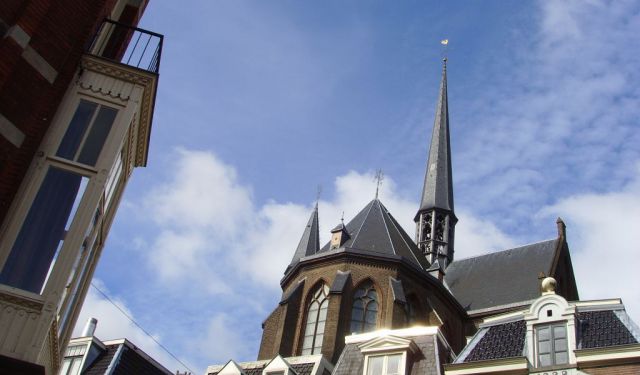 Image by Luctor on Wikimedia under Creative Commons License.

Utrecht’s religious buildings will amaze you with their beauty, design and fascinating history. Some of them, such as Jacobikerk or Sint-Gertrudiskathedraal, are of interest for their role in the Dutch Reformation, which influenced the city’s spiritual life in many ways. Take the following tour to discover the best holy buildings Utrecht has to offer.
How it works: Download the app "GPSmyCity: Walks in 1K+ Cities" from iTunes App Store or Google Play to your mobile phone or tablet. The app turns your mobile device into a personal tour guide and its built-in GPS navigation functions guide you from one tour stop to next. The app works offline, so no data plan is needed when traveling abroad.

Sint-Willibrordkerk is a Roman Catholic church built in 1875 under the direction of a group of priests. Its general design, by Alfred Tepe, is a conservative variant of the Gothic Revival style, with a focus on the late Gothic period, the Lower Rhine Gothic style in particular. Made entirely of brick, one of its main attractions is its interior, where the original woodwork and glass design remain almost entirely intact to this day.
Image by pepijntje on Wikimedia under Creative Commons License.
2

Janskerk, founded in 1040 by Bishop Bernold, is dedicated to John the Baptist. In the Middle Ages it was one of Utrecht’s five collegiate churches. Over the centuries it has undergone major renovations, gradually transforming from the Romanesque style into the present late-Gothic. It served as the university library from 1656 until 1821. Its interior is dominated by the Gothic tomb of Dirk Wassenaer and a massive Batz organ. Each Sunday the church holds ecumenical services for university students.
Image by Mauritsvink on Wikimedia under Creative Commons License.
3

Sint-Augustinuskerk was the first Roman Catholic church built after the Dutch Reformation. Designed in the Classical Revival style, the tower belfry is a Gothic design. Its peaceful interior is an undivided neo-Baroque space with richly adorned stucco and Classical capitals on the columns and pilasters.
Image by T Houdijk on Wikimedia under Creative Commons License.
4

The Jacobikerk is a landmark Protestant church in Utrecht. The building is located on the St Jacobsstraat, named for its patron saint St. James the Greater. The church is one of the medieval parish churches of Utrecht, along with the Buurkerk, the Nicolaïkerk and the Geertekerk.

Today it is known as the starting place for Dutch pilgrims on their way to Santiago de Compostella along the Way of St. James. The Dutch Confraternity of St. James is located around the corner on the St. Jacobskerkhof.

The current gothic church dates from the end of the 13th century, but was expanded in the 14th and 15th centuries.

The church is still used on Sundays as a church but can be rented it out the rest of the week for other functions, including weddings and concerts, but also various cultural initiatives of the city or the local university.

Image by Pepijntje on Wikimedia under Creative Commons License.
Sight description based on wikipedia
5

Westerkerk, located on Catharijnekade, was built in 1891 by AW van Beeck Calkoen and designed by draft master carpenter H. van Dijk. Designed in an eclectic style with neoclassical elements, one of its most prominent features is the organ, which has acquired the status of a national monument.
Image by Brbbl on Wikimedia under Creative Commons License.
6

Sint-Gertrudiskathedraal, constructed in the late 1920s as the seat of the Archbishop of Utrecht, was built in a neo-Romanesque style on the site of a former smaller church with a similar design. Its main façade features stone-washed brick laying and two side towers. The church is known for having a close relationship with the Church of England.
Image by pepijntje on Wikimedia under Creative Commons License.
7

St. Martin's Cathedral, or Dom Church (Domkerk) was the cathedral of the Diocese of Utrecht during the Middle Ages. Once the country's largest church and only cathedral, dedicated to Saint Martin of Tours, it has been a Protestant church since 1580. This is the only church in the Netherlands that closely resembles the classic Gothic style as developed in France, every other church was designed in one of the many regional variants. Unlike most of its French predecessors, it has only one tower, Dom Tower, which is the hallmark of the city.
Image by Jensbn on Wikimedia under Creative Commons License.
Sight description based on wikipedia
8

Lutherse Kerk (Lutheran Church), according to the city records, was originally the chapel of the nunnery of St. Ursula's. Founded in 1412 by wealthy city resident Abraham Dole, over the centuries it has been used for multiple purposes. In 1743 the Lutheran community acquired the church. Nowadays it offers services in Dutch, German, Latin and English.
Image by Brbbl on Wikimedia under Creative Commons License.
9

Sint-Catharinakathedraal (St. Catherine's Cathedral) was originally part of the Carmelite Friary, established in 1465. The present church was initiated by the Knights Hospitalers, and completed in the 16th century, with a façade bearing a remarkable resemblance to the former church located on this site. For over two centuries Protestant services were offered here, until 1840 when it returned to Catholicism, becoming the cathedral of the Archbishopric of Utrecht in 1853.
Image by Fruggo on Wikimedia under Creative Commons License.
10

Nicolaïkerk, built in the early 12th century, is one of Utrecht’s four medieval parish churches. A blend of Romanesque and late Gothic styles, during the Dutch Reformation many of its Catholic elements were removed and it became a Protestant church. Today, this wonderful church is well-known for its beautiful interior and great organ.
Image by Jan Hendrick Verheijen on Wikimedia under Creative Commons License.

Create Your Own Walk in Utrecht

Creating your own self-guided walk in Utrecht is easy and fun. Choose the city attractions that you want to see and a walk route map will be created just for you. You can even set your hotel as the start point of the walk.

Utrecht is one of the top touristic destinations in Netherlands. Thousands of tourists visit it every year. The city is famous for its lovely Museums. Most of them can be found in Museum Quarter. This tour will lead you to some of the best known museums in Utrecht.

Among Dutch cities Utrecht has one of the richest collections of medieval buildings. A blend of Baroque and Gothic styles, Utrecht’s architectural styles have been dictated by the Reformation and the Dutch wars. Take the following tour to discover the city’s best architecture.

Utrecht, one of the largest cities in the Netherlands, is a tourist-friendly destination renowned for its numerous cultural and historic treasures. On this orientation walk you will climb 465 steps to the top of the Dom Tower, visit the best music museum in the Netherlands, as well as the legendary Oudegracht ("old canal") and other remarkable sites fit to make anyone's visit to...  view more