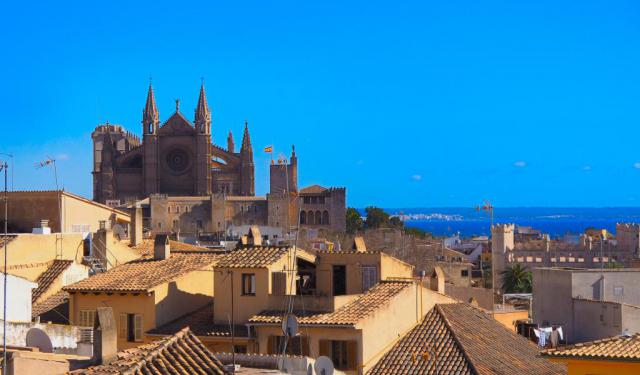 Image by Mark Kelly on Flickr under Creative Commons License.

A visit to Palma de Mallorca cannot be complete without exploring its main religious sights. Palma is full of fabulous churches and parishes that are truly worth seeing. This self-guided walking tour will take you to the most prominent places of worship, that should definitely not be missed when in Palma.
How it works: Download the app "GPSmyCity: Walks in 1K+ Cities" from iTunes App Store or Google Play to your mobile phone or tablet. The app turns your mobile device into a personal tour guide and its built-in GPS navigation functions guide you from one tour stop to next. The app works offline, so no data plan is needed when traveling abroad.

1) Church of Santa Eulalia (must see)

Later, the church underwent some changes to include the rosace and the carving of Saint Eulalia above the entrance, the work of Guillem Ferrer. In 1893, Joan Sureda i Veri restored the facade of the church giving it a more modern look.

Image by Chixoy on Wikimedia under Creative Commons License.
2

Dating from the 14th century, the Church of Sant Nicolau is an old parish church full of history. It is located at Carrer de Sant Nicolau in Palma de Mallorca. The original church on this site was built in 1302. Later, between 1309 and 1349, the new church appeared. In the late fifteenth century the Church of Sant Nicolau had to be restored as its nave had been damaged. The main facade and both portals date from the same epoch. In 1681 another restoration works take place, this time completely changing the apse and the decorations.

The main portal of the church is decorated with plant motifs. The frontal depicts the image of Sant Nicolau, dating from the 17th cenutry. Of special beauty is the Gothic altarpiece created in the 15th century and represents St. Nicholas by Miguel de Alcaniz.

Image by Chixoy on Wikimedia under Creative Commons License.
3

The works on the Parish Church of Sant Jaume began in 1327. Built in Gothic style, the church had a cross-vaulted nave and the arch-stones were decorated with the coats of arms of the families who donated money for its construction. The portal dates back to 1776 and is in baroque style. In 1870, the church was seriously damaged, but has been recently restored. Today, you will see a beautiful rose window at the front of the church and gilded altars inside.
Image by Paucabot on Wikimedia under Creative Commons License.
4

Located at Plaça de Santa Magdalena, next to the Convent of Santa Magdalena de Palma, the Church of Santa Magdalena is another impressive place of worship in Palma de Mallorca, dating back to the 14th century. It has been constructed in baroque style and in 1740 it has been completely rebuilt keeping its original design. It is the place where you can find the remains of Santa Catalina Tomàs. She was an orphan with a difficult childhood. Catalina was brought up in the house of her uncle, where she worked as a servant and a shepherdess. At an early age, the girl wanted to join the religious life. Thus, at the age of 12, she went to the Convent of St. Mary Magdalena with a request to become a nun. But, due to her age, the Convent refused and Catalina sat down on the stone, which has survived until present day, and said she would not move away until she was accepted into the monastery. It is also believed that Catalina was a mystic and prophetess.
Image by Anemar under Creative Commons License.
5

The church has a barrel vaulted nave with rib vaulted side chapels. Its altarpiece, with an image of St Michael. is a baroque work by Spanish painter Francesc Herrera.

Image by Jeremy Raff-Reynolds on Flickr under Creative Commons License.
6

Situated at Carrer de Sant Miquel, the Church of Santa Catalina de Sena was founded by Joan Baptista Despuig, a member of a 12th Century Order of Santiago, he was buried by the altar.

The church is dedicated to Santa Catalina, a nun who lived in the 14th century. Santa Catalina actively worked to solve the problems of the Catholic Church and was also the one who convinced Pope Gregory XI to transfer his administration back to Rome. In 1680, Francisco Herrera finalized the building in Italian style.
Image by Paucabot on Wikimedia under Creative Commons License.
7

Turned into a Military Hospital in 1836, the Parish Church of Santa Margalida is the only remaining unmodified example of a convent temple from the 13th-14th centuries. The audacity of its style lies in the fact that it doesn't have a facade and the main portal is not that impressive.

The proper restoration of the church took place between 1955 and 1966 by Alejandro Ferrant Vázquez. As a result of the Ecclesiastical Confiscations of 1836, many of the treasures from the Church of Santa Margalida were transferred to the Convent of La Concepción. After it was turned into a military parish, the tomb of Guillem de Torrella, an important person during the conquest of Mallorca and one of the founders of the church, was brought back. His sarcophagus represents a stunning example of 14th-century Gothic sculpture.
Image by Paucabot on Wikimedia under Creative Commons License.