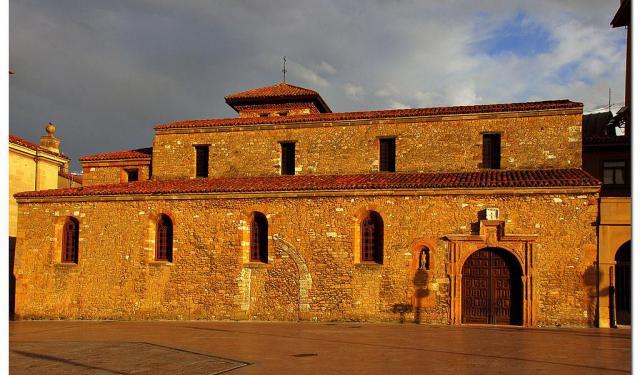 Image by Ramon Duran on Wikimedia under Creative Commons License.

It is believed that the city of Oviedo was founded by two monks, Nolan and John, in 761. And it is worth mentioning that the very first construction was a small church dedicated to Saint Vincent. A lot of beautiful churches have been built since then and we invite you to take this tour and explore the most significant religious buildings in Oviedo.
How it works: Download the app "GPSmyCity: Walks in 1K+ Cities" from iTunes App Store or Google Play to your mobile phone or tablet. The app turns your mobile device into a personal tour guide and its built-in GPS navigation functions guide you from one tour stop to next. The app works offline, so no data plan is needed when traveling abroad.

Iglesia de Santo Domingo is located in the Santo Domingo Square, in the historic center of Oviedo city. It was established in 1518. The church was originally part of a monastery complex, but today is attached to the school of the Dominicans. The church building was designed in Gothic-Renaissance style by the Spanish architect John of Cerecedo the Elder. It has a single nave, which is divided into five sections by cross vaults and is flanked by chapels and a choir at the base. The building facade is decorated with stylized pilasters and three beautiful arches, creating the doorway. The door, decorated with moldings, double pillars and small heads of guardian angels, appears under the arches.
Image by amaianos on Wikimedia under Creative Commons License.
2

Iglesia de San Isidoro is located in the Plaza de la Constitución, near the Oviedo town hall. It was built at the end of the 16th century as part of the Jesuits of San Matías college. In 1873, the college was demolished in order to build the Fountain market attached to the church. The present church building was constructed in neoclassic style with Baroque elements. The church features a tower on the south side of the structure. Originally, two towers were planned, but the plan didn't succeed. Iglesia de San Isidoro is listed as a “Bien de Interés Cultural” (National Artistic Monument).
Image by jlmaral on Wikimedia under Creative Commons License.
Sight description based on wikipedia
3

The Church of Saint Thyrsus (Spanish: Iglesia de San Tirso) is a Roman Catholic Asturia Romanesque church situated in Oviedo. Dedicated to Saint Thyrsus, it was built by Tioda, the royal architect of Alfonso II of Asturias. The Great Fire of Oviedo in 1521 and rebuilding in the 18th century removed most of the original elements, except for a three-light window. The building has suffered from major alterations over the centuries, so that only the general plan has been preserved. In the easternmost bay, owing to the smaller span, the arch was made sufficiently pointed to raise its crown to the same height as the others. This irregularity was already typical of Imperial Roman times, when barrel vaults were given a pointed form in order to make the height of rooms of varying size uniform, as it was necessary to raise the crown of the vault in some of them. This is illustrated by various chambers in the House of Tiberius on the Palatine. In the rectangular sanctuary a triplet round-arched window is preserved. With its pre-romanesque bases, rough brick arches, and capitals with rude packed leaves, it gives an idea of the better style of building and carving in the time of Alfonso II of Asturias. It is known that the church of San Tirso housed Royal Chapel.
Image by Ramón Durán on Wikimedia under Creative Commons License.
Sight description based on wikipedia
4

4) Cathedral of San Salvador (must see)

The Metropolitan Cathedral Basilica of the Holy Saviour or Cathedral of San Salvador is a Roman Catholic cathedral and minor basilica in the centre of Oviedo. The cathedral displays an array of architectural styles, from Pre-Romanesque to Baroque, including Romanesque, Gothic and Renaissance parts. It began as a large Pre-Romanesque basilica in the present location of the Gothic cathedral, but nothing more is known about that first building, built by order of King Alfonso II of Asturias. The Cathedral was founded by King Fruela I of Asturias in 781 AD, and enlarged in 802 by his son Alfonso II of Asturias known as Alfonso the Chaste, who made Oviedo the capital of Kingdom of Asturias, and resided in Oviedo with his court. Some Romanesque features, such as the Southern Tower, or the upper part of the Holy Chamber, include a fantastic collection of Romanesque column-statues. The cathedral of San Salvador is mainly a fine Gothic building, which was built between 14th and 16th centuries in a Classic and Flamboyant Style. The Chapter Room, whose construction started in 1388, was the first part of the new Gothic cathedral to be finished: built in a classic Gothic fashion (including a great eight-sided dome), it was followed by the cloister and the choir (ca. 1400). The naves were built once the choir was finished, all through the 15th century. We can admire the progression of the constructive stages, taking as an example the tracery of windows and tryphorium. The sanctuary is still a classical-Gothic work, whereas the naves present typical flame-like elements typical of a late-Gothic style. The latest medieval part, the narthex, was designed by Juan de Badajoz, whose original project included a double-towered facade (though due to financial issues, only a tower was built). The altarpiece at the end of the choir, is also a great work of sculpture and painting in Renaissance, perhaps one of the best of its kind in Spain. The major restoration of the cathedral complex was initiated with preliminary studies in 1995 at the request of the Principality of Asturias. Under the sponsorship of the Spanish National Plan for Cathedrals (Spanish: Plan National de Catedrales), the complex was restored from 1998 to 2002 for a total budget of €764,623.55.
Image by Labé on Wikimedia under Creative Commons License.
Sight description based on wikipedia
5

The Balesquida Chapel was founded in 1232 as the seat of the Brotherhood of the Balesquida. The current chapel is built in Baroque style. Since its inauguration, the church has been rebuilt several times, including in 1725, 1876 and the last restoration in 1952. The main decoration of the church interior are three original altars, dating back to the 17th century. Each of the altars has its own creation story. One of the chapel's most valuable features is the image of the Virgin and Child, created in early Gothic style at the end of the 13th century.
Image by Gonmi on Flickr under Creative Commons License.
Sight description based on wikipedia
6

Located on the Calle Conde de Toreno, La iglesia de las Esclavas del Sagrado Corazón is a relatively young church. It was built from 1942 to 1947 by two architects, Francisco Gonzalez Villamil and Miguel Duran. They managed to create a beautiful, gracious building, that amazes from the first sight with its obvious lightness. The blue and creamy facade is decorated with pilasters, small arched windows and a balcony on the second level of the structure. The entrance is crowned by the Sagrado Corazón (the Sacred Heart, also known as “Most Sacred Heart of Jesus”, one of the most widely practiced and well-known devotions, taking Jesus' physical heart as the representation of his divine love for humanity). The church is the only one in Oviedo to be open 24 hours a day.
Image by Gonmi on Flickr under Creative Commons License.
7

Iglesia de San Juan el Real was built in 1915 by architect Luis Bellido. It has the shape of the Latin cross, with aisles and a grandiose twin tower dome. On October 16th, 1923, the great Spanish general Francisco Franco and Carmen Polo were married at the Iglesia de San Juan el Real. The church represent an example of neo-Romanesque architectural style. It features modernist stained glass windows, beautiful frescoes on the dome and religious sculptures. Oviedo citizens usually call this church “Cathedral of the Eixample”.
Image by AurelianusRex on Flickr under Creative Commons License.
Sight description based on wikipedia