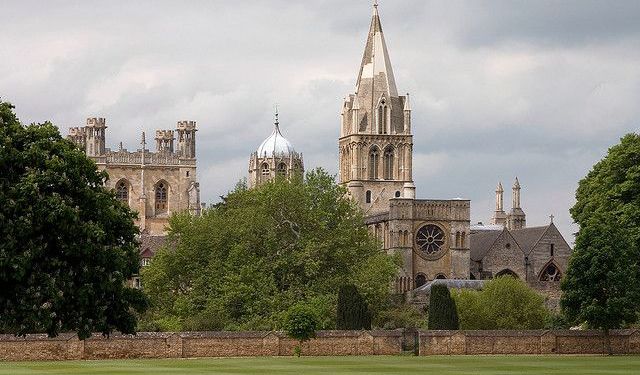 On top of being the home of the University of Oxford, the city of Oxford is also home to a great number of religious sites closely associated with to the history of English Christianity. Churches, college chapels and prayer houses with tremendous architecture are found here in abundance. If you're a religious person or history- or architecture buff, or all of that, you will definitely find interest in taking this self-guided walk to explore the most important religious buildings in Oxford.
Image Courtesy of Flickr and jimmyharris.
How it works: Download the app "GPSmyCity: Walks in 1K+ Cities" from iTunes App Store or Google Play to your mobile phone or tablet. The app turns your mobile device into a personal tour guide and its built-in GPS navigation functions guide you from one tour stop to next. The app works offline, so no data plan is needed when traveling abroad.

Christ Church holds a rather unique position of being both a college chapel and the cathedral of the Diocese of Oxford. Until the 20th century it was also the smallest cathedral in the United Kingdom.

Its history predates the Norman Conquest, when a shrine was built on the site in memory of St Frideswide, a much-persecuted 7th century priestess, who seemed to have spent most of her life guarding her chastity from the amorous attentions of King Algar, one of the kings of the Seven Kingdoms of Saxony.

By 1122, the cathedral had been part of the St Frideswide Priory, but in 1520 the buildings and lands were confiscated by Cardinal Wolsey who wanted them to build Cardinal College. Five of the bays in the western part of the nave were demolished to build what is now Tom Quad, before Wolsey, in his turn, was ousted by King Henry VIII, who had Christ Church College built on the foundations.

The rest of the cathedral was built in the Perpendicular, or English Gothic style, with the five bays of the eastern part of the nave, the choir and the tower keeping the original Norman appearance.

The wonderful rose window, in the Botanical style, features ten petals around the central glass. Other windows of note are the Becket Window, dating back to 1320, which survived the Reformation, and the Jonah Window, depicting the City of Nineveh, created in 1632.

The shrine of St Frideswide has been restored and stands before a beautiful stained glass window with 16 panels that tell the story of her life. If you look closely at the 16th panel, you will see a water-closet, which certainly didn’t exist in the 8th century and is a give-away to the window’s Victorian creation.

The Cathedral Shop, where you can buy souvenirs, books and CDs among other gift items, is housed in the 12th century Chapter House. While browsing the shelves, take a look at the vaulted ceiling where you will see 13th century medallions depicting the Saints.


Image Courtesy of Wikimedia and Ozeye.
Sight description based on Wikipedia.
2

Of all the college chapels in Oxford University, Merton College Chapel is the largest and is one of the best examples of Early English Period architecture.

The first chapel built for the college in 1266, it wasn’t very sound and, by 1288, through bad upkeep, had almost fallen into ruin. The new church was started in 1290, with the Choir and the huge East Window finished in 1294.

Its Quire Walls have seven pairs of stained-glass windows, 12 of which, including the Annunciation Scene and heraldic glass in the East Window, were created in 1296. The other two windows date back to the 15th century; all of them survived the Reformation.

The Crossing and the South Transept were completed in the 14th century; the North Transept and the Great Tower were built in 1450. The Gothic roodscreen and the lectern, which was donated by John Martlock in 1504, were left untouched by King Henry VIII’s Suppression Acts.

In 1655, the roof of the South Transept collapsed and was rebuilt by Sir Christopher Wren in 1671; the medieval bells were recast at the same time. In 1802, the College Brewery was installed in the Sacristy, but was removed in 1886 when the chapel was restored, and the monuments in the Sanctuary were moved to the Ante Chapel. The beautiful chamber organ, built by Thomas Parker in 1762, was left in place and underwent restoration in 1999.

The chapel served for many years as the parish church of St John, as well as the college chapel, which explains its size. There is a door leading onto North Street, through which the parishioners entered, and two doors opening onto Merton College.
Image Courtesy of Wikimedia and Tom Murphy VII.
3

3) University Church of St. Mary the Virgin (must see)

The University Church of St Mary the Virgin is the largest parish church in Oxford. It stands on High Street and is surrounded by colleges, which is why it is so popular with the students and professors.

The first church on this site was built in 1086 and when the university was founded in the 13th century, it was considered to be its first building. In 1320, a two-storey edifice was constructed on the north side of the chancel; the ground floor was the university’s Convocation House and today it houses Vault Café. The upper floor became the university’s first library, with books donated by Thomas Cobham.

The church’s Baroque porch was designed by Nicholas Stone. Its 13th century tower affords excellent views, and is open to the public. The steeple is reputed to be the most beautiful in England.

In 1555, the Oxford Martyrs were tried and condemned inside this church. You will notice that a section of the pillar opposite the pulpit is missing. This was cut out to support a small platform where the former Archbishop of Canterbury, Thomas Cranmer, stood while withdrawing his recantation of his Protestant faith, before being taken out and burnt at the stake.

At the end of the 15th and the early 16th centuries, most of the church was rebuilt in the Perpendicular style, only the tower and the spire remained untouched. Out of the 12 statues, 11 were replaced in 1894 by George Frampton.

Into the 17th century, the church was used for graduation ceremonies, until the church officials got fed up with the very un-Christian parties held afterwards, and therefore they had the Sheldonian Theatre built to host the ceremonies instead.
Image Courtesy of Flickr and Andy Montgomery.
4

4) St Michael At The Northgate Church

While in Oxford, you will certainly want to visit the Saxon Tower, which is the oldest building in the city. But don’t stop just there; the tower is attached to the lovely St Michael at the North Gate Church, and it would be a pity to visit the tower without exploring the church.

The original church was in the Domesday Book, but today only the tower remains. A part of the church – the chancel, the eastern wall nearest the altar in the south aisle, and the south door – date back to the early 13th century.

The stained glass in the East Window of the chancel was also created in the 13th century and is the oldest example of its kind in Oxford.

The Lady Chapel was built in the 14th century, while the north aisle and the nave were constructed a century later; the font was placed around the same time. The north aisle and the transept were rebuilt by John Plowman in 1883.The church was restored in 1953 after a fire destroyed a large part of it.

Since 1971, it has been the City Church of Oxford, which means that the Mayor and the Corporation of Oxford are expected to worship here. Once a month, the church hosts music recitals and jazz concerts.
Image Courtesy of Wikimedia and Robert Cutts.
5

The ground on which St Mary Magdalen’s Church stands today has been a place of worship for over a thousand years, and you shouldn’t miss a visit to this beautiful church.

The original church on this site was a wooden affair and was burnt to the ground by the Vikings around 1013. In 1074, Robert d’Oyly built a chapel with a single aisle to replace the ruins of its wooden predecessor. The chapel was rebuilt and expanded in 1194 by Saint Hugh, the Bishop of Lincoln. In 1842, George Scott rebuilt the chancel and north aisle.

The interior is Victorian Gothic, softly lit by the sunlight streaming in through the stained glass windows. The lovely West Window depicts the city’s medieval history, and was executed in 1898 by Elizabeth Wigram.

The beautifully ornate font was sculpted in 1350; the Holy Water stoup was placed in 1513, the same time as the tower was built. There is an alabaster memorial dedicated to William Pickering that dates back to 1640, next to the north door. The raredos behind the High Altar was executed in 1894. The church’s full peal of ten bells was installed in 2003.
Image Courtesy of Wikimedia and Robert Cutts.