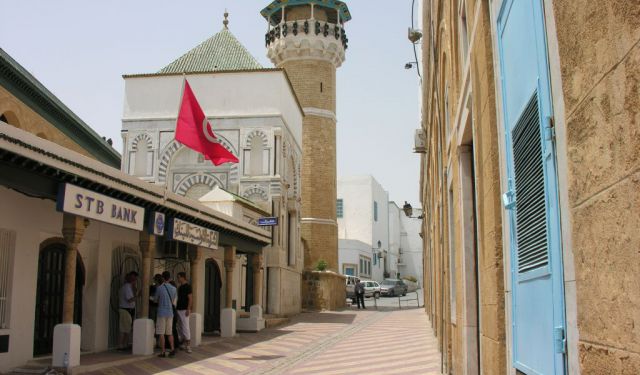 Image by Citizen59 on Wikimedia under Creative Commons License.

Being the oldest part of Tunis, Medina is packed with a number of great mosques of both religious and historical value. Most of them have high minarets, marble columns, beautifully decorated prayer rooms and mausoleums of famous people. Mosquée Zitouna, built in the 9th century, is the Tunisian jewel.
How it works: Download the app "GPSmyCity: Walks in 1K+ Cities" from iTunes App Store or Google Play to your mobile phone or tablet. The app turns your mobile device into a personal tour guide and its built-in GPS navigation functions guide you from one tour stop to next. The app works offline, so no data plan is needed when traveling abroad.

Saheb Ettabaâ Mosque, also known as Youssef Saheb Al Tabaa Mosque is an official Historical Monument. It is the last great mosque built in Tunis before the establishment of French protectorate in 1881.

It bears the name of the Grand Vizier Yusuf Saheb Ettabaâ and was opened in 1814. Its construction lasted six years, from 1808, led by Ben Sassi and a workforce consisting primarily of slaves captured by European pirates to Tunis and made available to the Minister by Hammouda Pacha. It is influenced by Italian architecture; columns with fluted shafts, capitals and especially a unique type of veneer marble polychrome.

The mosque dominates the imposing Halfaouine district with its many domes and colonnaded galleries Italian marble work. It is part of a monumental complex built at the same time including a bazaar, a hammam, two madrasas, a sabil or public fountain, a funduq and Ettabaâ Saheb's palace (now a public library) as well as his tomb. The combination of these schedules in place of worship is a unique example in the construction of religious buildings.

Its minaret is octagonal remained unfinished until 1970, when restoration work has finished his lantern.

Image by Rais67 on Wikimedia under Creative Commons License.
Sight description based on wikipedia
2

Tip:
In order for non-Muslims to visit the interior, they should convert to Islam, so you can perhaps satisfy yourself, without too many dramas, by observing this mosque from the outside.
Image by Youssefbensaad on Wikimedia under Creative Commons License.
Sight description based on wikipedia
3

You will easily find this mosque opposite Kasbah Square. It was built between 1231 and 1235 and has a rectangular prayer room, gorgeous arches, marble columns, and a remarkable minaret. The top of the tower is crowned with a lantern.

Tip:
As with other mosques in Tunis, you cannot visit inside being a non-Muslim.
Image by Rais67 on Wikimedia under Creative Commons License.
4

Why You Should Visit:
The mosque itself is really nice and even the courtyard is interesting (if you are lucky), but it's the neighborhood – the side streets, the cafeterias, etc. – that you should explore at least once.
Image by Citizen59 on Wikimedia under Creative Commons License.
Sight description based on wikipedia
5

Editor's Note: CLOSED FOR RESTORATIONS AS OF JAN 2019

Built in the 18th century, the Tourbet el Bey is a Tunisian royal mausoleum in the southwest of the medina of Tunis. It is the largest funerary monument in Tunis, mainly known for housing the marble graves of the Husseinite dynasty which ruled Tunisia for a long time. Besides members of their families, favorite ministers and court people are also buried here. The graves occupy the courtyard and some rooms. You will be impressed by the mausoleum's richly decorated rooms and finely worked stucco on the ceiling domes inside them.
Image by Moumou82 on Wikimedia under Creative Commons License.
6

Tip:
As a non-Muslim, you may take a look at the square of the mosque (via the main gate) and snap some photos, but will not be allowed entrance to the prayer room.
Image by Citizen59 on Wikimedia under Creative Commons License.
7

Situated at Place de l'Indépendence in Ville Nouvelle, the Cathedral of St. Vincent de Paul is a Roman Catholic church in Tunis dedicated to the patron saint of charity.

The church was built in a mixture of styles, including Moorish revival, Gothic revival, and Neo-Byzantine architectural traditions. Construction began in 1893 and the church was opened at Christmas 1897. Imposing and unique, it is the largest surviving building from Tunis' colonial era and is still a living church thanks to a community of foreigners. Directly opposite is the French embassy, built in colonial times as residence of the French governor.