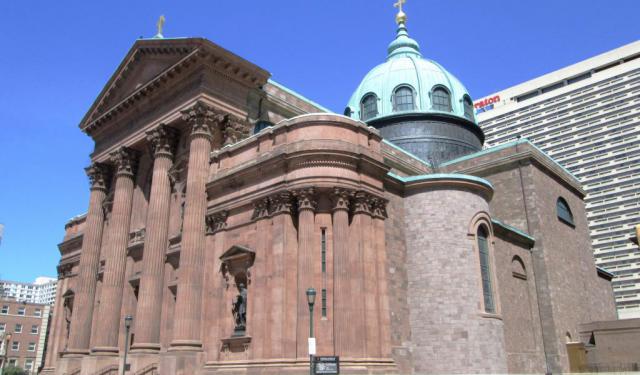 Like every historic city, Philadelphia has a vast collection of old churches and historic places of worship. Many of its religious buildings are National Historic Landmarks. Take this self guided tour to see some of the most beautiful religious buildings in Philadelphia!
Image Courtesy of Wikimedia and Beyond My Ken.
How it works: Download the app "GPSmyCity: Walks in 1K+ Cities" from iTunes App Store or Google Play to your mobile phone or tablet. The app turns your mobile device into a personal tour guide and its built-in GPS navigation functions guide you from one tour stop to next. The app works offline, so no data plan is needed when traveling abroad.

The Cathedral Basilica of Saints Peter and Paul, head church of the Roman Catholic Archdiocese of Philadelphia, is the largest Catholic church in Pennsylvania and listed on the U.S. National Register of Historic Places. With its majestic façade, vaulted dome, ornate main altar, eight side chapels and main sanctuary that comfortably holds 2,000 worshippers, the Cathedral-Basilica of Saints Peter and Paul is the largest brownstone structure and one of the most architecturally eminent structures in the city of Philadelphia. Erected in 1864, the cathedral, presented in a Roman-Corinthian style of architecture, is modeled after the Lombard Church of St. Charles (San Carlo al Corso) in Rome.
Image Courtesy of Wikimedia and Michael Barera.
Sight description based on Wikipedia.
2

The Arch Street Presbyterian Church is located three blocks away from the City Hall in downtown Philadelphia. This marvelous church, designed by Stephen Decatur Button, was built in 1855 and is listed in the National Register of Historic Places. The building represents a beautiful example of 19th Century NeoClassiscm and has recently undergone major renovation inside and out. Regular services are held here every Sunday, plus special Lent services, including a noon time devotion for those in Center City, and Welsh holidays and festivals.
Image Courtesy of Wikimedia and Smallbones.
3

Saint Clement's Church is an historic Anglo-Catholic parish. On November 20, 1970, Saint Clement's Church was added to the National Register of Historic Places. Designed by noted Philadelphia architect John Notman, construction of the building began in 1856 and was completed three years later. The main façade is dominated by the bell tower and the assertive semi-circular apse, which features a blind arcade of simple columns and Romanesque arches. The interior of the church is dominated by the large carved oak reredos and triptych, installed in 1908, which stand above the high altar.
Image Courtesy of Wikimedia and user:Dgf32.
Sight description based on Wikipedia.
4

The First Unitarian Church of Philadelphia is a Unitarian Universalist congregation located on Chestnut Street in Philadelphia. As a regional Community Center it sponsors cultural, educational, civic, wellness and spiritual activities.

The current church building was completed in 1886. The sanctuary features a hammer-beam ceiling, painted rust red and stenciled with gold-leaf daffodils, which is complemented by blue walls. The church's stained glass windows are by Louis Tiffany & Co. and John La Farge. Later additions include a concert-grade Casavant pipe organ with 3 manuals and 50 ranks. In addition to the sanctuary, the building also contains a basement level housing Griffin Hall, which includes a stage and commercial-size kitchen. The rear portion of the building contains the Parish Room for meetings, and a smaller chapel. The mezzanine and 3rd floors contain a variety of offices, meeting rooms, storage, and daycare facilities.

Image Courtesy of Wikimedia and Smallbones.
Sight description based on Wikipedia.
5

5) Church of the Holy Trinity

Church of the Holy Trinity is an Episcopal church on Rittenhouse Square in Philadelphia. The church building was designed by Scottish architect John Notma and the first service was held on March 27, 1859. The corner tower was added in 1867 and was designed by George W. Hewitt of the firm of Fraser, Furness & Hewitt. It is designed in the simpler "low church" style, rather than the fancier "high church" or Anglo-Catholic style of Notman's nearby St. Marks Episcopal Church.

The church's rector from 1862 to 1869 was Phillips Brooks, probably most famous as the author of the lyrics to the familiar Christmas carol "O Little Town of Bethlehem". Renowned (and sometimes reviled) for his ebullient homilies and his staunch opposition to slavery, Brooks delivered a eulogy to Abraham Lincoln in the church on April 23, 1865, following the U.S. President's assassination on April 14. This sermon was reprinted and widely read. After the end of the American Civil War, Brooks took a sabbatical from the church to travel to Europe, Israel and Palestine. His visit to Bethlehem inspired him to write a poem for his Sunday School students, and for the church's 1868 Christmas season he had church organist Louis Redner set the poem to music. The result was “O Little Town of Bethlehem."

Philadelphia's Church of the Holy Trinity is also known for its numerous stained-glass windows, including five by Louis Comfort Tiffany and one by Luc-Olivier Merson. The church was listed on the National Register of Historic Places in 1973.

Image Courtesy of Flickr and shadysidelantern.
Sight description based on Wikipedia.
6

The Lady Chapel designed by Cope and Stewardson in the late decorated Gothic style, was built in 1900. The chapel's the ceiling is the first known example in the US of a stone vault. Both construction of the chapel and its furnishings were donated by Rodman Wanamaker in memory of his late wife. Because of its architectural quality and significance, the building has been designated a National Historic Landmark.
Image Courtesy of Wikimedia and Paul R. Burley.
Sight description based on Wikipedia.