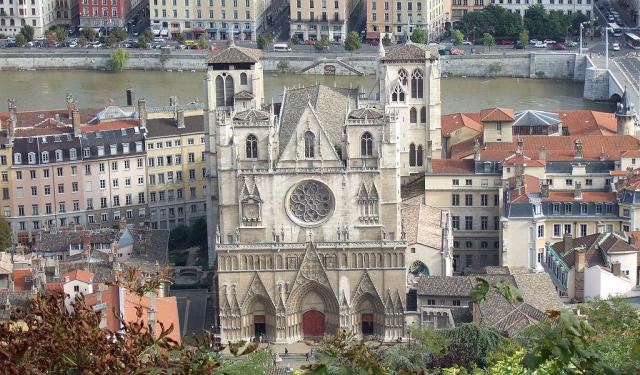 Lyon's beautiful religious buildings showcase the richness of the city's culture and architecture. All the churches on this tour date back centuries and capture the architectural style popular at the time when they were built. Take this self-guided tour to discover the best-known and the most beautiful religious buildings in Lyon.
Image Courtesy of Wikimedia and Haragayato.
How it works: Download the app "GPSmyCity: Walks in 1K+ Cities" from iTunes App Store or Google Play to your mobile phone or tablet. The app turns your mobile device into a personal tour guide and its built-in GPS navigation functions guide you from one tour stop to next. The app works offline, so no data plan is needed when traveling abroad.

You may be forgiven to think that the Basilique de Fourvière is the most important church in Lyon, considering its elevated, eye-catching position on top of the eponymous hill, some hundreds of meters above the River Saône.

The church stands on the site of a Roman forum of Trajan and an early Christian temple, and was built in 1872 by Pierre-Marie Bossan showing an unusual departure from the then fashionable Gothic style towards a mixed Romanesque-Byzantine appearance.

Funded privately by the nobles of Lyon, the temple was built in white stone with crenelated walls and four main towers. A gilded statue of Virgin Mary tops the bell tower.

In fact, there are two churches there, standing one on top of the other. It is only when you learn that the church was built and decorated to show off Catholic wealth after France’s humiliating defeat in the Franco-Prussian War of 1870, that you start to realize that everything there is a slightly over-the-top. But never you mind, just forget the past and enjoy the beauty of the present.

The interior is quite simply breathtaking, with magnificent wall frescoes, elaborate mosaics on the upper arches and the ceiling, marble statues and beautiful stained glass windows. The crypt of Saint Joseph is as beautifully decorated as the rest of the building.

Between the church and the adjoining Chapel of the Virgin is a terrace that affords great views of the city, but if you want to see Lyon in all its splendor, there is an observatory on top of the north-east tower, with only 297 steps to climb!

The Lyon Cathedral (Cathédrale Saint-Jean-Baptiste de Lyon) is an archbishopric church and thus is the main church in the city.

It was built between 1165 and 1480 on the site of the ancient Sainte Croix and Etienne churches, whose vestiges can be seen in the nearby archaeological gardens.

Because of the time it took to build, the cathedral has two distinct architectural styles: the eastern end containing the apse and the choir is in Romanesque style, while the nave and the façade are in Gothic style. Above the main portal there are several medallions representing the signs of the Zodiac, the Creation and the life of Saint Jean.

While the church may seem austere, if you visit the Basilique de Fourvière, in the choir you will see lovely 13th century stained glass windows, and on the left and right of the main altar there are two crosses dating back to 1274. You can also admire there several paintings, including the “Adoration des Mages” by Houyez, “La Circoncision” by Vignon and “Le Christ et la cananéenne” by de Plattemontagne.

The most compelling item within the cathedral is the magnificent astronomical clock in the north transept. Built in the 14th century, it is a marvel of technology for the era and it still works today. When it chimes on the hours of 12, 2, 3 and 4, a cock crows and the angels make a triumphant sound – reminding us of St Peter denying Christ before dawn and His subsequent entrance into Heaven.
Image Courtesy of Flickr and Guillaume Baviere.
3

The Eglise Catholique de Saint Paul is one of the oldest churches in Lyon and one of the best preserved.

The first church, which was part of a monastery, was built around 549 and destroyed in 732. A new church was built over the remains of its predecessor in the 9th century, but the church you will see today is the result of different stages of reconstruction dating from the 11th to the 19th centuries.

In the 10th century the church became part of a necropolis with three cemeteries. The bell tower was added in 1440. The exterior of the Gothic side chapels feature decorations of leaves and animals under the cornice with animal grotesques over them. The dome has two floors of blind arches set at irregular intervals.

The lantern on top of the bell tower was added in 1835 and the eleven bells in the tower were installed in 1899. The spire was once wooden, but this was replaced by a stone one in 1982.

During the Revolution, the church was used to stock saltpetre and when it became a parish church, in 1801, the paving had to be replaced. The decorations over the St Lawrence entrance are eggs and Acanthus leaves. The nave has four bays separated by four pillars, whose sculpted capitals depict leaves and human heads. The quarter-circle vault in the apse has early 20th century frescoes by Borel.

The side chapels date back to the 15th century and in one of them you can admire “L’Adoration des Bergers”, painted by Blanchet in 1688.
Image Courtesy of Wikimedia and Vincant ACHILLE.
Sight description based on Wikipedia.
4

Like so many churches in Lyon, Notre Dame de Saint Vincent was once part of a monastery. Its interior reflects the simple tastes of the monks who once prayed here.

The church was built for the Augustinian monks who settled in the area in 1319. It was mostly rebuilt between 1759 and 1789 to replace their ancient chapel, which was falling into ruin. They named the church St Louis in honor of the crown prince who donated funds to the building.

During the Revolution it was first used as a warehouse and then as a hospital annex. The army took over the rest of the monastery, which in 1831 became La Martinière College.

The church was renamed in 1863, and in 1862 the nave was enlarged and the facade was built by Franchet. In 1987 the church was destroyed by fire and was rebuilt in a 19th century style. It reopened to the local congregation in 1992.

Although the interior is rather plain, there are some lovely statues to admire, including one of St Louis and another of the Virgin by Fabisch, a statue of St Vincent by an unknown sculptor, and “The Baptême of Christ” by Dufraine.

The paintings in the choir were installed in 1996. They include “Lumière d’Emmaüs” and “L’Annonciation” by Hamelin. You will see another of his works, “Le Créateur”, on the apse’s quarter-circle vault.
Image Courtesy of Wikimedia and Alexandre.norman.
Sight description based on Wikipedia.
5

The church of Saint Polycarpe stands on La Croix-Rousse Hill and is a lovely church that is well worth visiting.

It was built in 1670 by the Oratorians, although the facade with its four Corinthian pilasters supporting a triangular pediment was the work of Loyer in 1751. At the same time, the nave was enlarged.

The facade was badly damaged during the Revolution when the quarter was subjected to heavy canon fire. Between 1826 and 1836 the building was repaired and enlarged; the transept, the cupola and the choir were built by Farfoullin.

In the 19th century a large decoration project was undertaken, with some of the best artists in Lyon, putting their hearts into their work to produce the fine statues and furnishings that you can see today.

The marble pulpit is decorated with sculptures created by Dufraine in 1864, and the abat-voix (the canopy over the pulpit) was designed by Bossan.
Image Courtesy of Flickr and genevieveromier.
Sight description based on Wikipedia.