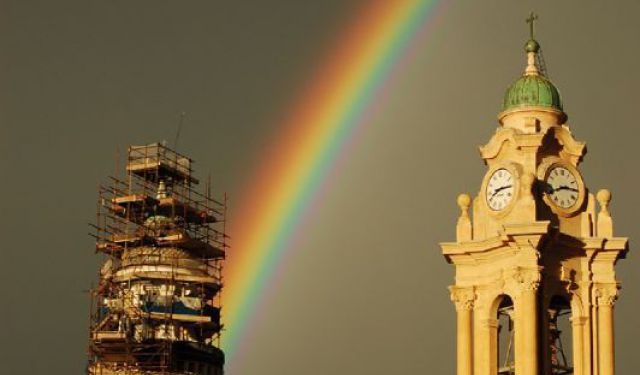 Image by dottorpeni on Flickr under Creative Commons License.

Genoa is a city with a great spiritual life. Many churches means many possibilities of praying for parishioners with different beliefs. Interesting places and historical moments perceived in the pieces of art and architectural preservation of the buildings, is what tourists will find by following this guide's itinerary.
How it works: Download the app "GPSmyCity: Walks in 1K+ Cities" from iTunes App Store or Google Play to your mobile phone or tablet. The app turns your mobile device into a personal tour guide and its built-in GPS navigation functions guide you from one tour stop to next. The app works offline, so no data plan is needed when traveling abroad.

Sant'Agostino is a church in the historical center of Genoa, northern Italy. It is today deconsecrated, sometimes used for representations of nearby Teatro della Tosse. Begun by the Augustinians in 1260, it is one of the few Gothic buildings remaining in the city, after numerous demolitions in the 19th century. It has a typical façade with bichrome stripes in white marble and blue stone, with a large rose window in the middle. Notable is the ogival portal with, in the lunette, a fresco depicting St. Augustine by Giovanni Battista Merano. At the sides are two double-mullioned windows. The interior has a nave and two aisles divided by ogival arches supported by robust columns with cubic capitals. The church has also two cloister now included into a museum.
Image by Davide Papalini on Wikimedia under Creative Commons License.
Sight description based on wikipedia
2

The church of San Giorgio is a religious building in the historic center of Genoa, located in St. George Square. The church of St. George, founded a very long time ago - could boast for centuries about the privilege of guarding the national flag and celebrating the rites of civilians; the rest of the cult of the saint (the first patron of the city) was introduced very early in Genoa. The octagonal building, with round dome and curved facade, was rebuilt in the mid-nineteenth century and decorated in Neoclassical style; the tower is situated on a nearby house.

Inside there are three paintings of Luca Cambiaso illustrating the "Martyrdom of St. George" (second half of 1500s). You can also see a "Christ and Santa Caterina Fieschi" by Domenico Guidobono and "San Gaetano Thiene it receives from the Virgin and Child" by Domenico Piola (respectively the first and third altar on the right) and a "Pieta" by A. Sanchez Coello (XVI).

Image by Alessio Sbarbaro on Wikimedia under Creative Commons License.
3

The church of San Tropete is a religious edifice in the historic center of Genoa, Piazza San Giorgio, right next door to San Giorgio church. The parish community is part of the East Central Vicariate of the Archdiocese of Genoa. The cult of St. Tropete was imported to Genoa by the merchants of Pisa. The temple is easily recognizable by its rectangular arch (in oval) with recesses at the corners, while inside the elliptical dome occupies the entire space, highlighted by stucco, giving continuity to the environment.
Image by Alessio Sbarbaro on Wikimedia under Creative Commons License.
4

The basilica of Santa Maria delle Vigne (originally: Sancta Maria in Vineis) is one of the oldest Catholic churches in Genoa. Historical documents attest to its presence since the 10th century, although it is more plausible to say that it was built in an even older sacred building dating back to the 6th century. Elements of original Romanesque architecture are still present, even in walls and under floors, although the only part left intact in the process of reconstruction appears to be the place between the perimeter walls of the church and the cloister.
Image by Alessio Sbarbaro on Wikimedia under Creative Commons License.
5

The church of St. Luke is a religious building in the historic center of Genoa, located in Via San Luca. The parish community is part of the West Central Vicariate of the Archdiocese of Genoa. Founded in 1188 by Oberto Spinola, the church has other important works: the marble statue with the 'Immaculate' altar and the "Deposition of Christ" in wood (painted by Piola), both by Filippo Parodi (late 17th century), the 15th-century reliquary tabernacle in the apse at the back, accessible from the corridor of the sacristy, but especially the "Nativity" absolute masterpiece of Giovanni Benedetto Castiglione, called Grechetto (1645).
Image by Alessio Sbarbaro on Wikimedia under Creative Commons License.
6

The church of San Pancrazio is a religious building in the historic center of Genoa, located in Piazza San Pancrazio near Via Fossatello Sottoripa. The parish community is part of the West Central Vicariate of the Archdiocese of Genoa. The first mention of the church and noble families Calvi Pallavicini date back to the eleventh century, although the current building is a reconstruction of the eighteenth century. The church is centrally planned and with a high dome, and several pictorial and sculptural elements. Apse frescoes are the work of painter Giacomo Antonio Boni, while the triptych of the Life of St. Pancras - dating from the early sixteenth century, dismantled in 1691 and recently reconstructed behind the marble altar after a restorative intervention - was attributed to Adrien Ysenbrant.
Image by Alessio Sbarbaro on Wikimedia under Creative Commons License.
7

The Basilica della Santissima Annunziata del Vastato is a Catholic cathedral in Genoa, northern Italy; its decoration employed the major Baroque studios and artists in Genoa in the 17th century. The church was begun by the Franciscans in 1520 in a site previsouly occupied by the small church of Santa Maria del Prato, belonging to the Humiliati. Works were however halted in 1537, and in 1591 the Lomellini family continued the reconstruction, directed by Taddeo Carlone. In the early 17th century the rich Baroque decoration was executed, with Andrea Ansaldo in charge of completing the works, and in particular the dome. The current Neoclassicist façade dates back to the 1830s and 1840s, designed by Carlo Barabino. At the central crossing, the cupola dome has an Assumption fresco, considered the masterpiece of Giovanni Andrea Ansaldo, and restored later by Gregorio De Ferrari.
Image by Davide Papalini on Wikimedia under Creative Commons License.
Sight description based on wikipedia
8