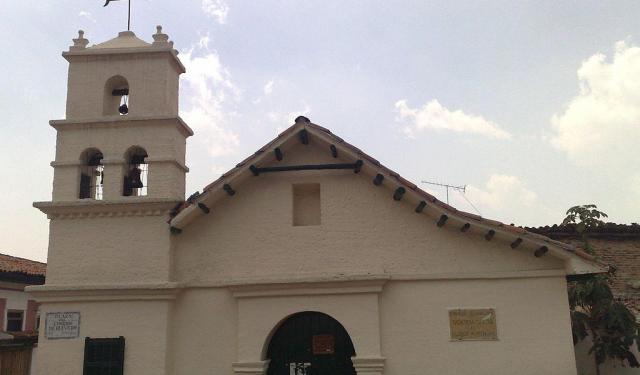 Image by Kamilokardona on Wikimedia under Creative Commons License.

Religion has always played an important role in the history of Bogota, and Columbia in general. The sumptuous churches of Bogota are true architectural marvels of a great historical value. All in all, they are well worth your attention, so do spare some time to take the religious tour of Colombian capital.
How it works: Download the app "GPSmyCity: Walks in 1K+ Cities" from iTunes App Store or Google Play to your mobile phone or tablet. The app turns your mobile device into a personal tour guide and its built-in GPS navigation functions guide you from one tour stop to next. The app works offline, so no data plan is needed when traveling abroad.

The National Sanctuary of Our Lady of Carmen is a temple of the Catholic cult dedicated to the Virgin Mary under the name of Carmen. It is located in barrio La Candelaria, the historic sector of Bogotá. The temple was designed by architect Giovanni Salesian Buscaglione with Florentine Gothic, Byzantine and Arabic touches. The building has three naves and a Latin cross plan. For its historical significance, originality, invaluable architectural value and artistic treasures, the shrine (with the Salesians of Leo XIII) was declared a National Monument by Decree 804 on April 30, 1993. Today, it is a symbol of Salesian community building and architecture.
Image by Juliandesigner on Wikimedia under Creative Commons License.
2

The Church of San Ignacio was the biggest church during the colonial period. Its construction lasted from 1610 till 1767. The architect of the church of San Ignacio was Father Juan Bautista Coluccini (1604-1641), a Jesuit priest of the Society of Jesus. Jesuit brothers Pedro Perez, Rafael Ramirez, Diego Marcos Guerra and Loessing, the last author of many of the altars, tabernacles, pulpit and choir clad and brokers, collaborated with him in the construction.
Image by °° OJOS DE AGUA °° on Flickr under Creative Commons License.
3

The Archbishopric Cathedral of Bogotá is a Roman Catholic cathedral located on the eastern side of Bolívar Square in Bogotá, D.C., Colombia. It is the seat of the Archbishop of Bogotá, Cardinal Mon. Pedro Rubiano Saenz. The Cathedral was built between 1807 and 1823. When the Spanish conquerors officially founded the city of Bogotá (changing the original Indian name of the city: Bacata), they were established in 12 huts and a hay-church, that would take the name of Archbishopric Cathedral of Bogotá after being totally built. Biggest in Colombia and one of the biggest in South America, the cathedral holds the remains of Gonzálo Jiménez de Quesada, founder of Bogota.
Image by Tom on Flickr under Creative Commons License.
Sight description based on wikipedia
4

Spanish architect Santiago Matias finished the construction of the church convent of Santa Clara in 1647. The old Church of Santa Clara is now Museo de Arte Colonial and contemporary art space. It is located in the Historic Center of Bogotá, in the neighbourhood known as La Candelaria. The space is administered by the Ministry of Culture of Colombia.

Image by IMAGEN09 on Flickr under Creative Commons License.
5

The Church of Our Lady of the Conception is a Catholic house of worship dedicated to the Virgin Mary under the patronage of the Immaculate Conception. It is located in the neighbourhood of La Candelaria, the historic sector of Bogotá (Colombia) and belongs to the ecclesiastical jurisdiction of the Archdiocese of Bogotá. The temple was part of the old monastery of the Conception; it consists of a single rectangular nave and was built from 1583 to 1595, under the parameters of colonial buildings. It has two entrances located on the right side wall of the nave, which communicate with the exterior, characteristic of a church belonging to a nunnery. For its historical significance, architectural and cultural value, the temple was declared a National Monument by Decree 1584 on August 11, 1975.
Image by Baiji on Wikimedia under Creative Commons License.
6

The church of San Francisco is a Catholic temple of worship under the protection of St. Francis of Assisi in the city of Bogotá, Colombia. This church was built between 1550 and 1567 on the right bank of the river Vicachá (later better known as San Francisco River) by the Franciscan brothers. It is currently the oldest church preserved in Bogotá and is nestled on the corner of Avenida Jimenez and Carrera 7.
Image by Dvwoud09 on Wikimedia under Creative Commons License.
7

Also known as the Third Temple, the church is considered a jewel of colonial religious architecture in Bogota. Some say that the name "The Third" is because of the three churches located in that region: San Francisco, La Veracruz and La Tercera, but in fact its name comes from the founders of the Franciscan Third Order Secular. Its construction began in 1760 and was completed between 1774 and 1780, according to Daniel Ortega and Ricaurte.
Image by Pedro Felipe on Wikimedia under Creative Commons License.
8

One of the first churches built by the conquistadors in Santa Fe was the chapel of Veracruz, established in 1546, 8 years after the founding of Bogota, on the other side of the river Viracocha, on the road to Tunja. Years later, in 1631, he formed the Market Square San Francisco (now Santander park), which was extended by the Hermandad (Brotherhood) de la Veracruz, composed of merchants. The 1827 earthquake destroyed much of it and it was rebuilt. The church is not an example of fine architecture or a subject of great historic interest, yet here lie the remains of many patriotic martyrs, so it was declared a National Pantheon.
Image by Pedro Felipe on Wikimedia under Creative Commons License.