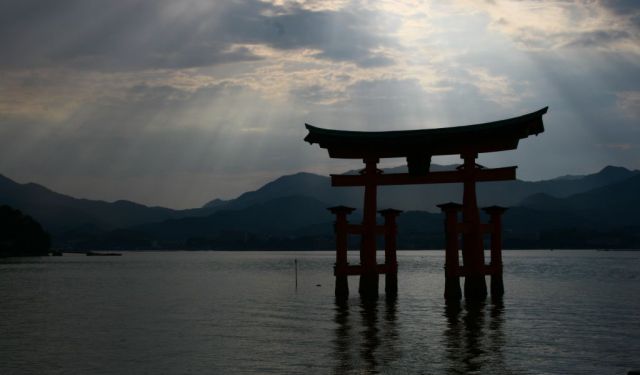 Image by Vincent on Wikimedia under Creative Commons License.

Buddhist temples and Shinto shrines dot Japan’s landscape. These temples and shrines are an architectural splendor and many of these can be found in every part of Tokyo. This guide will take you to the smaller Buddhist temples and Shinto shrines in the Takanawa neighborhood of Tokyo. Most often overlooked by tourists, these temples and shrines are a beauty and should not be missed.
How it works: Download the app "GPSmyCity: Walks in 1K+ Cities" from iTunes App Store or Google Play to your mobile phone or tablet. The app turns your mobile device into a personal tour guide and its built-in GPS navigation functions guide you from one tour stop to next. The app works offline, so no data plan is needed when traveling abroad.

The Koyasan Tokyo Betsuin is a place of worship for the Shingon Sect of Buddhism. It is the Tokyo branch of a larger temple located in Koyasan.

The Koyasan Tokyo Betsuin was built on land donated by the Shoguns between 1596 and 1615. It is located in the Minato Ward, Takanawa in Tokyo. The Shingon Sect was brought to Japan by Kukai. The main image at the temple is that of Kukai seated in the main hall. The main hall also has the idols of many Bodhisattvas and Buddhist Deities. Notable images are that of Yamaraja, the Hindu God of death, Raga Raja, the protector of the Buddha and the five Vidyrajas or luminous Kings who are manifestations of the wrath of the Buddha against evil beings. Each Vidyaraja is depicted holding a weapon with an angry countenance because their goal was to use different methods to vanquish evil. The shrine is surrounded by paintings of important Shingon Monks like Nagabodhi and Amogavajra. Amogavajra was the teacher of Huiguo who in his turn taught the principles of Buddhism to Kukai.

The Koyasan Tokyo Betsuin was a center of learning for Shingon Priests. It is a well kept temple and a tranquil house of prayer amidst the bustle of the city.

Image by LERK on Wikimedia under Creative Commons License.
2

The Tozen- ji is a Zen Buddhist temple located in Takanawa, Minato, Tokyo. It became well known in history because of the attack by a group of anti western Samurai on the British delegation who were residing in the main building in 1857.

The Rinzai sect of Zen Buddhism established the Tozen Ji temple. The headquarters of the sect is in Kyoto. The first temple founded by Ryonan Zenji was in Akasaka and was relocated to its present location in 1636. It was called Kaijo Zennin or the Zen Forest above the Sea because it stands on the Taiko Road that leads to the sea.

The Tozen ji temple like most Tokyo Buddhist temples flourished during the Edo period. It was the family temple of powerful clans like the Date clan of Zendai, the Inaba clan of the Usuki domain and the Mori Clan of Saeki domain in the Bungo province, the Tamura clan of Ichinoseki and the Ikeda clan of the Omi province. The sword cuts and bullet marks of the attack on the British delegation by the Mito Han Samurai are still visible and a popular tourist attraction. The incident was recorded in the book, ‘The Capital of Tycoon’, by the first British diplomatic representative to Japan, Sir Rutherford Alcock.

Image by 江戸村のとくぞう on Wikimedia under Creative Commons License.
Sight description based on wikipedia
3

The Sengaku-ji is a small inconspicuous Buddhist temple in Tokyo that is rich in history and revered by the people as a symbol of Samurai loyalty and devotion. It is the site where 47 loyal Ronin or Samurai are buried. The Ronin avenged the unjust death of their Master and created history in the Edo era.

The Sengaku-ji was built in 1612. The graves of the Ronin are in a small cemetery near the temple. Their master, Asano Takuminokami of the Hyogo Prefecture unable to bear the insults heaped upon him attacked Kira Hozukenozuke at Edo castle during the reign of Shogun Tokugawa Tsunayoshi. As a result Asano was forced to commit Sepukku or ritual suicide and his loyal Samurai who had become Ronin considered his forced suicide, unjust. They planned their revenge and avenged their master’s death in 1702 by killing Kira and beheading him. They brought the head to Sengaku-ji where their master and his wife were buried and committed Seppuku. Their act is immortalized by the Kabuki play, Chushingura.

The Sengaku ji itself is a small wooden structure. A stone path leads to the cemetery where the Ronin, Asano, his wife, Oishi and Kira are buried. Each gravestone consists of a slab with their names inscribed and a stone basin where incense sticks are placed. There is a museum with a video showing the story in different languages for the benefit of foreign visitors and mannequins dressed as the 47 Ronin.
Image by Stéfan Le Dû on Wikimedia under Creative Commons License.
Sight description based on wikipedia
4

Mita Hachiman Jinja is a Shinto shrine in Mita 3-7-16, Minato, Tokyo. As with any other Shinto shrine, Mita Hachiman Jinja is home to a traditional festival that usually takes place on August 15. On the grounds of the shrine, there is a Kaguraden (hall for Shinto music and dance), a Chōzuya (place for cleansing) and a Shamusho (shrine office). A staircase leads to its entrance.
There are two shrines in precincts: Gokō Inari Jinja and Mikage Jinja, with a total area of 2975.9 m².
Image by BetacommandBot on Wikimedia under Creative Commons License.
Sight description based on wikipedia
5

Though it is small, Gyoran-ji is a very attractive temple in Minato, Tokyo. Also called the Suigetuin Gyoran-ji, it is located on the mountainside of Gyoran zaka. The deity here is of Gyoran Kanzeon Bosatsu, depicted as a maiden with hair tied in a Chinese style. It is believed that Buddha appeared in a beautiful maiden’s figure to spread Buddhism and hence the representation.
Image by Abasaa on Wikimedia under Creative Commons License.
Sight description based on wikipedia
6

The Saikai-ji is a Buddhist temple dedicated to the Pure Land Buddhist sect in Tokyo. It is located in 4-16-23 Mita, Minato Tokyo.

The Shukojan Chojuin Saikai-ji is popularly known by the locals as the Saikai-ji temple. It is dedicated to the Buddha in the form of Amitabha or the Buddha of infinite light. The temple was established by the Pure Land sect of Mahanaya Buddhism chiefly practiced today in Japan, East China, Taiwan and Vietnam. It was built on the site of an earlier temple established by the Takeshiba tradition. Like most Buddhist temples in Tokyo, the Saikai –ji flourished during the Edo period and commanded spectacular views of Edo bay. The main deity of the temple, Amitabha is called Amida Butsu or Amida Nyorai in Japanese. In this form, the Buddha is depicted sitting in meditation with or without a lotus in his hands. He is also depicted standing with his bare right hand extended outwards and flanked by his disciples, Avalokiteśvara and Mahastamapraptha on either side.

In 1621, the Saikai Temple housed the first French delegation to Japan and later became the French consulate and the residence of the consul general. A monument dedicated to the presence of the French within Saikai –ji is found on the grounds today.
Image by LERK on Wikimedia under Creative Commons License.
Sight description based on wikipedia