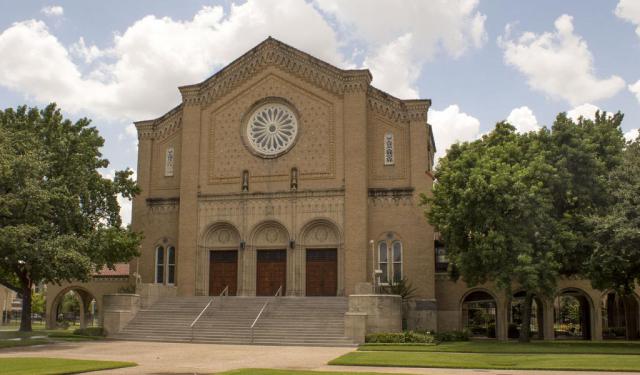 Houston, founded in 1837, has grown into one of the biggest cities in the USA. This city features a large number of churches that are of great historical and architectural interest to visitors. Take this walking tour to discover some of the most acclaimed religious buildings in Houston.
Image Courtesy of Wikimedia and 0x0077BE.
How it works: Download the app "GPSmyCity: Walks in 1K+ Cities" from iTunes App Store or Google Play to your mobile phone or tablet. The app turns your mobile device into a personal tour guide and its built-in GPS navigation functions guide you from one tour stop to next. The app works offline, so no data plan is needed when traveling abroad.

Built in the early 1900s in the Stone Gothic style, this graceful church is one of the most visited landmarks in the beautiful area surrounding Hermann Park. Its elegant bell tower could easily have been set in some European town – but not to forget the beautiful stained-glass windows and hand-carved cedar ceiling inside, both of which are outstanding to view.

St. Paul's is also known for its traditional style of worship as embodied by its renowned choir (which sometimes can be found performing with the Houston Ballet), and also for the beautiful Great Organ that currently comprises 4,359 separate pipes! Hymns, choral accompaniments and voluntaries played on the organ are an integral part of worship here.

The church has as its vision statement: "To be a cathedral for the city of Houston, embodying its diversity, inspiring faith, and leading change for the common good of all peoples and communities." Apart from the interior which is open for tours and visitors, the outside grounds are also very beautiful with many benches to sit on.

Image Courtesy of Wikimedia and i_am_jim.
2

The First Presbyterian Church is a historic house of worship in Houston. It is perhaps best known by the fact that Sam Houston used to attend services here. It began in 1845. Back then, it was just a small pine church that used whale oil lamps for lighting. A more formal structure was built in 1896. The church was badly damaged by fire in 1932, but was completely renovated in short order. The church has a colonial look, but has a Byzantine style dome and a beautiful bell tower.

In modern times, the church has over 3500 members. It is located in the Museum District of town. Besides being a house of worship, it also houses a school for children ages 2 through the 8th grade of education. The congregation has also historically been very active in other local charities in the area as well as abroad. Dr. Allen Hutcheson of this church was one of the first medical missionaries to China. The church has a rich history of missionary services.

Image Courtesy of Wikimedia and WhisperToMe.
3

The current structure was built in 1924. The firm of Sanguinet, Staats, Hedrick and Gottlieb were hired as the designers. The church has long been known for its belief in Baptist roots, but has also been a haven for progressive thinking. For instance, the church has long been an advocate of civil rights and having women in ministry. The congregation is currently independent. For the first 90 years of the church’s existence, though, it was a member of the Southern Baptist Convention of Churches.
Image Courtesy of Wikimedia and 0x0077BE.
4

The Trinity Episcopal Church was founded in the year 1893, which makes it one of the older churches in the midtown section of Houston. It was founded as a mission church from Christ Church, in order to minister to the new community that was forming in the Midtown area at the turn of the 20th Century. It is the second oldest Episcopal Church in town.

The church building itself is a beautiful example of neo-Gothic architecture. In fact, it is one of the best examples of church building in town. When you go inside, you will also be in for a treat. The local congregation has a remarkably well restored 1918 Pilcher Pipe Organ that plays wonderful music. The building also has some of the best stained glass in town. The structure was designed by the famous architectural firm of Cram and Ferguson.

In the history of this congregation, it has produced 7 clergies who have gone on to become Episcopal Bishops. In addition, famous people like Walter Cronkite and Dr. Denton Cooley were members of this famous Houston church. It is worth a visit.
Image Courtesy of Wikimedia and i_am_jim.