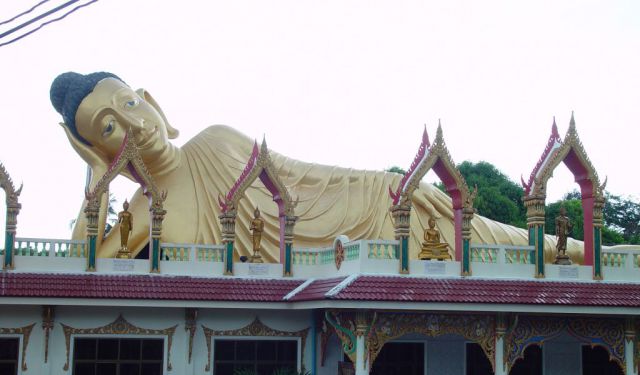 Phuket itself is a landmark, with numerous attractions, countless temples dedicated to the saints and gods and goddesses, places of architectural interest, and cultural venues. Famous throughout the world for their architectural styles and bright colours, Thai Buddhist temples will leave you impressed for a long period of time. Prepare to be impressed and take the following self-guided tour to discover temples in the city of Phuket.
Image Courtesy of Wikimedia and Michael Janich.
How it works: Download the app "GPSmyCity: Walks in 1K+ Cities" from iTunes App Store or Google Play to your mobile phone or tablet. The app turns your mobile device into a personal tour guide and its built-in GPS navigation functions guide you from one tour stop to next. The app works offline, so no data plan is needed when traveling abroad.

One of the most-visited temples of the city is Sanjao Sam San. It was built in the late 1853 and is dedicated to the Saint Mother protector of the sailors, the "goddess of the Sea." There is a tradition respected by locals: when a new boat is going to be launched on the water, a blessing ceremony is held at Sanjao Sam San, to protect the boat from weather and to protect the sailors that are on the boat. Many people come to participate in or observe the ceremony.
Image Courtesy of KoPhuket DotCom.
2

Located on Ranong road in Phuket, hidden behind all the food stalls is the colourful and spectacular 200 year old Jui Tui shrine, a temple of Put Jaw. The word ‘Jui’ refers to water while ‘Tui’ refers to mortar. The shrine was named so since the entrance has a wide canal with lots of water. Dedicated to the Goddess of Mercy, Kwum Im, this is the oldest Chinese Taoist temple in the town. The Chinese styled shrine has intricate detailing of Buddhist temples, ancient dragon motifs on bright wall banners and Chinese lanterns. The exterior appears to be like a headless and tailless turtle. The smell of the incense fills the air in the interiors which depict the Chinese gods.

The Shrine was built in 1911 with a thatched roof by the owner of the garden who gave the Kiew Ong Tai Tae. God Jee Jo, a medium asked the villagers to build the shrine. In 1982, many vegetarian participants joined hands in developing the shrine to give it present strength and beauty. The Sae Yid ( God’s Birthday) and the Vegetarian festival( celebrated in the 9th lunar month) are two annual events held by the Jui Tui temple. The shrine is the birthplace of the October Vegetarian Festival which is dedicated to the Vegetarian God, Kiu Wong In. This 9 day ritualistic festival is observed for bringing good fortune to the devout Buddhists.

Image Courtesy of Wikimedia and Surasit.khunsong.
3

If you want to see the oldest Chinese temple in the city and touch history itself, you should make your way to the Put Jaw Temple. It is a historic and cultural landmark of Phuket. Many local stories and traditions are entwined with the temple. Put Jaw commemorates Kuan Yin, the Chinese goddess of mercy. Though it is not architecturally distinctive, the traditionally-built edifice is not simple either. If you want to help to preserve this temple, you can leave a donation and the guardian will ring in a bell to symbolize your action!
Image Courtesy of Wikimedia and (WT-en) Jpatokal.
4

Wat Nua is a beautiful Thai temple situated on Ranong Street, in the old part of the city. The temple is considered a must-see for anyone who visits Phuket. Its bright colours, traditional architectural forms, attributes and furniture will intrigue and delight you. Many culturally-significant ceremonies take place at the Wat Nua temple. If you are lucky enough to have the opportunity to see some of them, be sure to do so and share your experiences with your friends and relatives!
Image Courtesy of Flickr and yeowatzup.
5

Another interesting landmark of Phuket is Wat Kajonrangsan. Locals usually call it Wat Kajon, a shorter form of the name. It is an architectural masterpiece: a fantastic mix of architectural styles can be discerned, which makes it an unusual Buddhist temple. One of the town's unique Roman-style buildings is represented by the main edifice of the Wat Kajonrangsan, so it is another intriguing place to visit.
Image Courtesy of Flickr and romainguy.
6

Wat Mongkol Nimit, another amazing Thai Buddhist temple, attracts more than a thousand visitors annually, both tourists and locals. It has a soaring roof with multiple tiers and glass tiling, and numerous glass elements inside and out. Wat Mongkol Nimit is very colourful, like other traditional and conservative temples in Thailand. The colours, chosen not just according to the architect's taste, are very significant and selected with great care.
Image Courtesy of Wikimedia and Eustaquio Santimano.
7

For a change of pace from the architecture you have already seen, we advise you to visit the Golden Dragon Temple. This is a wonderful fountain located at Thalang Road near a little river. The Dragon symbolizes the strength of people to defeat their enemies and the danger enemies bring to the nation. In time the golden temple became one of the main meeting points of Phuket, because it is easily recognizable and simple to find, even for first-time visitors to the city.
Image Courtesy of Flickr and GazerShawn.
8

The Bang Neow Shrine, also known as Thep Rasi Foundation Shrine and Tao Buang Keng was founded in 1904. It was initially a part of the shrine at Soi Romanee located in the old town of Phuket. The location of the shrine was moved on several occasions owing to various fires. The shrine complex houses 10 different buildings that lie adjacent to each other, making it unusually lengthy. The most important shrine housing the main deity is located at the centre of the structure. The interiors of the shrine have attractive printings that narrate the tales from Chinese literature and paintings that are dominated by the Chinese legendary creature, the Dragon. The columns supporting the shrine have beautifully carved dragons with details so vivid that make them seem lifelike.

The Vegetarian festival is a Bang Neow annual procession which is considered as the epicentre of the Chinese-Thai community celebrations. Firecrackers, breath-taking stunts, pierced faces and music, especially the Ma Song are some of the highlights of this festival. The pain endured by participants during acts like face piercing is considered to bring good luck to all. In addition to other events, the procession includes a parade of statues of emperor gods which gives a glimpse into Chinese tradition.