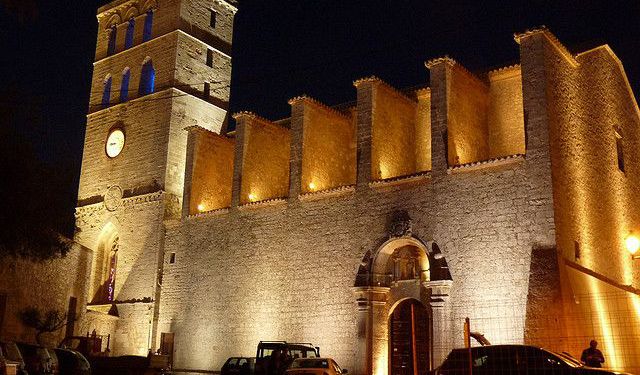 Image by GanMed64 on Flickr under Creative Commons License.

The town of Ibiza has many Catholic churches, since the national religion of Spain is Roman Catholicism. Other religions have their own places of worship as well. Ibiza churches hold masses every day. Everyone is welcome to visit during the masses. Don’t forget about the dress code specifically for churches. Discover the beauty of Ibiza's churches by following this guide.
How it works: Download the app "GPSmyCity: Walks in 1K+ Cities" from iTunes App Store or Google Play to your mobile phone or tablet. The app turns your mobile device into a personal tour guide and its built-in GPS navigation functions guide you from one tour stop to next. The app works offline, so no data plan is needed when traveling abroad.

The Iglesia del Convento de San Vicente y San Jaime is nestled in the Old Town of Ibiza at Dalt Vila. The church forms part of the UNESCO World Heritage Site inside the old city walls and is a must see on any visit to the island. Established in 1592 as a convent church, it was not granted public church status to the San Pedro Apostol Parish until 1929. Inside the church there are several chapels that can be visited and which provide a glimpse of the “old Ibiza”. The architecture of the church is an excellent example of the blending of Moorish and Christian influences on the island. Within the church there is rich iconic artwork and many statues and grottoes featuring sumptuous gold leaf.

Several of the chapels feature impressive frescoes adorned with religious artworks. The highlights of a visit to the church are the chapels of Madre de Dios del Rosario, Immaculate Conception and San Antonio. Each of the chapels has a distinctive style featuring architecture from the 16th to the 18th centuries. The church is dedicated to Santo Cristo del Cementario, and the site of the previous convent cemetery is where the Town Hall now stands. The church can be visited every day, except Mondays

Image by Juan Suau on Flickr under Creative Commons License.
2

The Catedral de Santa Maria de Ibiza is one of the island’s chief landmarks having stood at the top the “old town” of Ibiza since the 13th century. Once you step inside the walls of the Dalt Vila historical quarter, your eyes are instantly drawn to the imposing fortified walls of the church. The cathedral’s impressive stature is no mistake: following the Catalan Conquest in 1235, where the Christian conquistadors ousted the Moorish from “Yebisah” a grand cathedral was commissioned for the town. It is said that the church was built upon the site of a former Moorish mosque, which was common practice in colonial Spain in order to merge local beliefs with the Spanish royal family’s Christian faith.

The Gothic style tower and chapel are part of the original construction and the interior of the church was redone in the Baroque style in the 18th century. The ancient Monstrance made of silver and gold and dating from 1399 is the cathedral’s most treasured artifact. The eye-catching Madonna, known as Nostra Senyora de las Neus, is another key feature of the cathedral. Inside the cathedral there is a Diocesan Museum where you can learn more about the church’s historical influence in Ibiza; admission is free.

Image by Jaume Meneses on Wikimedia under Creative Commons License.
3

Sant Ciriac Chapel is indelibly linked to the history of Ibiza where it is believed that it played a key role in the island’s history. The chapel is thought to have been built on the exact site where the Catalans entered the city in 1235 in order to conquer the ruling Moorish. It is said that the Christian Catalans were easily able to defeat the two Moorish kings who ruled the island as the brothers were locked in a feud over one having stolen the other’s favorite wife.

Following the construction of the chapel in 1754 it was dedicated to the town’s patron saint, Ciriac. Sant Ciriac has been the patron saint of Ibiza since 1650, and his feast day falls on August 8th - the same day that the Catalans felled the Moorish. The tunnel entrance to the chapel emulates the arrival of the Catalan Christian conquistadors. The little barred chapel features a roughly hewn arch under the statue of Sant Ciriac, where it is said that the invaders passed. Throwing a coin through the arch is said to bring you good luck. The chapel itself is small, but its historical significance makes it an important site to visit on Ibiza.

Image by SrdjanRadovic99 on Flickr under Creative Commons License.
4

The Església de Santa Maria de Gràcia, also known as Església de l’Hospitalet, stands on the site of a former medieval hospital known as the Hospital of Arrabal. Documents dating back to 1410 mention the hospital and its chapel dedicated to Mary Full of Grace on the site. The hospital and chapel were funded by Universitat, which was an autonomous local government in medieval Ibiza. At the end of the 17th century, following the abolition of the Universitat Government, the hospital was closed and the Bishop of Tarragon, Josep Mora, ordered a grand church to be built. The church was completed in 1708 and it features a barrel vault nave inside and a whitewashed exterior with a rose window.

There are different exhibitions that are held inside throughout the year. Exhibitions are often related to modern art from Ibiza as the church is now part of the art museums acquisitions. The Església de Santa Maria de Gràcia is located within the Dalt Vila historical quarter and UNESCO World Heritage Site.
Image by Ferran Nogués on Flickr under Creative Commons License.
5

Iglesia de Santa Cruz’s constriction began in 1948. This neo-Romanic church is one of the largest on the island. A large statue of Christ was added during restoration in later years. You are welcome to come for a prayer anytime. Masses are held daily.
Image by Wing-Chi Poon on Wikimedia under Creative Commons License.
6

Yousef Ibn Tachafin Mosque is a Islamic place of worship the town of Ibiza. This beautiful mosque, named after Yousef Ibn Tachafin, offers religious facilities for those who follow the Muslim culture and traditions. It is a great spot to reflect and meditate.
Image by el7bara on Wikimedia under Creative Commons License.
7

The Iglesia de la Madre de Dios del Rosario is a newcomer to Ibiza Town constructed between 1991 and 1992 and designed by architect Josep Antoni Zornoza Tur. The style of the church stays true to classic Ibiza church design, featuring a single nave and crisp whitewashed exterior walls. Originally it was planned that the church would be dedicated to Sant Ciriac, Ibiza’s leading patron saint. However, it was dedicated to both Sant Ciriac and Madre de Dios del Rosario whose feast day falls on August 5th, just three days before Sant Ciriac’s, leading to grand celebrations on those days in Ibiza.

The church is located on one of the town’s major avenues, Ignacio Wallis, and it stands next to Ibiza town’s main post office. The church features an important statue of Sant Ciriac, which had previously been held in storage by the diocese. There are no official visiting times, but you are welcome to attend mass. Masses are held Monday through Friday at 7pm, Saturdays at 8pm and on Sundays at 11am and 8pm. Attending mass is a great way to get an authentic taste of life on Ibiza and get to know the locals. It may be possible to visit the church at other times by inquiring within.
Image by mrbill on Flickr under Creative Commons License.

Dalt Vila is the walled old city of Ibiza. The walls and fortifications are among of the best-maintained in Europe. The fortifications of the city were listed as a UNESCO Heritage Site in 1999. The bastions, one of Ibiza's cultural treasures, are definitely worth visiting. Don’t miss the opportunity to discover the Dalt Vila historical landmarks by following this guide.

The town of Ibiza houses the best museums of the island. Everyone interested in the art, culture, history, and archeology of the island will find many cultural spots in this tour. Ibiza boasts a host of ancient artifacts that you can see in the Archeological Museum, works of art by local as well as international artists and much more. Discover Ibiza's cultural heritage by following this...  view more