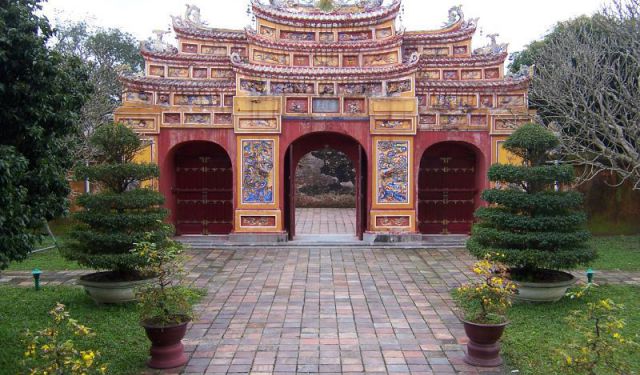 Imperial City is Hue's famous landmark that was founded in 1804. It is situated within the Hue Citadel. Here are located many temples for worshiping the deceased Emperors and members of their families. Inside the Imperial city was built the Forbidden Purple City where only members of the royal family were allowed. The Imperial City is protected by UNESCO and as a result many buildings that had been seriously damaged during the war have been rebuilt and restored. Take the following walking tour to admire all the beautiful temples, pavilions and tombs of the Imperial City of Hue.
Image Courtesy of Flickr and Ianz.
How it works: Download the app "GPSmyCity: Walks in 1K+ Cities" from iTunes App Store or Google Play to your mobile phone or tablet. The app turns your mobile device into a personal tour guide and its built-in GPS navigation functions guide you from one tour stop to next. The app works offline, so no data plan is needed when traveling abroad.

Tả Vu và Hữu Vu (Ta Vu and Huu Vu) are two buildings situated opposite each other, just at the entrance to the Forbidden Purple City from the Imperial City. These buildings were built in the early 19th century and renovated in 1899. Both have a rectangular shape and are the same size, but they differ in ornaments and in function. The last restoration of the Huu Vu was in 1977 and of the Ta Vu in 1988.
Image Courtesy of Flickr and gorik.
2

Duyệt Thị Đường (Royal Theater) is located southeast of the Forbidden Purple City. It was built in 1826 during the seventh year of Emperor’s Minh Mang reign, only for the members of the royal family. This Royal Theater is the oldest working theater in all of Vietnam. The building underwent a complete restoration and was opened to the public only in 2004. The interior of the theater will fascinate you as it was reproduced exactly as the original one. Today you can imagine yourself emperor or at least one of the royal family members, and see a play in the Royal Theater.
Image Courtesy of Flickr and wwhyte1968.
3

Cửa Hòa Bình (Peace Gate) is located in the north part of the Imperial City. It is the only gate that leads directly from Hue Citadel to the Forbidden Purple City. The gate was built in 1804 under the reign of Gia Long together with the biggest part of the Imperial City’s constructions. It was called the “praying gate” but in 1833 it was changed to the “peace gate.” The gate was seriously damaged during the war and was completely restored in 2004.
Image Courtesy of Flickr and Greg Willis.
5

Lầu Tứ Phương Vô Sự (Lau Tu Phuong Vo Su) is one of the 4 crescent emplacements of the Imperial City and is the only one located in the Forbidden Purple City. It was originally built in 1804, at the same time with the East, South and West crescent emplacements but soon it was abandoned and ruined. Under the reign of Emperor Khai Dinh, in 1923 the North crescent emplacement was built from scratch, mixing Asian and European architectural styles. Unfortunately, it only existed 45 years; in 1968 it was seriously damaged. In 2010 the Lau Tu Phuong Vo Su has opened its doors, after 20 months of hard restoration work, so that today you can admire this architectural masterpiece.
Image Courtesy of Wikimedia and Trần Anh Đức.
6

Cung Trường Sanh (Grand Queen Mother’s Residence) is also known as Longevity Palace and it was built in the North pat of the Imperial City during the first year of Emperor’s Minh Mang reign (1821). It is an ensemble of buildings that served as the residence for the Emperor’s mother and was built on a former park territory. The most recent restoration work was completed in 2007, so today you can visit the Grand Queen Mother’s Residence.
Image Courtesy of Flickr and exfordy.
7

Điện Thọ Ninh (Ninh Dien Tho) is situated in the northwest part of the Imperial City, near the main Queen Mother’s Residence. The Ninh Dien Tho was built in 1803 by the Emperor Gia Long and was usually used as a dining place for the Emperor’s mother. Ninh Dien Tho and Dien Tho House, located near it, create together one ensemble of buildings that are located inside a square shaped fenced territory of almost 20.000 m2, which could be entered only through 6 gates.
Image Courtesy of Wikimedia and AJ Oswald.
8

Cung Diên Thọ (Dien Tho House), located in the northwest of the Imperial City, was built in 1803 for the daily activities of the Queen Mother. The name of the house means “long life,” which was a wish of longevity for the Emperor’s mother. The Dien Tho House is situated near the Hung Mieu Temple and can be reached through its south gate. The house is a brick rectangular one-story building with 4 columns in front of it. Inside you’ll find well preserved ornaments and unique objects.
Image Courtesy of Wikimedia and AJ Oswald.

To to get the maximum of your stay in Hue, take time to discover its beautiful historical sites dating back to when the city was the seat of the Nguyen imperial dynasty and also the capital of Vietnam (until 1945). This self-guided walk includes a number of historic sites, such as the Imperial City, palaces and shrines, as well as the Forbidden Purple City (former imperial residence), among other...  view more