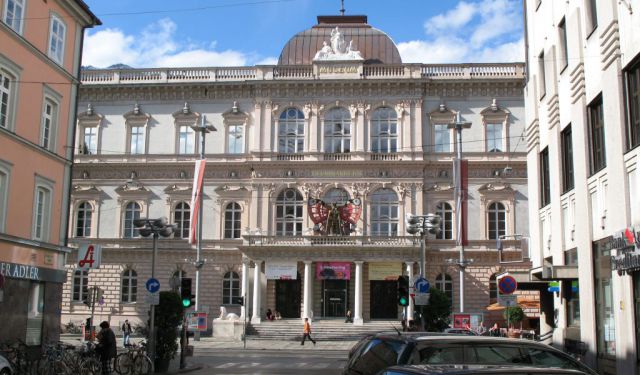 Image by Andrew Bossi on Wikimedia under Creative Commons License.

Innsbruck is an old city and the capital of Tyrol Province, Austria. Innsbruck is an amazing town with a rich history that is evident through the large number of museums and landmarks presented in the region. Experience the culture of Innsbruck with this guide of the city's museums.
How it works: Download the app "GPSmyCity: Walks in 1K+ Cities" from iTunes App Store or Google Play to your mobile phone or tablet. The app turns your mobile device into a personal tour guide and its built-in GPS navigation functions guide you from one tour stop to next. The app works offline, so no data plan is needed when traveling abroad.

Tiroler Volkskunstmuseum is he Tyrolean Folk Art Museum, which was established more than a hundred years ago, in 1888. Actually it is tagged as one of the most beautiful folklore museums of Europe, so I'd suggest you not to miss the chance and visit it while walking through the old streets of the city. Here are gathered and displayed one of the most wonderful crafts, furniture, accessories, ceramics, artistic creations, clothes and lots of other art works. Through the museum you will be guided by the Lucifer a kind of provocative agent. You will have the opportunity to enjoy various exhibitions and performers.

Image by Javier Carro on Wikimedia under Creative Commons License.
Sight description based on wikipedia
2

The Tiroler Landesmuseum Ferdinandeum is an impressive infrastructure with a vast collection of history, natural science, music, and art. The museum was established almost two centuries ago, in 1823 during the Austro-Hungarian Empire. In that time it was the one of the oldest museums but in present it is considered to be one of the world's top museums.
Image by Bbb on Wikimedia under Creative Commons License.
Sight description based on wikipedia
3

Anatomisches Museum is a Museum of the Institute of Anatomy, Medical University of Innsbruck. The museum has plenty of things to do for the kids, as they will cherish the opportunity to learn how their bodies are made and what body parts do what.

Grassmayr is a unique place to visit, situated on the Leopoldstraße. The Bell Fundry is over 400 years old and still managed by the same family. Besides the specialized fundry, tourists may examine the museum and a wonderful sound room. The old bells are considered some of the finest in the world.

Image by Appy29 (very busy mostly out of station ) on Flickr under Creative Commons License.
5

The Tiroler MuseumsBahnen (TMB) s a railway society in Austria whose aim is the preservation and/or documentation of the historically important branch lines (known as Localbahnen) and their rolling stock in the state of Tyrol. When, in 1983, it finally became clear that the 79-year old railbuses on the Stubai Valley Railway (Stubaitalbahn) were to be withdrawn from service, the Tiroler MuseumsBahnen Society was founded in May of that same year "with the aim of preserving these historically important vehicles for posterity."

Although initially the prospect of acquiring suitable premises for the society did not look good, thanks to political supporters, including the then mayor, Nischer, the former locomotive depot and part of the Stubaital station (waiting room and movements office) were able to be acquired and the Localbahn Museum was opened as early as summer 1985.

Operation hours: From May to October, every Saturday: 9 am - 5 pm.
Image by Christian Haisjackl on Wikimedia under Creative Commons License.
Sight description based on wikipedia
6

Kaiserjäger is the local Military Historical Museum, or as it's also called, the Tyrolean Kaisers Infantry Museum. The museum displays the history of battles which contributed to an elite Austrian and Hungarian period between 1816-1918. Among the exhibits, tourists will study will soldier's uniforms, armor, medals, and other traditional military gear.