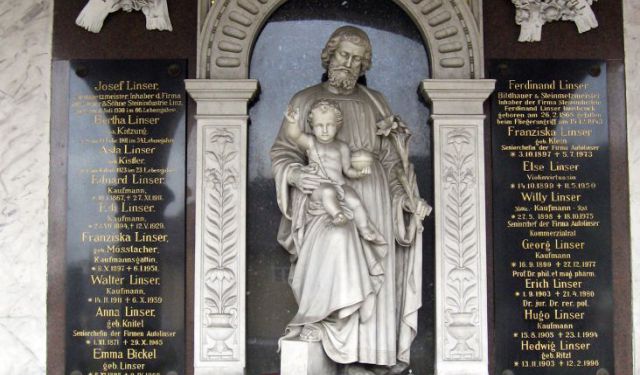 When you begin you religious experience at Innsbruck, you should first decide what you want to get out of the rare opportunity. Are you searching for a pleasant time, peace, serenity, and/or beautiful religious sights? If so, you have came to the right place.
How it works: Download the app "GPSmyCity: Walks in 1K+ Cities" from iTunes App Store or Google Play to your mobile phone or tablet. The app turns your mobile device into a personal tour guide and its built-in GPS navigation functions guide you from one tour stop to next. The app works offline, so no data plan is needed when traveling abroad.

Klosterkirche is one of the most beautiful churches in town, wonderfully decorated inside and depicted outside with bright colors. Locals flock to Klosterkirche, seeking peace and time to gather their thoughts as they pray. Make sure you do not miss this once in a lifetime opportunity.
Image by Daderot on Wikimedia under Creative Commons License.
2

Kapuzinerkirche is a marvelous church, which is the German name for the Capuchin church in Innsbruck. Kapuzinerkirche is an old church, a place of serenity and peace for your soul and mind. Archduke Ferdinand II of Tyrol, Arcgducess Anna Catherine, and their daughters laid the first stones of this church.
Image by Kluibi on Wikimedia under Creative Commons License.
3

Jesuitenkirche, German for "Jesuit Church," is considered one of the most important churches of Innsbruck. The church is an old basilica, built during 13 years of the 17th century. Mass is held in the national language, but on Saturdays, there is a special English Mass held in the crypt.
Image by Andrew Bossi on Wikimedia under Creative Commons License.
4

The Hofkirche is a Gothic church built 1553–1563 by Ferdinand I as a memorial to his grandfather Maximilian I, Holy Roman Emperor, whose cenotaph within boasts a remarkable collection of German Renaissance sculpture. Although Maximilian's will had directed that he be buried in the castle chapel in Wiener Neustadt, it proved impractical to construct there the large memorial whose plans he had supervised in detail, and Ferdinand I as executor planned construction of a new church and monastery in Innsbruck for a suitable memorial. In the end, however, Maximilian's simple tomb remained in Wiener Neustadt and the Hofkirche serves as a cenotaph.

The church was designed in the traditional German form of a hall church that consists of three naves with a setback three-sided choir, round and pointed arch windows, and a steep crippled hip roof. Its layered buttresses reflect compromise of contemporary Renaissance design with German late Gothic style. The interior contains galleries, high slender colonnettes of red marble with white stylized Corinthian capitals, and a lectern. The gallery's original ribs made from sandstone from Mittenwald have been preserved, but after the main vault was damaged by earthquake in the 17th century, it was rebuilt in the baroque style.

While walking through the numerous streets in Innsbruck, visitors will be sure to notice the multitude of Baroque styled buildings, edifices, and churches. The Dom zu St. Jakob, German for the Cathedral of St. Jacob, is one of the most grand. The church dates back to the 18th century and amazingly survived the Second World War.
Image by Túrelio on Wikimedia under Creative Commons License.
6

Spitalskirche is another old church, located in the center of town. Spitalskirche, or as it's also called Alte Spitalskirche zum Hl. Geist, is a Roman- Catholic Church of the Holy Spirit Hospital. Basilica dates back to the 14th century, where in 1326, the building was transformed into a hospital while also serving as a church.
Image by Andrew Bossi on Wikimedia under Creative Commons License.
7

Servitenkirche, also known under the name Servite Church, is located at the Maria-Theresienstraße in Innsbruck. Doors are open for prayer every Saturday and Sunday, as well as during the week. It is a nice church, depicted in beautiful frescoes, icons, candles, and sacred images. The church is attached to the St. Joseph's Basilica. It was built during 1613-1616.
Image by Andrew Bossi on Wikimedia under Creative Commons License.
8

Herz Jesu, German for "Heart of Jesus," is a minor basilica with a Renaissance style. The church is a nice place to clarify your thoughts and the needs of your heart and soul. Herz Jesu is located south of the Old city.
Image by Simon Legner on Wikimedia under Creative Commons License.
9

Innsbruck is dominated by the fantastic Gothic style architecture and Johanneskirche is a perfect example of this sacred design. The construction of the Roman Catholic Church of St. John began in 1729 and was designed by the famous architect, Anton Gumpp. The church honors the canonized St. Johann Nepomuk. It's interior is made in the Rococo style and is embellished by a multitude of fabulous frescoes made by Josef Schöpf.
Image by Hafelekar on Wikimedia under Creative Commons License.