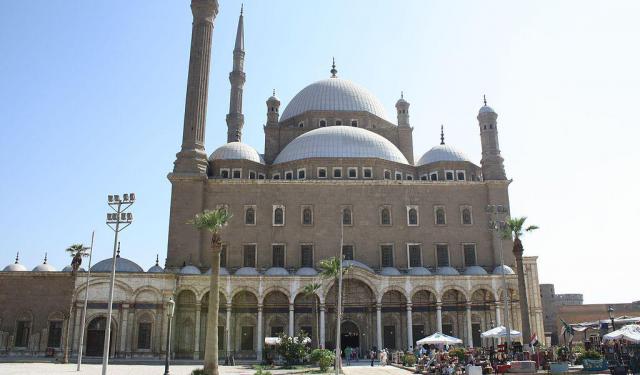 The beautiful historical mosques of Cairo will impress any visitor. There is a significant variety of them here, dating from the earliest periods of Islam up to modern times. This self guided walking tour will take you through to the most remarkable Islamic structures in Cairo.
Image Courtesy of Wikimedia and ciochond.
How it works: Download the app "GPSmyCity: Walks in 1K+ Cities" from iTunes App Store or Google Play to your mobile phone or tablet. The app turns your mobile device into a personal tour guide and its built-in GPS navigation functions guide you from one tour stop to next. The app works offline, so no data plan is needed when traveling abroad.

The Mosque of Ibn Tulun is one of the largest, oldest and best-preserved mosques in Egypt. Some scenes of the James Bond movie, 'The Spy Who Loved Me', were filmed here.

The mosque was built between 870 and 879 by the Abbasid Governor Ahmad Ibn Tulun. He was a slave who founded the Tulunid Dynasty that ruled Egypt between 868 and 905. After the fall of the dynasty, the mosque was neglected for many years. It was restored in 1296 by the Mamluk Sultan Lajin. A recent major restoration was carried out in 1999 and the courtyard was paved and the fountain was covered with black marble.

Ibn Tulun Mosque covers an area of 6 acres. It is the third largest Mosque in the world. The galleries have intricately carved stucco arches. It was the first time that stucco was used in Egypt. The unique feature of the building is the minaret. Unlike other minarets, it has a spiral structure. The model is from the minarets found in Samarra, Iraq. A spiral staircase is found on the outside. The minaret arches have a horseshoe shape resembling the type of arches found in Spain and showing the influence of Muslim refugees who fled here after the re-conquest of Spain from the Moors.

Why You Should Visit:
To see what many people agree is one of the most beautiful mosques in Cairo, besides being the oldest intact mosque in the whole of Egypt.
You can enter the mosque to soak in the atmosphere or you can ask the people working there if you could just climb the minaret (me'zana) to get an amazing view of the old city.

Tip:
Before climbing the stairs to the minaret, you can go to the top of the mosque (one set of stairs leads to both) and see the whole place from above.
If you do go inside, don't forget to tip the guy that's going to cover your shoes with pieces of cloth, so that you don't have to take your shoes off.

Al-Rifa’i Mosque was built on the site of a small shrine dedicated to the medieval Islamic saint Al-Rifa’i. It was later called the Royal Mosque because part of the complex houses the mausoleum of members of the royal family and serves as a storehouse of many royal treasures.

The mosque was commissioned by Khushyar Hanim, the mother of the then Pasha, Khedive Isma'il Pasha. It was built between 1869 and 1912. The building has many architectural styles from the Mamluk period of Egyptian history. The dome and the minaret are particularly reflective of Bahri Mamluk Architecture that was popular in 19th and 20th century Egypt. It consists of a large prayer hall, shrines for the three Islamic saints, Al-Rifa’i, Ali Abi-Shubbak and Yahya al-Ansari and a mausoleum where members of the royal family are interred. It has a rectangular shape and covers an area of 6500 square meters.

The Al-Rifa’i Mosque is the final resting place of the Egyptian Royal family and other Royals. Kushyar Hanem who commissioned the mosque and her son, Ismail Pasha and the last reigning King of Egypt, King Faroukh are interred in the mausoleum. The last remains of Reza Shah Pahlavi of Iran were first interred in the mausoleum until they were returned to Iran after World War II. The burial chamber is today the final resting place of his son, Mohammed Reza Pahlavi. The Al-Rifa’i Mosque is the living reminder of Egypt’s royal past.

Why You Should Visit:
Probably the most impressive and beautiful building of the neo-Mamluk style (the style imitating medieval Cairo architecture).
Along with the much older but equally large Madrassa of Sultan Hassan next to it, it forms one of the most extraordinary set-pieces of Islamic Cairo.

Tip:
At all times, throughout the building, make sure to look up at the richly decorated ceilings, or at the stone portals of the various entrances to the mosque.
Admission is charged. Wear socks and bring some small cash to tip the shoe collector.
Women: dress modest, cover your ankles, knees and arms. Wear headscarf.
Image Courtesy of Flickr and Dan.
3

Located at the Citadel in Cairo, the Al-Nasir Muhammad Mosque was built in the 14th century. It was here that the Sultans of Egypt performed their Friday prayers.

The Mamluk Sultan, Al-Nasir Muhammad constructed the mosque in 1318 as a place of worship for the ruler and members of the armed forces. The original structure was improved and the height increased in 1338. In the 16th century, the dome over the prayer niche collapsed. When the Ottoman Turks conquered Egypt, they ransacked the mosque and took away most of the marble paneling to Turkey. It remained a neglected structure until the British took over the administration of Cairo in the late 18th century.

Sultan Al-Nasir Muhammad constructed the mosque in Bahri Mamluk style. It had a hypostyle structure with a roof supported by columns. There is a side private room enclosed by intricate ironwork for the Sultan. The call of prayer was broadcast from the north minaret so that the armed forces and palace troops could hear it. The building is square-shaped with a central courtyard that could hold up to 5000 worshippers. The two minarets have intricately carved bulbous portions. The ceilings are covered with glass mosaics, a form of decoration used extensively by Sultan Al-Nasir Muhammad in all structures that he commissioned. The Mosque is unique in that the funds available to build it exceeded the actual cost. It remains a place of worship today and is rarely visited by tourists.
Image Courtesy of Wikimedia and Sailko.
4

4) Mosque of Muhammad Ali (must see)

The Mosque of Muhammad Ali Pasha is located at the top of the Salah-ad-Din Citadel in Cairo. It is one of the most visited sites in Cairo.

The mosque was commissioned by the founder of modern Egypt and the last dynasty that ruled Egypt. It is also called the alabaster mosque because of the extensive use of the material in the structure. Unlike other mosques in Egypt that were built in the Mamluk architectural style, it had the style of Turkish Mosques especially the Yeni Mosque in Istanbul. It was designed by the Turkish architect, Yusuf Bushnak.

The Mosque of Muhammad Ali Pasha has a central dome surrounded by four small domes and four semicircular domes. The slender minarets have a Turkish architectural style and are 82 meters high. The tomb of Muhammad Ali Pasha is located at the center of the courtyard and is made of Carrara marble. The arcaded courtyard offers a spectacular view of the city across to the pyramids at Giza. The large prayer hall is covered by a large Turkish-style dome. The Southwestern parapet offers views of Cairo, the Sultan Hassan Mosque and the Ibn Tulun Mosque.

Why You Should Visit:
As part of the Citadel that you get to explore, this mosque stands out the most, especially at night with its beautiful illumination.
Add to this the design and intricacy of the mosaic inside, which truly makes it a great antiquity.
Because it sits on top of a mountain, you can also take in expansive views of the city and the pyramids.

Tip:
Try to go early in the morning or late afternoon to avoid the heat and go on a sunny day as well – makes a lot of difference when enjoying the view!
Be sure to ask the cost of the "tour guide" assistance before you agree to hear more about the mosque.
Image Courtesy of Flickr and Dan.
5

The Cairo Citadel on Mokattam Hill is a large Islamic fortification commanding spectacular views of the city. Many landmark Mosques and museums are located here today.

The Cairo Citadel served as a place where Sultans from the Mamluk Dynasties came for the cool air and to enjoy the spectacular views. It was the Ayyubid Ruler Salah-ad-Din who realized the strategic advantage of fortifying the citadel to protect the city from the crusaders. The wall around the citadel was constructed between 1176 and 1183. It served both as a fortress and a Royal City at the time. The Mamluk Sultan, Al Nasir Muhammad regained power in the 1330s and destroyed most of the Ayyubid structures. Later the Ottoman rulers, tore down most of the Mamluk buildings in the 1800s.

Today, only the walls of the Ayyubid fortress and the Bir Yusuf or St. Josephs Well remain from the original structure. The green domed Mosque of Al Nasir Muhammad and a portion of his striped palace remain from the Mamluk era. All other structures are built by the Ottoman Rulers, in particular Muhammad Ali Pasha the founder of the last dynasty that ruled Egypt. The four museums that are now located within the Citadel are the Police Museum, the National Military Museum, the Carriage Museum and the Al-Gawhara Palace museum.
Image Courtesy of Flickr and Jorge Láscar.