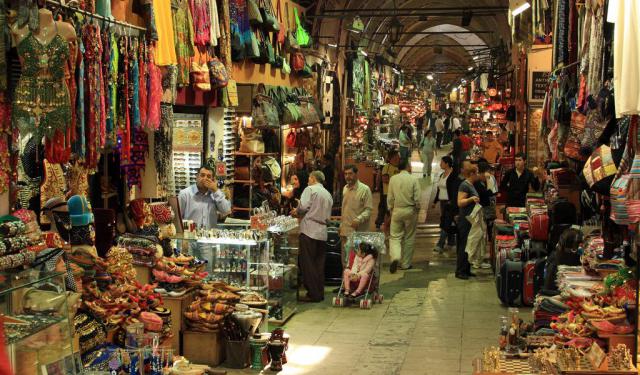 Image by Dmgultekin on Wikimedia under Creative Commons License.

Istanbul can easily claim to be one of the most colorful cities in the world. Located on the very edge of Europe, it later expanded into Asia resulting in a mixture of both cultures. When it comes to shopping, you will be amazed with the variety of goods available to buy here and the way everybody bargains - even in a grocery store. Take this tour and explore the legendary bazaars of Istanbul.
How it works: Download the app "GPSmyCity: Walks in 1K+ Cities" from iTunes App Store or Google Play to your mobile phone or tablet. The app turns your mobile device into a personal tour guide and its built-in GPS navigation functions guide you from one tour stop to next. The app works offline, so no data plan is needed when traveling abroad.

Arasta Bazaar is a well-known, albeit modest open-air market in the heart of Istanbul. Located on the north side of narrow Torun Street, behind the Blue Mosque, the bazaar was built in the 17th century with the idea to use rental revenues from its shops to subsidize the upkeep of the mosque. For many years later, the shops remained empty until the tourism boom of the late 1980s-90s prompted their restoration, making it one of Istanbul's most-visited tourist markets.

If you're tired of or simply don't have time for the Grand Bazaar but still need to buy authentic goods or souvenirs, Arasta Bazaar is a good alternative. Considerably smaller (just a fraction of the Grand Bazaar), cleaner, quieter and less crowded, the Arasta makes both shopping and sightseeing very convenient. Here you will find more than 70 stores selling carpets, kilims, jewelry, pottery, spices, teas, coffee, ceramics, textiles, handicrafts, souvenirs, tiles, scarves and apparel in abundance.

Prices may appear a bit higher than the Grand Bazaar, but still reasonable, and even more so after haggling. The place is quite relaxing to stroll through whilst being invited by dozens of accomplished salesmen speaking fluent English (and a half dozen other languages, too), with bottomless treasure troves of ironic humor and topical jokes, to have a look, take a seat, sip some Turkish coffee or tea and consider the purchase.

Whilst here, you can also visit the Great Palace Mosaic Museum underneath the bazaar. The mosaics found in the environs of the Arasta during excavation works in the 1930s proved that the territory once formed part of the Byzantine-era Great Palace complex.


Image by Dmitriy Fokeev on Flickr under Creative Commons License.
2

Located in the center of Istanbul's Grand Bazaar, in the hall of Cevahir Bedesten, is the so-called Antique Market, a place where vintage or collectible items can be found, such as antique mirrors, water pipes, watches and clocks, candlesticks, old coins, silver and gold jewelry sets adorned with coral and turquoise, furniture, copperware, amber prayer beads, inlaid weapons, icons, and much much more.

Tip:
Just don't expect to find there any actual “antiques”, like a real Roman statue or ancient Greek coins. But even if you do find some old treasures of this sort, please note that it is against the law in Turkey to take antiques out of the country and may involve even a jail sentence.

One of the oldest markets in the world, the Grand Bazaar of Istanbul or the Kapalicarsi (“covered bazaar”) has more than 58 covered streets and more than 4,000 shops. Anywhere from a quarter to half a million visitors come here daily.

The Grand Bazaar was built from 1455 to 1461 and has been open ever since. It is famed for its exquisite Turkish jewelry, silver decoration pieces, spices, Turkish delights (famous Turkish sweets), pottery and carpet shops. Visitors can also find leather goods, gold and diamond jewelry, as well as clothing here in rich supply.

The bazaar is particularly famous for the “Turkish Evil Eye” – an amulet made of blue and white glass believed to ward off evil spirits. Almost every street here has an “evil eye” stall, with many variations of the amulet being sold to tourists.

Originally the bazaar contained bedestens, which are domed structures used for storage, and was enlarged during the 16th century. After a major earthquake in 1894, the bazaar went under major restoration. Today, it contains two hammams (Turkish baths), two mosques, four fountains, as well as many cafes and restaurants.

Why You Should Visit:
The bazaar's centuries-old history can still be seen from the countless frescoes on the many ceiling arches and ancient columns; however, the main charm lies in its chaotic organization. Every turn is full of unexpected surprises – you will never know what you're going to find! No purchase is necessary to join this festivity.

Tip:
If you are in need of Turkish Lira cash, this is an excellent place to exchange.
Be prepared to walk away if the seller does not agree with your asking price (or watch what happens next!).

Sahaflar Çarşısı (Old Book Bazaar) is located between Fesçiler Gate and Beyazit Square in the Fatih district of Istanbul, and has been in place since the 15th century. Traditionally, during the Ottoman period, bookstores were situated close to theological schools, known as madrasahs. After the Bazaar was constructed in 1460, the bookstores were gathered in a specially designated section.

At the end of the 19th century, the stores were severely damaged by an earthquake and subsequently had to be moved to their current location. Another disaster – huge fire – struck in 1950 and also had its toll on the Bazaar, reducing to ashes many of its valuable manuscripts. Shortly afterwards, all the bookshops were nationalized and rebuilt. Nowadays, there are in total 23 book stores in the Bazaar. Installed in the middle of it is the bust of İbrahim Müteferrika, the person who introduced printing press to The Ottoman Empire.
Image by Matthias Süßen on Wikimedia under Creative Commons License.
5

No visit to Istanbul is complete without stopping by the atmospheric Spice Bazaar, one of the largest and most famous bazaars in Istanbul, located near the Galata Bridge in the Eminönü quarter of the Fatih district. While the Grand Bazaar may be the largest and most popular covered shopping complex in the city, this spice market is by far the most colorful, fragrant, and often the most fun.

Built in 1664, as part of the Yeni Camii (New Mosque) complex, it is known locally as Mısır Çarşısı, which is sometimes translated to either "Egyptian Bazaar" or 'Corn Market' (as mısır in Turkish means both “Egypt” and “corn”). There are several documents, however, suggesting that initially the place was called "New Bazaar" and eventually got the name "Egyptian" because its construction was subsidized with proceeds from the Ottoman eyalet of Egypt in 1660. As part of the New Mosque, the revenues obtained from the shop rentals within the bazaar were used for the mosque upkeep.

Traditionally, this place has been the center of spice trade in Istanbul, although in recent years it has seen more and more shops of other type move in. Currently, the bazaar has a total of 85 shops under its roof selling spices, Turkish delight and other sweets, dried fruits and nuts, tea, Turkish coffee, pottery, jewelry, and souvenirs. Overall, the market is a wonderful place to stroll and enjoy the sights, smells and, of course, tastes. Of course, as in all tourist destinations, the discussion of price here is essential, so haggling is welcome.