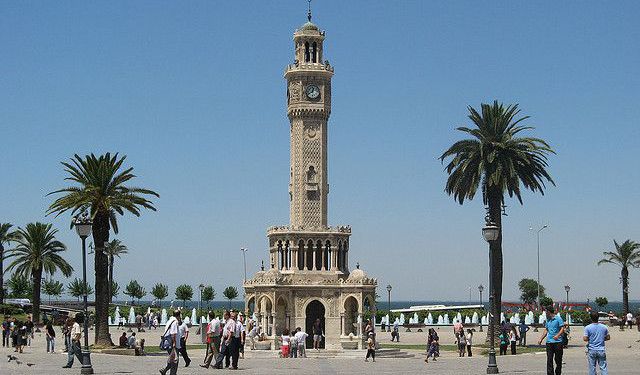 Image by dungodung on Flickr under Creative Commons License.

Izmir is one of the most popular tourist destinations in Turkey. This is widely due to the number of attractions as well as the diversity of the city. Karataş is an especially popular neighborhood in Izmir and one that provides several outlets near the waterfront as well as close to the downtown.
How it works: Download the app "GPSmyCity: Walks in 1K+ Cities" from iTunes App Store or Google Play to your mobile phone or tablet. The app turns your mobile device into a personal tour guide and its built-in GPS navigation functions guide you from one tour stop to next. The app works offline, so no data plan is needed when traveling abroad.

Pasaport Quay is an historic and beautiful walking area alongside the water bank of Izmir's port. It's a very pleasant place, with a plethora of very popular cafés, restaurants and nightclubs. Also, if you visit Pasaport Quay during the evening, you'll likely encounter live music performed directly on the streets.
Image by Dario Moreno on Wikimedia under Creative Commons License.
2

Konak Pier was designed by Gustave Eiffel in 1890, within the boundaries of the central metropolitan district of Konak, near the city's historic center Konak Square. It was originally built as warehouse together with the French customs house on the nearby Pasaport Quay during the renewal of Izmir's portuary infrastructures as of 1867. Since then, it became one of the landmarks of Izmir. There are plans to extend Konak Pier compound to include a large marina once suitable adjacent space is made available.
Image by B.güzin35 on Wikimedia under Creative Commons License.
Sight description based on wikipedia
3

İzmir Clock Tower is a historic clock tower located at the Konak Square in Konak district of İzmir. The clock tower was designed by the Levantine French architect Raymond Charles Père and built in 1901 to commemorate the 25th anniversary of Abdülhamid II's (reigned 1876–1909) ascension to the throne. The clock itself was a gift of German Emperor Wilhelm II. It is decorated in an elaborate Ottoman architecture. The tower, at a height of 25 meters, features four fountains, which are placed around the base in a circular pattern, and the columns are inspired by North African themes. The clock tower was depicted on the reverse of the Turkish 500 lira banknotes of 1983 to 1989. In the former Balkan provinces of the Ottoman Empire, particularly in present-day Serbian, Bosnian and Montenegrin towns such as Belgrade, Prijepolje, Sarajevo, Banja Luka, Gradačac and Stara Varoš, similar Ottoman era clock towers are still named Sahat Kula.
Image by Patty OK on Flickr under Creative Commons License.
Sight description based on wikipedia
4

Hükümet Konağı (the Government House) is located at Konak Square. The government house was built between 1868 to 1872. Hükümet Konağı is a beautiful structure with a very strong historical importance as its the symbol of Turkey's liberation. During the year 1970, Hükümet Konağı was damaged to a fire, but later renovated.
Image by Mr. Vehbi Moğol on Wikimedia under Creative Commons License.
5

Izmir Kız Lisesi is the first high school for girls after the declaration of the Republic. There were several attempts prior to 1922 to open a school for girls, however they all proved to be unsuccessful. Thus, Izmir Kiz Lisesi is a celebration for women and a true landmark of the city. The main building of the school went through a fire during 1985, but was later renovated.
Image by spineless on Flickr under Creative Commons License.
6

Dario Moreno House is the famous home of the well known singer, compositor, and "man of art". The house is located on one of the most beautiful little streets of Izmir (also bears singer's name). It's a classic example of the architecture from the early 20th century and a great tourist destination.
Image by İlknur Kostak on Flickr under Creative Commons License.
7

Asansör (Turkish for "elevator") is a building in İzmir's Karataş quarter, within the boundaries of the metropolitan district of Konak. It was built in 1907 as a work of public service by a wealthy Jewish banker and trader of that period, Nesim Levi Bayraklıoğlu, in order to ease passage from the narrow coastline of Karataş to the hillside, the elevator within the building serving to carry people and goods through the steep cliff between the two parts of the quarter. In time, the small street that led to the building also came to be known under the same name, Asansör Street (Asansör Sokağı). In the 1940s, one of the residents of the street was the singer Dario Moreno, who was to attain fame later. It was recently restored and since then, became one of the landmarks of İzmir. The street was renamed Dario Moreno Street in memory of the singer.
Image by Yılmaz Uğurlu (metoikos_) on Wikimedia under Creative Commons License.
Sight description based on wikipedia
8

Beth Israel Synagogue is one of two most important synagogues in Izmir at present time. It is also very popular among tourists. The structure was built in 1907 for the big Jewish community that lived in the area at the beginning of the 20th century. The building features some amazing wooden decoration in the interior as well as offers two different levels for various purposes.
Image by Yabancı on Wikimedia under Creative Commons License.
9

Halil Rifat Paşa Mansion was built in the 19th century for Halil Rifat Paşa. Halil Rifat Paşa Mansion is a beautiful structure made of stone with some breathtaking gardens surrounding the complex. The mansion was also home to many well known families of Izmir. Today, the mansion has been transformed into an Education Center and Library. The ground floor provides an art gallery, reading rooms, administrative rooms, kitchen, cellar, conference and study room.
Image by Süleyman Tevfik on Wikimedia under Creative Commons License.